An approach similar to dropping sonobuoys in the water to find a lurking submarine might be taken to locate hidden fires in the inaccessible spaces of an airplane.

This approach did not spring immediately to mind. Rather, it occurred in the context of a Canadian company’s concept for a dual-airflow system in transport category aircraft. Infrared (IR) detectors to provide warning of a fire are among the company’s array of aerospace products. Why not marry the airflow concept with IR detection to provide a quantum advance in fire safety?

To be marketed as JET-AIR, the system under development by Montreal-based Air Data Inc. divides the fuselage air circulation into two separate flows. One flow of sterilized and humidified air, providing a more healthy and comfortable environment for the passengers, enters into the cabin. The other goes into the envelope, or the space between the cabin liner and the fuselage. For normal operations, piccolo tubing in the envelope provides a controlled flow of air into the envelope. It is at a slightly higher pressure than air going to the cabin.

The very slightly higher pressure in the envelope serves as a barrier to the entry of humidified cabin air into the envelope, especially near the ceiling. The buildup of water condensation in this area is sometimes known as “rain in the plane.” In existing designs, the water accumulations serve as breeding grounds for germs. They can degrade wiring insulation and electrical systems, and eventually will contaminate many of the thermal acoustic insulation blankets. Condensation is the primary cause of in-fuselage corrosion and microbial blooms within air conditioning ductwork.

This conceptual circulation system provides germ-free humidified air to occupants and a flow of dry air into the envelope (see illustrations below). An electronic control unit (ECU) automatically adjusts cabin and envelope airflows to maintain positive pressure in the envelope through all phases of flight.

Second, the concept can provide an additional margin of safety should a fire break out in the inaccessible spaces between the passenger cabin and the airplane’s outer metal skin. In the event of smoke and/or fire in the envelope, the airflow into the envelope can be reversed. In this event, the piccolo tubes and the central conduit can facilitate the evacuation of smoke and toxic gases, preventing their entry into the occupied cabin. In addition, when the flow is reversed, a more direct means than the floor vents is available through the panel joints to evacuate smoke and contaminants from the cabin.
Jean-Pierre Lepage, president of Air Data, says the concept of pressurizing and depressurizing the envelope as a means of controlling and evacuating smoke in the cabin emerged from research dating back to the mid-1990s. Development is now focused on refining the concept into a production-ready system that can be installed on new aircraft or retrofitted onto existing aircraft, says Lepage.

For smoke evacuation, larger conduits may be necessary for some widebody aircraft. But they can be run under the floor rather than in the “attic” space over the cabin, he suggests.
The envelope isolation and the flow blockers appear to be keys to system performance. The arrangement offers a means to reduce toxicity in the event of an under-way fire in the cockpit or cabin (although this potential capability also may depend upon having an independent backup power supply).

Regarding power requirements in an emergency situation, according to Lepage, “the electronic control of the system is low-power and could be connected to the aircraft essential bus, or it could alternatively have its own power backup system.”
“As far as depressurization of the envelope during a fire incident, for moderate or high altitude, the outside atmospheric low pressure would be used directly, and for low altitude, a static venturi air pump which requires no electrical power would be used,” Lepage explains.

If the dual-airflow concept were augmented by an array of infrared fire detection devices, the system would mark an awesome leap forward for coping with in-flight fire. An extended operations (ETOPS) aircraft so equipped would be a much safer proposition. Aircraft presently approved for ETOPS flights have negligible capability for coping with fire in inaccessible spaces, save for the fire detection and suppression systems in the belly holds.

Consider installing IR fire detectors behind the liners and incorporating them into a “mapping cockpit display” to determine any fire (electrical in particular) and its behavior behind the cabin linings (smoldering, suppressed or progressing). Infrared sensors could be positioned such that relative temperatures sensed would allow a “fix” on the fire—much the way sonobuoys allow determination of a submarine’s position by comparison of their detected sound amplitudes. Such a capability would be superior to the Swissair “Modification Plus” program, featuring IR video cameras with their limited deployment, limited field of view, and reliance on the pilot’s picking up the smoke on the cockpit video monitor (October 2001, page 59).

To be sure, the smell of smoke can be an early harbinger of doom, but it may waft in different degrees of pungency, and the timing of its arrival can be interrupted by checklist-induced airflow changes. Yet, once the pilot sees smoke, he is faced with the conundrum of determining its origin, since under-floor smoke can rise into the crown ceiling area just as a thermal rises. Without relative indications of local temperatures from IR detectors, the pilots cannot pinpoint a fire’s exact location. Because of airflow ventilation behind cabin linings, IR mapping inside the pressure hull holds the advantage of giving the crew information that escaping smoke cannot—the position of the hottest area.

Infrared detectors could be networked to map out a fire locale for a cockpit display (cathode ray tube or flat panel). It would show the location and the rate that fire anywhere on the airplane is spreading, or not spreading. Indeed, given that an ETOPS airplane must be able to suppress a fire until it can land (up to 195 minutes), such information would be critical. It would reassure the pilots that the fire was not spreading, i.e., was truly suppressed.

Conversely, pilots would be much better informed if the fire was spreading and a ditching was inevitable. IR mapping also could be used in cargo holds and in otherwise unmonitored electronics and equipment (E&E) bays.

The IR mapping concept suggests a marketing moniker. A catchy and memorable name would, in the course of time, become inextricably linked with the concept. “Plotfire,” “Hotspotter” and “Arcscout” come to mind as functional descriptors.
If the JET-AIR system featured parallel piping that could carry nitrogen enriched air (NEA) to areas behind the cabin linings and lavatories—i.e., to hot spots where Halon suppression could not be used in the concentration required in the cargo holds—the system would offer another advantage at a negligible weight penalty. This would be especially true if fuel tank safety systems are producing NEA, which could be switched to the envelope piping in the event of a hull fire.

To be sure, fire suppressants such as Halon can be injected into the envelope to extinguish a fire or an incipient fire (smoldering). But onboard supplies of Halon are limited, whereas a steady supply of NEA can be produced by the fuel tank inerting system.

The JET-AIR system also seems to offer, as a byproduct of its better filtration, a means of minimizing accumulations of dust behind cabin linings. Less dust is less hazardous tinder for a fire.

Together with fire-resistant thermal acoustic insulation blankets, an aircraft with the JET-AIR system, infrared mapping and NEA injection should be relatively fireproof—to the extent that an electrical fire could be pinpointed and displayed. This notion of fireproofing was raised explicitly by the Transportation Safety Board (TSB) of Canada in the course of its investigation into the recent mother of in-flight fire disasters, the September 1998 crash of Swissair Flight 111. TSB officials have called for an integrated, strategic approach to in-flight fire prevention and fire fighting. The JET-AIR concept, in concert with infrared mapping and the NEA influx, suggests one form that vision could take. 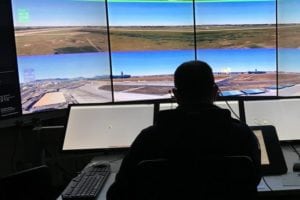