ARINC Inc. has introduced a Class 2 electronic flight bag (EFB), the first Class 2 EFB for commercial airliners, it says, that can display real-time surveillance video of activity near the flight deck door, in line with current and expected regulatory mandates. Various approved video cameras can be managed in groups of four—up to 16 with the available Ethernet hub. The company's eFlightDeck combines a 10.4-inch or 8.4-inch touch-screen monitor and a dedicated computer.

Airbus has selected Matsushita Avionics Systems' eX2 in-flight entertainment and communications system for installation in an A380 development aircraft. The system will be installed in MSN007, the aircraft Airbus will use for "route proving," in late 2005. With devices such as "secure digital" (SD) and smart cards, and with personal menus, the eX2 is designed to allow passengers to customize their in-flight environment, offering audio/video on demand, games, meal timing choices, e-mail access, etc. Visit www.mascorp.com.

U.S. Naval Air Systems Command (NavAir) PMA-271 has awarded Rockwell Collins a $79 million contract to provide Block I modification upgrades for the Navy's fleet of E-6B aircraft. The program, potentially worth some $300 million, calls for an open system architecture for the mission avionics. Collins also will upgrade primary mission systems, including the digital airborne intercommunication switching system (DAISS) and intercommunications system (ICS), the mission computer set, and the UHF command, control and communication system. The E-6B's electrical power and cooling systems will be modified to improve preflight, post-flight and ground alert operations. The upgrade equips the E-6B for digital warfare and the network centric environment. Visit www.rockwellcollins.com.

Honeywell has obtained Airbus certification of the AutoTilt and dual-redundant antenna drive functions supporting Honeywell's RDR-4B weather radar. This enables these functions to be factory-installed in new Airbus transport aircraft. The AutoTilt function uses terrain elevation data to continuously and automatically adjust the antenna tilt setting to ensure the antenna is aimed at the weather rather than the sky above it or the ground below it, says Honeywell. The dual-redundant antenna drive mechanism, meanwhile, makes it more than 600 times less likely that the radar function will fail in flight, compared with previous designs, according to a Honeywell release. Visit www.honeywell.com.

Sandel Avionics, Vista, Calif., has received supplemental type certificate (STC) approval for installation of its Class A terrain awareness warning system (TAWS) in Beech 1900C and 1900D turboprop aircraft. This enables 1900 operators to meet the Federal Aviation Administration (FAA) TAWS mandate. The 3-ATI-sized ST3400 is an integrated TAWS computer and color display that meets or exceeds technical standard order (TSO) C151b with both its Class A and Class B versions, according to Sandel. The Class A ST3400 is priced at $34,500 and the Class B ST3400 lists for $20,950. Visit www.sandel.com.

AMS, a joint venture between Italy's Finmeccanica and UK's BAE Systems, has opened an office in Washington, D.C., to strengthen its market presence in the United States. Dennis Kennelly has been appointed vice president and placed in charge of the new office. Visit www.amsjv.com.

Montreal-based CMC Electronics Inc. will supply its GPS-based flight management system (GPS/FMS), the CMA-900, to equip 20 Brazilian Air Force aircraft, including C-130s, Boeing 707s, P-95s and Learjet-35s. CMC won the award in March 2004. Deliveries were to begin in May and be completed by July 2005. Visit www.cmcelectronics.ca.

The U.S. carrier, World Airways, has selected Universal Avionics System Corp.'s terrain awareness warning system (TAWS) for retrofit in its fleet of three MD-11s. Hollingsead International is providing the integration engineering, installation kits and Federal Aviation Administration approval. Each installation will consist of a single TAWS and GPS sensor. TAWS information will be shown on the MD-11's electronic flight instrument system (EFIS) displays. The retrofit program is to run from June 2004 to March 2005. World Airways, headquartered in Peachtree City, Ga., also operates DC-10s and has announced plans to introduce the Boeing 767-300ER. Visit www.worldairways.com and www.uasc.com.

Northrop Grumman has announced two activities designed to improve the capabilities of military aircraft. Its Baltimore-based Systems Development and Technology Division heads a team selected by the Defence Logistics Organization of the UK Ministry of Defence to compete in Project Helix, which calls for a new mission suite in the Royal Air Force's Nimrod R1 reconnaissance aircraft. Northrop Grumman and two other teams, led by Lockheed Martin and L-3 Communications, are competing in the first stage of the program's nine-month assessment phase. The field will be narrowed to two competitors in 2005, when the definition phase begins, and the down-selection to one team will be made in 2006. Acquisition for Project Helix, valued at about $370 million, is to begin in 2007.

Meanwhile, at its Bethpage, N.Y., facility, Northrop Grumman recently tested a communications link that can deliver, in near real-time, mission and survivability data from offboard sensors to crews on board U.S. Navy EA-6B Prowler electronic attack aircraft. The tactical exploitation system (TES), developed by Northrop Grumman's Electronic Systems sector, processed the data during the tests. The data, in the form of "target packages" complete with coordinates, was then sent via a secure communications link from a ground-station node in Baltimore to an EA-6B located at Naval Air Station Whidbey Island, Wash. This was the first demonstration of TES in a tactical jet aircraft, says a Northrop Grumman official. Previous demos of the system have been under sea and on the ground. Northrop Grumman and the Navy plan to flight test TES in a fleet battle experiment this year. The company proposes TES as part of the improved capability (ICAP) III electronic attack system for the Prowler and, later, for the EA-18G. Visit www.northropgrumman.com.

Ukraine, with about 29,240 square miles (731,000 km2) of airspace, has become the 33rd member state of Eurocontrol, according to the Brussels-based air traffic management organization. Ukraine has been active in the European aviation community since December 1999, when it joined the European Civil Aviation Conference (ECAC). Visit www.eurocontrol.int/odt/mtcd.

Lockheed Martin has selected Crane Aerospace & Electronics to provide hermetic proximity switches from its Eldec business segment, for the F-35 Joint Strike Fighter program. The switches, to be initially delivered in late 2004, will be used in the new fighter aircraft's door and utility systems. Visit www.craneaerospace.com.

A communications gateway that will link Eurocontrol's central flow management unit (CFMU) with message handling systems within the agency's member states recently passed its site acceptance test. Testing of the ANg1 system, made by Comsoft GmbH, Karlsruhe, Germany, was conducted at Eurocontrol facilities in Brussels and Bretigny. Visit www.comsoft.de. 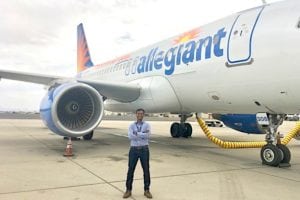