To privatize or not to privatize. Countries such as Canada, New Zealand, Australia and the UK have adopted various levels of privatization for their air traffic control (ATC). The U.S. Federal Aviation Administration (FAA) has not. But there are interest groups that would dearly like to inject nongovernmental stewardship into U.S. ATC.

One group is the Los Angeles-based Reason Foundation, a public think tank that favors privately run organizations over ones that are government run. Because its views tend to parallel those of the Bush administration and many members of Congress, the foundation’s views are to be heeded.

I first learned of the Reason Foundation from a brief submitted by its director of transportation, Robert Poole, to counter the "misinformation circulated by the controllers union," the National Air Traffic Controllers Association (NATCA). The brief targets a white paper titled "Pitfalls of Air Traffic Control Privatization," commissioned by NATCA and compiled by Elliott Sclar, a professor at Columbia University, and the HDR Management Consulting Group, in White Plains, N.Y.

Rather than accept Poole’s assertions at face value, I contacted Ruth Marlin, NATCA’s executive vice president. Naturally, her view was quite the opposite of Poole’s. In point/counterpoint style, here is what was expressed:

Marlin: "If that were true, then the U.S. would have to be corporatized, which it’s not; 50 percent of the world’s air traffic is managed by the FAA." Reason Foundation apparently attained its figures from the Civil Air Navigation Services Organisation (CANSO), which has "modified the definition of corporatized to include the FAA."

Poole: "The U.S. Department of Transportation inspector general noted, in 2000, that the number of operational errors in U.S. air traffic control had increased by 51 percent over five years."

Poole: "The UK, Australia and Canada have all shown cost reductions since reorganizing their systems. In Australia, operating costs are down 26 percent, while handling 157 percent more air traffic. In Canada, Nav Canada user fees are less than the taxes they replaced."

Marlin: "There’s no data to support the claim that privatized ATC is less costly. One problem with ATC that is financed by user fees is that when traffic declines, your cost per air traffic operation goes up, so you have to increase your fees. If the FAA were corporatized, the airlines would have to pay larger fees now, just when they least can afford it."

(In apparent concurrence, a March 18 CANSO release says civil aviation may see a 25 percent decline in air traffic movements because of the Iraqi war. And this "will almost certainly result in significantly higher navigation charges next year...")

Poole: Referring to NATCA’s "mistaken claims that the Bush administration is attempting to privatize air traffic control,...all of the existing proposals for reform involve structural and financial reorganization of the existing system by converting it into a business-like operation either as a separate government corporation or as a separate nonprofit corporation, similar to Nav Canada."

Marlin: "Running the FAA more business-like would not meet the definition of Poole’s previous writings on the topic. Now we get back to the user and funding." ATC is a "public need. Government has to secure an ATC system–which is why NATS [the UK’s National Air Traffic Services] has had three bailouts. You can say whatever you want about a public-need organization, you face the same problems."

Poole: NATCA’s 31-page white paper is "based largely on anecdote and assertion, rather than a serious study based on data and analysis."

Marlin: "We stand by the report. We funded the report, but the findings are those of the researchers. It is substantiated by data, but we didn’t include it all because we wanted a digestable report for the members of Congress."

Two questions could accompany the debate over FAA’s corporatization, or privatization. First, can a corporate model adopted by New Zealand or Canada be successfully suited for an ATC service provider as large as the FAA? And second, while it may succeed when the air transport community is busy and healthy, how would a corporatized FAA survive the current business climate for aviation?

The topic obviously requires sage determination. To learn more about the Reason Foundation, click on www.reason.org, and to read the NATCA-funded white paper, visit www.natca.org. 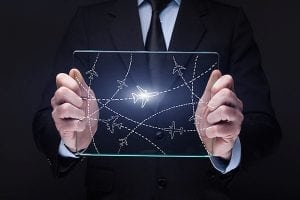