Words to Live By

I enjoyed your October Avionics System Design column titled "Saving the Pilot: Part I." I manage a small aircraft transportation laboratory, funded by NASA Langley. The Maryland Advanced Development Lab has partnered with several entities to form the Maryland Mid-Atlantic SATS Lab (MMSL). We are developing the process and technology needed to accomplish three basic capabilities.

Although all three of these capabilities can apply to Mr. Shawlee’s logic, the highlighted phrase on page 44 ["Future systems should query or advise pilots…to help make choices easily"] has a very direct application to capability No. 3. MMSL is developing a cockpit associate designed to function as an "electronic copilot." That may be a buzzword overstated by many avionics developers. In our case, we are using a knowledge-based system (versus rules-based software) to predict/anticipate pilot needs, as well as inform the pilot of current critical and non-critical task options. Our goal is your quoted phrase: "to query and advise" the pilot.

MMSL is trying to consider the occasional pilot, as well as the more proficient pilot, under IFR conditions. Workload reduction, decision aiding, alerting, conflict resolution are all part of our design goal.

Specific to the cockpit associate, MMSL members–the Maryland Advanced Development Lab, ASI, ARINC and UPS Aviation Technologies–are attempting to provide on-board IFR sequencing and the separation logic needed to enter these small airfields. This minimizes the air traffic control workload, while allowing for instrument approaches, using combined vision systems that blend synthetic vision (highway in the sky), stored and processed imagery, and enhanced vision (infrared camera) to create a visible scene of the runway environment in IFR conditions. The cockpit associate would provide the pilot with aircraft configuration comments such as: "Recommend slowing to 125 knots. You are approaching the field well above gear speed."

Essentially we have looked at the responsibilities that a good copilot would handle and tried to recreate them electronically, using a knowledge-based system developed by ASI. The cockpit associate, we hope, will provide both the predictive and reactive assistance needed not only to incorporate our new technologies, but also to simplify items such as the monitoring of fuel indicator failures.

As a former F-4 and F-18 pilot, I have had the pleasure of performing aviation tasks with naval flight officers. There is much to be said for the simple comment, "What are you doing?" while in-flight. That can happen with an individual or a computer system. The nice thing about the computer is the sarcasm can be filtered out.

We Missed A Few

Looking at your Aerospace Acronym, Intialism and Abbreviation Guide in the December issue (page 27), I found you are missing some common acronyms. For example:

I’m sure you will get some other suggestions for other acronyms, but these are commonly used ones in the Navy.

I agree with the comments in the Avionics System Design column (October 2002, page 43). Though not a commercial airline pilot, but only a private pilot who rents a Warrior II two to three times a month, I try to reduce the murk factor whenever possible. I’ve become adept at running through the expected frequency changes on my nav/com as part of my preflight and figuring out the operation of new stuff in the panel.

As for fuel gauges, I don’t trust them. I check my tanks and run fuel calculations for each flight. 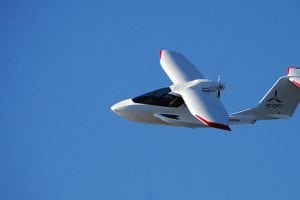