They were just 50 feet above the runway at Mirabel, Quebec, within seconds of touching down for an emergency landing, when the left wing separated. It had literally been burned off from an intense conflagration that originated in the wheel well.

The two pilots and nine passengers aboard the Fairchild-Swearingen Metroliner II twin turboprop were killed when the fuselage careened some 90 degrees to the axis of flight and hit the ground nearly inverted. Blunt trauma, fire and toxic smoke did their deadly work.

The flight had gone badly from the beginning. The pilots and passengers also paid the price of a known fire hazard that had gone uncorrected for years, according to the Transportation Safety Board (TSB) of Canada. The crash occurred June 18, 1998, but the TSB’s final report was published only recently.

Briefly, on the 4,000-foot (1,220-meter) takeoff run from nearby Dorval, Quebec, the brakes were dragging on the left main gear. The crew noticed that the airplane pulled to the left, and they applied right rudder to maintain alignment with the centerline. As a measure of the brakes’ resistance, the takeoff roll was twice as long as calculated.

Within two minutes, the crew experienced control problems, an hydraulic failure warning, problems with the left engine, and a left wing overheat light.

Unknown to the pilots, a fire was raging in the left wheel well. According to the TSB report: "During the takeoff roll, the heat generated by the two dragging brakes increased exponentially. As a result, a brake seal failed, allowing brake fluid to leak onto the hot brake components and ignite, causing a fire in the wheel well."

As a measure of the fire’s intensity, the discoloration of the brake discs recovered at the scene of the crash showed they had been exposed to temperatures exceeding 600 degrees C (1,112 degrees F). The crash of the Metro II, operating as Propair Flight 420, further highlights the danger of fires in inaccessible areas of the aircraft, such as the aft belly hold fire in an Air Canada Boeing 767 discussed last month.

From the Propair crash, the TSB raised a host of issues, including design deficiencies and inadequate fire warnings. To cite from the TSB report:

"The TSB did extensive research and found that, since 1983, landing gear failures, tire failures, flat tires and loss of control on [the] ground were frequent for SA226s and SA227s [two models of the Metroliner]. Sixty-five of these occurrences involved circumstances similar to this accident and had the potential to result in tragic events."

How did the Flight 420 crew come to attempt takeoff with dragging brakes? The short answer is that "OFF" does not mean fully off. The TSB highlighted this caution from a 1993 issue of the manufacturer’s newsletter: "Before taxiing or beginning the takeoff roll, ensure that the parking brake is fully released [by applying pressure to the brake pedals]. Just moving the parking brake control knob to the ‘OFF’ position is not enough to ensure release of the brakes…since some residual pressure can remain even with the knob in the ‘OFF’ position."

The TSB noted with mild understatement, "For the above reasons, Metro II crews tend to not trust the parking brake." A more acerbic source described the parking brake situation as a "glaring design deficiency." The incident history would seem to support this judgment.

The TSB reserved its greatest concern for the cockpit warning in the event of a fire in the main landing gear wheel well. At the same time the crew was dealing with the engine and flight control problems, the left wing overheat warning (L WING OVHT) illuminated. But what did it mean? Within some 30 seconds, the light went out. "Not because the overheating problem was corrected," the TSB noted, "but because the fire in the wheel well destroyed the warning system electrical circuit."

As it turns out, there also is a difference between a steady light and a flashing light (see box, this page). According to the emergency checklist:

The crew has to be cognizant of the not-so-subtle difference between a steady and a blinking warning light. If the light stays lit, there is an overheating situation in the wheel well. The flashing of the same warning light signifies overheating of the wire harness routed in the wing leading edge. The crew that doesn’t know (or recollect) this distinction could be clueless. Here is the telling part, from the TSB report:

"The instructions in the AFM [airplane flight manual] offered no other significant indications, such as the possibility of a fire in a wheel well. The pilots receive no ground training for fires in the engine nacelle, since the AFM does not mention this possibility. Operators of this aircraft type…were generally not aware that several overheating incidents and nacelle fires have occurred."

As the expression goes, ignorance can kill. In the face of all this apparent confusion for a flight crew, the TSB concluded that a brake pressure warning system indicator is "absolutely necessary" for each main wheel brake system. The manufacturer indicated to the TSB that a cockpit indicator of brake pressure for each wheel system is feasible. Indeed, many of these aircraft already are so equipped.

The TSB went a step further. It expressed its hope that, in addition to a brake fluid pressure sensor, a brake disc temperature sensor would be considered. Although more complicated to retrofit, this option would be preferable. A dual-indicating brake disc temperature dial would allow a direct comparison between left and right main landing gear and would disclose a dragging brake much sooner than a brake fluid pressure warning. The justification is as follows: brake pressure gauges are usually "twinned," so that brakes ON/OFF will show at a glance that both brakes are smoothly peaking under symmetric toepressure, and simultaneously (and vitally) showing the release of all pressures. Placing brake temperature gauges alongside would provide for direct, easier comparison (superimposed needles or digital, numeric indicators are not so readily apparent).

One might take yet another step. An infrared closed circuit television (IR CCTV) system, allowing the pilots a direct view of inaccessible places in the aircraft (wheel wells, tailcone, etc.), would provide pilots with a direct view of a possible fire. In this case, if the CCTV showed the landing gear on fire, the crew would be warned to lower the main gear pronto, even though this action is not called for in the event of a flashing light.

A more fundamental issue of warning system design lurks in this case. The difference between a flashing and a continuous warning light ought not to indicate the potential failure of two or more systems (if flashing, turn off generator; if steady, extend landing gear), but rather a degree of urgency in the failure of one system. A steady light should alert the crew; a flashing light should fairly scream for the same sequence of corrective actions. A crisis is no time to be clueless.

Two temperature sensors exist in the overheat alarm circuit for each wing: one in the upper outer part of the wheel well near the air intake duct, the other on the alternator wiring harness in the inboard wing leading edge. If overheating is detected in the wheel well, the L WING OVHT or R WING OVHT light on the warning light panel will light up and stay lit. If overheating is detected in the leading edge wiring harness, the same warning light will flash. 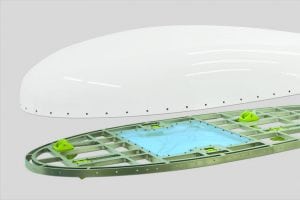