We in the aviation industry know of ARINC standards but may not know how they are developed and what their significance is. We can learn more about these areas, however, by understanding the Airlines Electronic Engineering Committee (AEEC), which develops ARINC standards. AEEC has been developing standards since its inception in 1949, 20 years after ARINC was established.

Taking a closer look at the AEEC is appropriate now. The organization is about to hold its annual general session in Orlando, Fla., Oct. 14-17. And AEEC has a new chairman, Roy Oishi. Recently named an ARINC fellow, Oishi has held leadership positions in ICAO, RTCA and the Institute of Electrical and Electronic Engineers (IEEE), as well as in ARINC. He took a leading role in developing the Abbreviated Test Language for All Systems (ATLAS), a software language for test equipment. He is a regular lecturer in University of California-Los Angeles (UCLA) extension courses, sharing his knowledge of telecommunications, especially as it applies to aviation.

At ARINC headquarters, Avionics Magazine interviewed Oishi. We began with the very basic question, what is AEEC?

Oishi: It’s an international body of major airline operators and other airspace users who lead the development of technical standards for avionics architecture and specifications for form, fit, function and interfaces. Avionics installed in more than 10,000 aircraft around the world are based on these ARINC standards. More than 5,000 engineers and scientists representing nearly 500 organizations participate in the AEEC standard setting process.

AEEC activities are managed and financed independently of other ARINC business units. The committee was founded in 1949, but its history dates back to the ARINC Aircraft Radio Committee established in 1946. Since that time, hundreds of ARINC standards have been written and published. Currently, 167 are considered active and are offered for sale.

Avionics Magazine: Can you elaborate on ARINC standards?

Oishi: Yes, there are three classes of standards. There are ARINC characteristics, which define the avionics equipment’s form, fit, function and interfaces. These are divided into two series, the ARINC 700 series for digital avionics and the 500 series for analog avionics. Then there are ARINC specifications, which are principally used to define either the physical packaging or mounting of avionics equipment or data communications standards or a high-level computer language. And finally, we have ARINC reports, which provide guidelines or general information that the airlines find to be good practices, often related to avionics maintenance and support.

Avionics Magazine: How do ARINC standards relate to other aviation standards?

Oishi: You’re referring, of course, to ICAO, RTCA and Eurocae [European Organization for Civil Aviation Electronics]. ICAO develops the standards and recommended practices, or SARPs, which provide high-level technical guidance to advance international aviation. RTCA is a federal advisory committee; it develops documents that may be used by the FAA in their advisory circulars, technical standard orders and other regulatory functions. Eurocae performs a similar function for European regulators. Both RTCA and Eurocae develop minimum operational performance and minimum aviation system performance standards [MOPS and MASPS].

SARPs, MOPS and MASPS are functional or performance-based and do not include the detailed equipment characteristics necessary to develop and install a particular avionics box in an airplane. ARINC characteristics and specifications are the standards that meet that need.

Avionics Magazine: Do you sometimes work with the other organizations?

Oishi: Yes. Even though our areas of responsibility are quite different, we sometimes coordinate efforts to make sure a particular technology is implemented effectively. An example is the work being done to introduce VDL [VHF data link] Mode 2 or ATC [air traffic control] data link.

Avionics Magazine: What are the benefits of ARINC standards?

Oishi: There are substantial benefits to airlines, as the standards promote competition, provide interchangeability and standardize maintenance procedures. They also provide a starting point for avionics development and allow aircraft manufacturers to pre-wire aircraft to ensure that cost-effective avionics and new installations are compatible.

Georgia State University’s Aviation Policy Research, Aviation and Transport Studies conducted a study called "The Economic Impact of Avionics Standardization on the Airline Industry." It estimates that the airlines save more than $291 million annually from the use of ARINC standards.

Avionics Magazine: What is ARINC’s role in AEEC’s standards development?

Oishi: The ARINC board of directors has defined the AEEC terms of reference, which describe how the AEEC will operate. These terms explicitly state that ARINC standards must be developed using an open, consensus-based process. The aviation community must be given the opportunity to comment upon proposed or adopted standards.

Also, AEEC must, according to the terms of reference, "give preference to technical and performance criteria, measurable by examination or testing, in technical characteristic development, where such criteria may reasonably be used in lieu of design, materials or construction criteria."

In consultation with the AEEC members, ARINC also names the AEEC officers–the chairman, vice chairman and secretary–all of whom are non-voting. And it provides staff support for the standards’ development and publication.

Avionics Magazine: What is the importance of the annual AEEC general session?

Oishi: The general session is the culmination of the standards development work, and it initiates next year’s program. It’s an ideal opportunity for aviation industry professionals to obtain an overview of the important technical developments in air transport avionics and other aircraft electronics.

The standards development work prepares a mature draft for adoption by AEEC, and while the adoption can be done by mail or e-mail, the mature draft normally is presented during the general session. Industry is invited to participate in the general session. They’ll be seated theater-style around the AEEC members. What they will see is that when a subcommittee proposes a mature draft for adoption, the AEEC members are polled and results are immediately known. Advocates for, and occasionally against, adoption are usually presented.

Avionics Magazine: And the determination of the following year’s program?

Oishi: This year a new process for proposing new standards development tasks has been instituted. A project initiation/modification request has been defined, and it summarizes the information needed for the AEEC to make a judgment of the value to the airlines of committing the resources to each task. So if a project is determined to be in the airlines’ interest, it will receive a priority and be assigned to a subcommittee for action.

The general session also reviews the work accomplished the previous year, including the adoption of any standards that the industry determines are mature. AEEC votes on each proposed adoption, and a notice of adoption will be issued to the industry, along with a request for any objections to its publication.

Avionics Magazine: So standards for cabin systems also are addressed?

Oishi: Standards regarding video and audio are not being addressed, but as to the infrastructure of having a network, server and equipment at each seat, yes, we are involved with standards in that area. That equipment often changes quicker than the equipment in the cockpit, and having standards gives the airlines the freedom to update equipment without having to rebuild the seat.

Avionics Magazine: Your general sessions in the fall were canceled last year because of 9/11. Did 9/11 affect AEEC in other ways?

Oishi: The biggest result for our work program is the scrutiny our airline members are giving to the process. After 9/11 the members became painfully aware of the limitation of the resources to support meetings and work on standards development. The airlines and engineering departments have lost staff, and there’s stringent control on travel. So considerable scrutiny is being placed on the value of the work, what it will produce, and what the value will be to the airlines.

Avionics Magazine: The Georgia State study, conducted in 2000, indicates that the airlines were scrutinizing standards development prior to 9/11.

Oishi: Clearly they were. In the age of cost/benefit and return on investment, it’s important to quantify results. One of the things I plan to do is go back to Georgia State and look into an annual update [of the study] and continue this quantification.

Avionics Magazine: How does industry participate in the AEEC work program?

Oishi: Both the process of work program development and the development of the standards themselves are open to the industry. ARINC standards typically are developed in the meetings of the AEEC subcommittees and working groups. An announcement of each meeting is prepared about a month in advance. Interested parties will receive the meeting’s date, time, location and agenda by e-mail, but you can also find the information on the AEEC Web page. All interested parties can participate in the meetings, and all actions are taken by a consensus of the participants.

An airline employee who serves as chairman normally leads an AEEC subcommittee or working group, and an Industry Activities staff person serves as secretary. Meeting reports are sent to the same constituency and posted on the ARINC Web site [www.arinc.com/industry_activities/]. So, really, any interested person can participate in the process.

Avionics Magazine: Does your membership include the U.S. military?

Oishi: Yes. For example, the Air Force is a member. Because of GATM [Global Air Traffic Management], there’s a lot of U.S. military interest in commercial standards.

Avionics Magazine: How do you see AEEC’s future and your activities as chairman?

Oishi: I would see AEEC evolve to set the standards for the next generation of equipment, whether it is software-intensive, integrated across the aircraft or networked.

One problem is that avionics boxes need to communicate with a wider range of peers. How AEEC standards will relate to this environment is not clear, but I believe we have a role to play in providing such standardization even though the classic form, fit and function may not be the appropriate approach in the future. 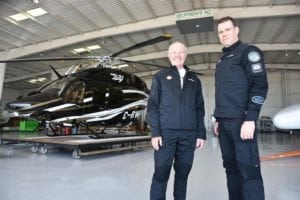 Helicopter Circling the Globe Will Have Honeywell, Inmarsat Wi-Fi