Few pilots, when preparing for a flight from, say, the west coast to the east coast with a brief overnight stop midway, would overlook testing their radios for full and correct operation as part of their pre-departure checks. Yet there was one pilot who did exactly the opposite. In the interest of fuel economy, he removed his only radio before setting out on an extended shakedown flight test from San Diego to St. Louis and then on to New York, and chose not to reinstall it for his record-setting flight to Paris several days later. But that was in 1927, and the pilot’s name was, of course, Charles Lindbergh.

Lindbergh’s flying career ended shortly after World War II, and he died in 1974, so we can only imagine how he would regard the clamor on today’s voice radio channels, both across the United States and around the world. Because today, in virtually every heavier-than-air machine except hang gliders and certain ultra lights, radio equipment has become almost as essential as fuel, and gate-to-gate communication has become aviation’s universal standard.

Just as "see and be seen" is the watchword of visual flight, so "hear and be heard" has become the rule governing essentially all flight operations, from engine start prior to departure to shutdown on the ramp at one’s destination. And, while new technology has slightly reduced two-way voice traffic through such things as the automated terminal information system (ATIS), and promises even further reductions via controller pilot data link communications (CPDLC), we will probably never again experience the absolute radio silence enjoyed by Lindbergh and others in those early years.

Which is, of course, just as well since today’s crowded airport surfaces, terminal areas and en-route airspace would become incredibly dangerous places without frequent radio exchanges between pilots and the thousands of controllers responsible for safety in all the many, very different traffic regimes. Other pilots monitoring these exchanges on the same radio frequency also gain valuable "situational awareness" knowledge regarding the location and intentions of other aircraft in their vicinity. But this, in turn, underlines the "catch 22" aspect of new systems, such as CPDLC, which have been developed partly to reduce radio congestion, but where the controller’s instructions will be directed solely at specific aircraft and be unheard by others.

Nevertheless, it is clear that the controller pilot data links will become an increasingly important technology for aviation. Indeed, for the past several years, they have become virtually standard for airlines flying on trans-Pacific routes, far beyond VHF communications range. Previously, such flights were forced to rely on will-’o-the-wisp, high-frequency voice transmissions, which were very unpredictable and could take many minutes to complete.

The introduction of airborne satellite communications equipment in the late 1980s and early 1990s ushered in the future air navigation system (FANS) concept, which provided instantaneous, VHF-quality data link signals. FANS is a very successful concept in use today over the Pacific. However, due to the inevitability of technical progress, its data formats are not compatible with those selected for CPDLC use, in conjunction with the new aeronautical telecommunications network (ATN), which has been internationally adopted as the coming "Internet of the sky." Extensive tests by Eurocontrol, and subsequently, by the Federal Aviation Administration (FAA), have proven the value of the CPDLC/ATN combination.

Beyond these certified technologies are other concepts that may eventually find their way into the future air/ground communications arena. Already certain cell phone equipment has been approved for private, but not ATC, onboard use. And there are investigations under way into the potential of computer-based wireless communications systems.

Proponents of ultra-wideband technology, although recently limited by the U.S. Federal Communications Commission (FCC) to very localized and low-power terrestrial applications, are undoubtedly looking at future aviation applications. As in all things, and particularly in avionics, one should never say never.

But for the immediate future, VHF voice transmissions remain the primary communications medium for aviation in North America and most of the rest of the world. Consequently, whether an individual aircraft flying on an instrument flight plan is a small, single-engine machine or a massive, multi-engine widebody, the format and content of their voice radio exchanges with controllers, and the radio frequencies which they use, remain essentially the same. So for readers who are neither pilots nor controllers, a broad description of how the system operates today may be useful.

Prior to departure, flight plans are filed in advance with air traffic control (ATC) either by individual pilots or an airline’s dispatcher, or in the case of some corporate operators, a private flight service company. At departure time, each pilot will have obtained the local airport weather, runway and other information from the ATIS, either by voice or, in newer aircraft, via the digital ATIS (DATIS), the data from which is then either shown on the display screen of the flight management system (FMS) or presented as a paper copy by a printer on the flight deck.

Actual departure is preceded by clearance delivery, where ATC advises approval of the filed plan, sometimes with route, altitude or other amendments, and also provides the ATC transponder "squawk" code assignment for the flight. Private operators obtain this by calling the local FAA clearance delivery VHF voice channel, while airlines and some corporate aircraft will receive their FAA flight plan clearances–as they would the earlier DATIS information–via the airborne communications addressing and reporting system (ACARS), a private subscriber data link available over many dedicated VHF stations across the United States and around the world. The ACARS service is provided by two separate, private organizations: ARINC, owned by a consortium of U.S. and international air carriers, and the French Societe Internationale de Telecommunications Aeronautiques (SITA), owned by a European consortium. Both compete with each other for subscribers for their essentially identical services.

Taxi clearance is the next exchange, obtained by private aircraft through a direct VHF voice request on the airport’s ground control frequency. Airlines with few movements at an airport also will call direct, but at larger hubs, an airline will normally have its own ramp control VHF voice channel to coordinate movements around its gate areas before passing aircraft over to ground control. At this point, all aircraft will have entered the airport’s surface movement area, and ground control will have given each of them very specific taxi route instructions to reach the active runway from their individual locations. From here on, too, virtually all future ATC communications until engine shutdown at destination will be by voice over specified VHF channels.

On reaching the runway holding position, each aircraft will switch to the airport control tower VHF frequency to request takeoff clearance. When this is received from the tower, it usually will include the instruction to call the local departure control VHF frequency after takeoff.

Depending on the airport’s location, traffic density and other factors, the departure control function will be staffed by a position in the air route traffic control center (ARTCC) or, should the departure airport be a major hub, it will be a component of the airport’s terminal radar approach control (TRACON) facility, which controls departing and arriving traffic within about a 30-mile radius. When the departing aircraft reaches this boundary, or reaches its initial climb altitude–typically 5,000 feet–the TRACON controller will normally direct the aircraft to contact the ARTCC for further clearance.

In all these VHF voice exchanges, the controller’s instructions will be brief but explicit. For example, the instruction to transfer communications to another facility would be "Cessna 1234, contact Departure 134.21," the latter being the VHF frequency for departure control. Brevity is essential: in today’s crowded skies there is no time for lengthy conversations, and terms like "over" and "out" have long since disappeared.

While most pilots are equally disciplined in this aspect, there are still many who feel that a transmission is incomplete without the use of long "aaahs" between words. This is the bane of controllers in high-density airspace, and it’s discourteous, since it unnecessarily occupies busy frequencies while other pilots are waiting to call in or the controller is waiting to call out.

Once communications have been established with the ARTCC, there is little further need for the pilot to communicate with the controller, other than to request flight plan changes due to changing weather or similar reasons. The center controller now monitors the aircraft’s progress against its flight plan by its transponder returns on his radar screen and, for most general aviation pilots, the skies will become much quieter. On airline flight decks, however, messages still flow back and forth over the dedicated ACARS VHF frequencies, as crews communicate with their company dispatchers about flight progress, fuel requirements on turnaround at the destination, and other technical issues, such as perhaps a need to have a ground technician ready to troubleshoot a minor problem which has arisen en route.

As the aircraft approaches its destination, the pilot will have checked the latest ATIS or DATIS information, and the ARTCC controller will instruct him to contact approach control for arrival instructions. From this point onwards, the process becomes a replay of the departure procedure, except in reverse, as the aircraft is progressively handed over from the center to the TRACON, then to the tower control for landing, then to ground control once he has landed and cleared the runway, and finally to the airline ramp control or, in the case of a general aviation airplane, to the appropriate fixed base operator (FBO).

On almost all occasions, the whole process today is a smooth, well coordinated activity, interrupted only by severe weather and, much more rarely, by aircraft or airport operational problems. Viewed against the volume of air traffic today–which has only slightly declined since Sept. 11 and is now recovering rapidly–the process is simply remarkable, and the U.S. system is unequaled in any other part of the world.

But without radio communications, it could not possibly exist. If he were still with us, Lindbergh–reportedly a stickler for organization and careful planning–would certainly have that radio reinstalled before he took to the air once more. 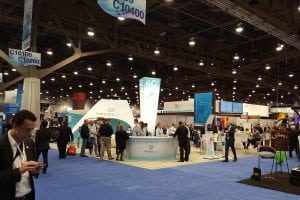