Dassault Aviation’s "EASy cockpit," destined for the redesigned Falcon 900EX, the Falcon 2000EX and the Falcon 7X, embodies fundamental changes in the avionics interface. The leading concept behind the new flight deck is safety–improving situational awareness and reducing pilot workload, while keeping the pilot in the loop–by making the interface more intuitive and easy to use.

Entering the world of EASy after flying in older glass cockpits will be like moving from the DOS operating system to the graphical Windows interface–complete with point-and-click cursors and pull-down menus–Dassault officials say. (The onboard displays operate under Honeywell’s aviation-specific Digital Engine Operating System [DEOS].)

With EASy, Dassault and Honeywell "have been able to develop something that matches perfectly what Dassault wanted to do–to simplify the operation of the avionics in the cockpit in order to increase the safety of flight," says Jean-Francois Chanut, Honeywell’s director of sales and support for Dassault programs.

After six years of planning and development, EASy technology is closing on its first target, the redesigned 900EX bizjet, equipped with new avionics and redesigned brake, pressurization, fuel and air brake systems. Dassault scheduled the aircraft’s first EASy flight in January 2002 and plans to secure certification by the Federal Aviation Administration (FAA) and the European Joint Aviation Authorities (JAA) in the second half of 2002. Deliveries are to commence in 2003. Falcon 2000EXs will be equipped with EASy, starting in 2004. As of mid-December 2001, Dassault had received orders for 98 EASy airplanes, the bulk of which were 2000EXs.

"You need a way to differentiate yourself from the pack. It’s even better when the differentiator is safety–workload, situational awareness and better communications." Nevertheless there is only a 1 percent price premium on the Falcon 900EX EASy over the F900EX that it replaces, Foley adds.

While the hardware design is frozen, software changes will be made if necessary, as flight tests of the EASy cockpit proceed. Track ball controller sensitivities, for example, could be adjusted, says Jerry Tritt, chief pilot technical for Dassault Falcon Jet.

Four 14.1-inch diagonal, roughly 13-by-10-inch liquid crystal displays dominate the EASy cockpit instrument panel. Each "tube" can be divided into five window sizes, either three-thirds, two-thirds, one-half, one-third or one-sixth of the big screen. Except for the attitude director indicator (ADI) portion of the primary display units (PDUs)–positioned directly in front of the pilot flying (PF) and the pilot not flying (PNF)–the windows are configurable via drop-down menus to display various navigation, performance and synoptic information. The screens are arranged in a "T," with the center two multifunction display units (MDUs) stacked vertically to occupy a shared work area for easy visibility and access by both pilots.

"The controls are centered on the pedestal, overhead panel and the flight guidance panel located in the center of the glare shield, so that all controls can be reached by either pilot," says Rich Iudice, director of flight operations for Dassault Falcon Jet. "We don’t have any controls located on the side panels."

Although the cockpit is based on Honeywell’s Primus Epic hardware and displays, EASy’s presentation was designed collaboratively by Dassault and Honeywell pilots and engineers, guided by Dassault’s philosophy of providing commonality between all new-generation Falcons.

"What is unique about EASy is that the default flight mode uses the flight path symbol, as opposed to pitch and roll," Chanut says. "More and more, Dassault thinks that the pilot needs to understand where the aircraft is going rather than where it’s pointing to. The nose may be pointing up, but the aircraft may be going downward."

Reflecting Dassault’s military experience with the Rafale fighter, the horizon display focuses on a flight path symbol–a green-colored, horizontal bar with a circle at its midpoint–rather than attitude. (The attitude icons are placed farther out from the center.) Also in the center of the artificial horizon display is a magenta-colored circle, representing the flight director, the guidance commands from the flight management system (FMS) required to follow the flight path. Dassault engineers feel this presentation is more intuitive, accurate and precise than current layouts, Iudice says.

"It’s basically flying a circle in a circle," he says. "You maneuver the aircraft to position the flight path symbol over and concentric with the guidance cue, which directs the energy of the airplane to the selected lateral and vertical modes." The system "helps pilots maintain manual control when hand-flying or monitor autopilot control by directly seeing where the airplane’s energy is taking it, in relation to where he or she is commanding it to go," Iudice adds. "The ‘middleman,’ attitude, is taken out of the equation."

The horizon display arrangement is more intuitive, Chanut agrees. "If [the flight path symbol] is on the horizon, you’re flying level–toward the horizon–and maintaining altitude." If the symbol is above the horizon, the aircraft is climbing; if it’s below, the aircraft is descending. According to Dassault’s Tritt, "It’s more difficult to maintain altitude with the traditional pitch-based ADI."

EASy designers considered several control devices, including a touch pad and a movable computer mouse. But a cursor control device (CCD)–a track ball controller seated in a rugged palm rest (two per cockpit)–was selected as the most reliable control device in moderate to severe turbulence. Dassault provides additional controllers, including a multifunction keyboard (MKB), dedicated communications and barometric rotary knobs on the glare shield panel, and multifunction rotary knobs on the CCD. Nevertheless, the number of dedicated controls has been reduced by half, compared with the current 900EX cockpit.

Dassault also makes it clear where the cursor is. When the cross-hair indicator is moved to a new position, it is briefly illuminated in a defined circle–the "blossom." Both CCDs are located on the center pedestal, to enhance "cockpit resource management," the interaction between the PF and the PNF.

Two main color pairs exist in the EASy cockpit, magenta/cyan and green/cyan. In the flight director, navigation and autopilot modes, the magenta/cyan pair distinguishes between what the system is doing now and what it could do next with an "armed target." A localizer the aircraft is armed to capture on approach is coded cyan or blue. What the aircraft is actually flying–such as altitude, course, airspeed and flight director commands–is coded magenta unless the aircraft is in automatic flight control system (ACFS) heading mode, when the color is white (no active target). Most manually entered, standby data is shown in cyan or blue. "You know by looking at [the color codes] exactly what the aircraft is doing now and exactly what it’s going to do," Iudice claims.

The emphasis on ease of use is evident in the INAV display. EASy tries to simplify the task of changing flight plans to reflect air traffic control directives. A pilot can change the flight plan en route by positioning the cursor on the flight path indicator and pulling the "rubber band" line out to a different point on the moving map. Clicking the cursor inserts additional waypoints: the system automatically recalculates time, fuel and distance. Flight plan changes also can be added through the waypoint list, located in a vertical window outboard of the nav window, or in the MKB control window. In addition, the pilot can view the new flight path and see its implications graphically in both horizontal and vertical planes before any changes are locked in.

EASy also strives to make initial flight planning intuitive. To plan each phase of flight, pilots click on icons representing the aircraft stationary, climbing, cruising or descending. According to Dassault, planning requires little manual data entry because information on airports, airways, navaids, obstacles, radio frequencies and other categories has been pre-stored in a worldwide database.

"EASy is the only cockpit that does not use a control display unit [CDU] or multifunction control display unit [MCDU] to interface with the flight management system," Honeywell’s Chanut says. (CDUs and MCDUs–through which data typically is sent to, or received from the FMS–are state of the art in most commercial airplanes.) "The idea for Dassault was to force pilots not to look down [at the small CDU display], but to look at the big screens or out the window," Chanut adds. "Rather than going to one place to program a change and elsewhere to see the results, it is done in one place."

EASy’s FMSs are accessed through the CCD and multifunction keyboard, Iudice explains. Pilots won’t have to cycle through 30 or more pages of information for certain functions on a roughly 4-inch diagonal screen or know the exact button pushes to get the information they want, he says. EASy displays show much more information all of the time, says Iudice, and more data can be accessed via drop-down menus. "All functions that are typically used through the CDU now are more easily accessible graphically," Chanut adds.

Pilots can select a wide range of data on the nav display, including airports, weather radar, and terrain awareness warning system (TAWS) and TCAS advisories. Clicking on an individual waypoint activates a menu with choices, such as "amend route," "hold" and "divert after." North-up or heading-up can be selected even with radar. Terrain is color-coded according to the degree of risk it poses to the aircraft–red for danger, yellow for warning. Nav display information includes basic geography–mountains, rivers, cities–as well as latitude/longitude grid, political borders (with maritime zones), airports, navaids, airways, airspace boundaries, flight plan, aircraft position and lightning sensors.

Electronic check lists also are a prominent ease-of-use feature. As the pilot goes through an item on a particular list and performs the required action, sensors detect the activity. Meanwhile, the intelligent menu management system automatically checks the item off, changes the item’s color on the display from blue to green, and opens the next item. Each check list item calls up a synoptic display, showing real-time system status. 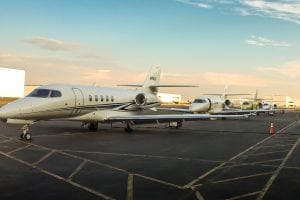 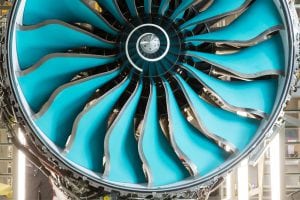 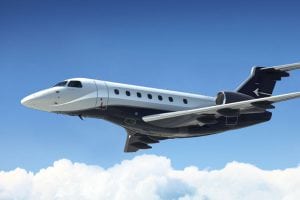