The tragic terrorist attack on Sept. 11 of the World Trade Center and the Pentagon delivered a body blow to civil aviation. U.S. airlines have lost millions of dollars in revenue, and although the U.S. government will provide a multibillion-dollar relief package, the carriers, which were confronting an economic downturn prior to Sept. 11, still must confront the huge expense of building up operational security and face a public that will be slow to embrace air travel again.

And the initial blow to the civil aviation industry has produced other consequences–a ripple effect. Boeing, the United States’ largest exporter, announced it might reduce its work force by 30,000. This undoubtedly will cause further ripples, based on the premise that each Boeing job creates three other jobs. When Boeing suffers, many vendors suffer, too.

One industry analyst predicts the total reduction next year in large airliner production will be 140 aircraft. Figure an average of $6 million per aircraft for the installation of electronics, and you realize a possible $840-million hit to the avionics industry from the air transport sector.

What other consequences could emerge? Could Free Flight be placed on an indefinite hold? After all, with air congestion not currently an issue, the idea of large aircraft (which now can become guided missiles) flying outside a tightly controlled route structure may have lost its appeal.

However, Free Flight proponents could well argue that the concept, which is meant to improve the efficiency of the National Airspace System through shared data and collaborative decision making, in no way denotes unmonitored airspace. Presumably…hopefully…that efficiency may be needed again soon. James Coyne, president of the National Air Transportation Association (NATA), believes the airline industry will recover faster than most people would expect. He predicts capacity will reach 90 percent of the pre-Sept. 11 level in just six months.

Individuals close to the Federal Aviation Administration’s (FAA’s) Free Flight program have told me the agency plans to proceed with Free Flight initiatives. But they also acknowledged that the program’s progress could be constrained if funding is diverted to new security initiatives.

Automatic Dependent Surveillance-Broadcast (ADS-B), a technology that allows aircraft to broadcast their real-time position to other aircraft and ground control, also has its proponents. Indeed, in a speech he gave Sept. 25 at the Aero Club in Washington, D.C., FedEx Corp. Chairman Frederick Smith advocated ADS-B as part of "a positive control ATC system" that will improve air travel security (see page 12). Smith listed 10 steps "to ensure the safety of our skies." One suggested step that shows merit would require all aircraft (except perhaps ultralights) flown in the United States "to be equipped with a primary and secondary transponder," the latter of which cannot be "cut off from the cockpit."

Whether or until that happens, plans to eliminate long-range primary radar, which monitors aircraft en route, no doubt will be on indefinite hold. Appealing as the elimination of these costly-to-maintain systems may be, their value in monitoring aircraft that have their transponders disengaged (which is what the terrorists did on Sept. 11) has been affirmed.

Might the ripple effect of Sept. 11 impact the Global Positioning System (GPS)? GPS’ vulnerabilities, both intentional and unintentional, have long been an issue in the civil aviation community. On the day prior to the terrorist attacks, the Volpe Center released the final report on its GPS vulnerability assessment. (Look for our coverage of the report in an upcoming issue of Avionics Magazine.) Regarding intentional disruption of the GPS signal, the report says, "Some jamming devices/techniques are available on the Internet, and proliferation will continue because a single device that could disrupt military and civil operations worldwide would be attractive to malicious governments and groups."

Technologies designed to improve air travel security are bound to gain industry’s favor now. Many suggestions are proposed. Our "Avionics System Design" columnist, Walter Shawlee 2, suggests both visual and audio monitoring of the cabin area by the flight crew. This would involve installing video cameras and a microphone in the cabin and adding a second audio channel to the cockpit voice recorder. Walter further suggests a link that would transmit cockpit and cabin audio to the ground in real time, using an emergency channel like 121.5 Mhz.

Read our "Safety in Avionics" column on page 57. Columnist David Evans reports on another security scheme, the "RoboLander," which would transfer control of an airplane seized by terrorists to ground personnel. It sounds radical, but a Boeing official claims the company’s Connexion integrated communications package, designed to provide high-speed e-mail and Internet access in airliners, could incorporate a RoboLander-type system.

Beyond electronic security devices, the avionics industry will probably find smoother financial waters in the military market, where aging aircraft entering combat require immediate upgrades and a steady supply of replaceable items. The industry may also benefit from a bustling corporate aircraft market. According to the business magazine, Forbes, despite an economic slowdown, the desire among companies to transport their executives and employees safely has never been greater. Meanwhile, we can only guess how many more ripples will result from the tragic Tuesday in September. 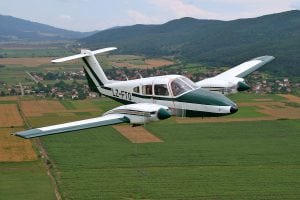 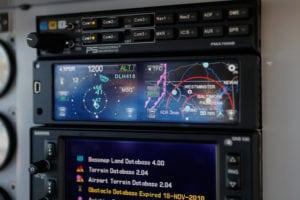 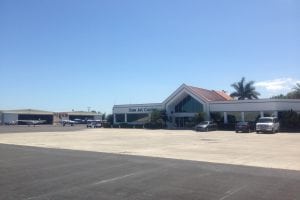