Fractional Ownership NPRM
The Federal Aviation Administration (FAA) published on July 18 a Notice of Proposed Rulemaking (NPRM) that defines new regulations covering the fractional ownership of aircraft, a shared proprietorship concept that has brought a boom to the executive air-transportation market. Based on recommendations by the FAA-appointed Fractional Ownership Aviation Rulemaking Committee, the NPRM would establish a new Subpart K of FAR Part 91. It largely follows FAR Part 121 and Part 135 rules and would require that fractionally owned aircraft be equipped with the following:

Comments to the NPRM are due by Oct. 16, 2001. Information regarding the NPRM can be obtained from Katherine Perfetti, Flight Standards Service, phone 202-267-3760. Or e-mail katherine.perfetti@faa.gov. A copy can be accessed from the National Business Aviation Association Web site: www.nbaa.org. See also www.faa.gov.

Honeywell Initiatives
The Paris Air Show was a busy time for Honeywell. The company announced safety, technology and e-commerce projects.

Honeywell’s Nova Wire Integrity Program (NWIP), expected to debut in the fourth quarter of 2001, will provide operators an integrated, portable system to test and identify faulty wiring and connections in older aircraft. Honeywell predicts it will reduce maintenance costs by 20%..

NWIP functions include wiring system modeling, failure analysis, trend monitoring, prognostics, diagnostic analysis, logging of test results, and automatic test generation. The system can test up to 5,000 wires in a minute and locate faults to within 1 cm.

Honeywell also is developing a new flat-panel, Multi-Function Radar Display (MFRD), expected to be available in the third quarter of 2002. The unit will show moving-map navigation, weather, terrain, traffic, checklists, video and other information. The MFRD is intended to retrofit existing aircraft to comply with expected safety mandates and accommodate new features, such as three-dimensional imagery, the company says. The new display aims at aging commercial, military, regional and business aircraft, including helicopters.

An AEA Honor
Mid-Continent Instruments has won the Aircraft Electronics Association’s (AEA’s) "Associate Member of the Year" award at the AEA’s 44th Annual International Convention and Trade Show in Dallas. This annual award recognizes companies for their participation in the association and in the general aviation industry. Visit www.aea.net and www.mcico.com.

Suppliers for the A380
European airframer Airbus has announced more suppliers for its super jumbo A380. Thales Avionics, together with its German subsidiary Diehl Avionik Systeme, will provide flight deck displays. The control and display system (CDS), which handles all display and dialog functions, features eight liquid crystal displays (LCDs) with 6-by-8-inch (15-by-20-cm) screens, two keyboards, and two cursor control devices. Trackballs allow pilots to reconfigure the flight path in seconds, Thales claims. The CDS will be integrated at Thales Avionics’ Bordeaux facility.

Agreements, Agreements
There is plenty of consolidation in the avionics industry. And when companies aren’t merging or acquiring each other, they appear to be cooperating and coordinating with each other. The proof is the many recent agreements made among avionics companies. Consider the following:

Paris, By the Numbers
The 2001 Paris Airshow is now history, but it left behind some impressive figures. The show organizers, the Salons Internationaux de L’Aeronautique et de L’Espace reported the following stats for this year’s event:

Thales is now the sole shareholder of Thomson Marconi Sonar (TMS), having acquired in late July BAE Systems’ 49.9% share. TMS was formed in 1996 by GEC-Marconi and the former Thomson-CSF.

Mobile Training for STARS
The Federal Aviation Administration (FAA) and its contractor, Raytheon, have rolled out the latest addition to the Standard Terminal Automation Replacement System (STARS) program–a van equipped with STARS controller and tower displays. Unveiled at FAA headquarters in Washington, D.C., the demonstrator will visit 13 sites this summer to familiarize controllers with the new air traffic control interface. STARS is a massive FAA program to upgrade displays and processing systems used to manage arrival and departure data for aircraft within a 60-mile (96-km) radius of airport terminals.

The National Air Traffic Controllers Association (NATCA), among other things, wanted the new system to allow for traditional button-based interfaces to minimize head-down time and to use the familiar ABC keyboard, in addition to toolbars and track balls, to access functions. The original display "was designed without controller input," says John Carr, NATCA president, adding that he’s "ecstatic" about the full-up STARS system.

"Now that the [STARS] development is almost complete, there’s a need to get the message to users that they got what they asked for," says Bob Eckel, Raytheon vice president for air traffic management. FAA funded the 28-foot (8.5-m) self-contained van, and Raytheon paid for the equipment, including a terminal controller workstation and two sunlight-readable tower displays. (The second sunlight-readable display is viewable outside the van.) Visit www.faa.gov and www.raytheon.com.

New Radios for Speedwing
The British Airways subsidiary, Speedwing, has ordered T6 multimode radios from Park Air Systems to update its ground-based VHF radio infrastructure. The radios supports both 25-kHz and 8.33-kHz channel spacing and will thus comply with International Air Transport Association (IATA) regulations for reduced channel spacing, due to take effect late this year. The T6 radios will be installed in base stations wordwide, following the initial deployment to the new Athens Spata airport in Greece. Airlines use the Speedwing radio service for operational mobile communications. Visit www.parkairsystems.com.

IFE for Narrowbodies
Airbus recently approved Thales Avionics-Inflight Systems’ i-series cabin entertainment and communications system as an offerable product for its single-aisle aircraft. At a customer’s request, the i-series system now can be factory installed by Airbus. The i-series integrates broadband communication, in-seat power, and entertainment onto a single platform. Passengers can receive audio and video entertainment plus access to the Internet and e-mail on their laptop computers. Airbus is installing the i-series system in an A318 as a flight test demonstrator. The aircraft is scheduled to enter flight test in March 2002. Visit www.thales-avionics.com. 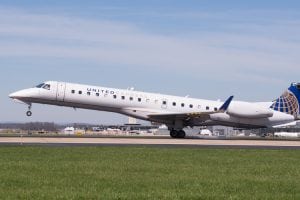