Universal has been working with Bombardier Aerospace to secure FAA, European Joint Aviation Authority (JAA) and Transport Canada approval of the UNS-1E on the Dash 8 Q400 turboprop aircraft. "Bombardier came to us about a year ago," says Don Berlin, Universal’s vice president and general manager-marketing division. "They had originally selected another [FMS] for the Dash 8 Q400 but decided to switch to Universal."

So, what is a Super FMS? What makes it different from the flight management systems that Universal has been supplying for almost two decades for aircraft ranging from small personal planes to air transport jets?

Basically, according to Berlin, Universal has significantly increased the processing power and the memory capacity of its new FMSs, to allow growth into the communication, navigation and surveillance/air traffic management (CNS/ATM) flight environment of the future. That means the UNS-1E, -1F and -1L include the following enhancements:

Other Super FMS features include the following:

The UNS-1L comes standard with a 4-inch (10-cm) diagonal display. The —1E has a standard 5-inch (12.7-cm) display, and the —1F comes with the option of either a 4-inch or 5-inch display. The 5-inch displays can present graphics and video, and show terrain imagery generated by Universal’s terrain awareness and warning system (TAWS), as well as weather graphics uplinked through Universal’s UniLink air-to-ground datalink. To load the navigation database, provided on a Zip disk, the Super FMSs include an Ethernet communication port that accommodates the faster 10-megabit/sec (Mbit/sec) transfer rate.

Universal Avionics is not alone in updating its flight management systems. A little more than a year ago, Honeywell introduced an enhanced version of its GNS-XLS system, designed primarily for the corporate aircraft market.

Used with both analog and digital systems, the GNS-XLS has an embedded GPS receiver and interfaces with external sensors, including VOR, DME, TACAN and inertial nav. With its radio management function, it will automatically select the best VOR and DME stations, depending on strength and location.

Not unlike the Universal FMS, the GNS-XLS can include a search-and-rescue (SAR) capability in which such functions as search patterns and mark-on-target can be incorporated.

Honeywell can update the previous version of the GNS-XLS or provide an upgrade kit that can be installed in the field. According to Dan Barks, Honeywell’s director of marketing, general aviation avionics, shop time for the upgrade requires about four hours, including the system’s removal and reinstallation. The kit includes a graphics video card, a 429 chip, a PCMCIA card with software, and a new keyboard.

Is the enhanced GNS-XLS upgradeable to enter the CNS/ATM environment? Noting that the CNS/ATM concept has yet to be clearly defined, Honeywell officials state that their FMS "holds no real limit to growth" in terms of processing and data storage capacity.

Bombardier Aerospace is seeking certification of the UNS-1E flight management system in its Dash 8 Q400 and plans production-aircraft delivery by this autumn. The first customer for a —1E-equipped Q400 will be Seattle, Wash.-based Horizon Air, which has 15 of the type on order and operates more than 40 Dash 8s in the 100, 200 and Q400 series.

But, as Bombardier announced at the recent Paris Air Show, the UNS-1E is not the only state-of-the-art avionics installed or planned for its newest Dash 8 variant. For one, Bombardier is working jointly with Thales Avionics and Universal Avionics to incorporate vertical navigation (VNAV) into the Q400. The function, coupled to the Q400’s autopilot, has been tested at Bombardier’s test facility in Wichita, Kan., and is slated to be available to customers along with the UNS-1E by this autumn.

In addition, Horizon Air ordered Rockwell Collins Flight Dynamics’ Head-Up Guidance System (HGS) for all the Dash 8 Q400s it has on order, and Bombardier now offers the system as a factory option. Horizon is scheduled to receive its first HGS system for the Q400 this autumn and plans to employ it in revenue service early next year. The airline has the HGS on other Dash 8 variants in its fleet, and according to Bob Fear, manager, Q400 product planning, Horizon claims the system pays for itself within two years by providing a significant operational advantage.

Future plans for the Q400 include updating its digital architecture from an ARINC 429 to the ARINC 702 standard. "429 made sense at the 1995 launch of Q400," says Fear, "but as we looked down the road, we could see we need more capability. In the interim five years, regulators and airlines alike have recognized the need to implement the precision air traffic environment that has been talked about for years. And with airspace congestion biting into airline profitability, operators appear to be willing to equip."

"We’re focusing on the Q400 now, but we plan to support the development of all Q-series airplanes to an RNP capability for 2005, if not sooner," says Fear, referring also to the year when the Federal Aviation Administration (FAA) plans to have National Airspace (NAS) Version 4 applicable. (Version 4, generally, outlines the pursuit of more aircraft-based solutions to reduce air traffic congestion and increase air safety.)

Why, in this wave of regional-jet buys, does Bombardier give so much high-tech attention to a turboprop? In large part, regional carriers see a growing need for the features long enjoyed by the major carriers, especially for aircraft with near jet-like speeds–as with the Q400, which has a 350-knot cruise speed.

For instance, two Q400 customers, Horizon Air and SAS Commuter, are having Airborne Communications Addressing and Reporting Systems (ACARS) installed in their aircraft. "It hasn’t been an OEM requirement from our customers until the Q400," says Fear. Now Bombardier offers as options on the Q400 two ACARS receivers made by Honeywell and Universal Avionics. 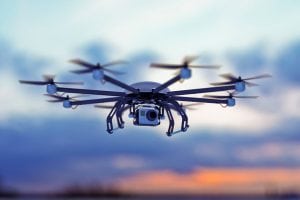