This became evident at the Avionics Maintenance Conference (AMC), in Hamburg, Germany, last April, when airlines voiced their complaints of IFE equipment support. In turn, IFE providers essentially acknowledged the complaints’ legitimacy, but also insisted that the shortfall in supporting their IFE systems is being addressed.

Although the major IFE suppliers say they are making significant improvements in their after-market support, reliability–particularly with new or updated systems that feature interactivity and video-on-demand (VOD)–is failing to meet customer expectations, industry sources tell Avionics Magazine. As a result, IFE has become a double-edged sword for airlines: a powerful marketing tool when it works, and a customer-relations nightmare when it doesn’t.

A Delay on New Features

IFE systems failure can mean serious revenue losses for the airlines if passenger dissatisfaction leads to switching carriers, or a negative image influences new customer selections. Some airlines, therefore, are delaying implementation of new features such as VOD and interactivity, sticking with simpler, more reliable systems.

This month, we gain the airliners’ and airframe manufacturers’ points-of-view on the subject of IFE support. Next month, in part two, we will present the IFE equipment manufacturers’ response and efforts to improve support.

For this month’s coverage, we talked to two airlines, United and Air Canada, about IFE product support. Both mentioned problems in this area at the AMC.

"At United Airlines, we changed course and decided we did not want to be the technology leader any more because of the impact on our customers from a reliability standpoint," says Mary Rogozinski, United’s Marketing Division manager of on-board systems planning. "Our chairman mandated that we not use our customers as guinea pigs. Instead, we decided to evaluate systems based on reliability."

Air Canada shares the same philosophy. "Our executives are very keen on making these systems work," says Ford Chown, the airline’s chief engineer-interiors. "Passengers think if the video doesn’t work, they wonder what else is wrong on the airplane, so we concentrate a great deal on reliability."

Meanwhile, IFE suppliers devote major resources to improving their systems’ reliability and supportability. Some IFE equipment contracts guarantee a high reliability rate–about 99.5% seat availability–with the supplier paying back a penalty if it is not met. Also available to airlines is a turnkey support service that ranges from "meet and greet" line maintenance support to bench and shop support, along with spares provisioning. This service, however, offers little relief to the airlines that, because of labor agreements and other factors, maintain their IFE systems in-house.

A major problem facing the IFE industry is lack of an adequate standard to measure reliability. Airline, original equipment manufacturers (OEMs) and supplier representatives, working through the World Airline Entertainment Association (WAEA), have called on ARINC to develop such a standard. (WAEA began the initiative to get an industry-type measure. It organized a cabin systems taskforce to establish standards and quality, and a seat integration group, both being led by Boeing.)

"We need a stand-alone (ARINC) committee to address standards for cabin equipment–similar to the committee that addresses cockpit avionics," Rogozinski states, referring to the Airlines Electronic Engineering Committee (AEEC). Funding such a committee is an issue that currently remains in limbo, but Rogozinski believes the airlines, which fund the ARINC committees, could contribute based on the number of IFE-equipped aircraft they operate.

Rogozinski’s plea is joined by Air Canada’s Chown. "What would really help everybody is to have a common seat availability measure and a definition of what it means. If my system is 99% and someone else’s is 97%, we would know we were better, not just measuring it differently," he maintains.

Boeing also has been active in pushing for industry standards. David Kirkland, the manufacturer’s lead engineer for cabin systems, says recent activity in standards "came out of concern that cabin systems were not getting enough priority or attention from the current ARINC system [committees]." Traditionally, the flight deck has demanded most of the attention, "but in the past five-to-six years, the amount of electronics in the cabin has become roughly equivalent [to that in the cockpit] in some airline aircraft," he says.

Measurement standards also would help provide industry-wide statics of IFE equipment reliability and availability. So far, a complete picture of the issue is unavailable. "IFE suppliers tout the seat availability on systems they maintain themselves," he says. "But I keep telling them, why don’t they do stats on their systems that they do not maintain?"

To its credit, ARINC has responded to the airlines’ and OEMs’ pleas by establishing under its AEEC a cabin equipment interfaces (CEI) subcommittee. It operates jointly with WAEA. Here, ARINC has established an active working group concerning IFE equipment reliability and availability, and has circulated a project paper under Specification 628 to establish availability measurement guidelines. The most recent AEEC/WAEA subcommittee meeting was held in Shannon, Ireland, in late June.

United Airlines confronted the issue of IFE reliability when it introduced its new B777 in 1995. Problems arose with one of the aircraft’s first interactive IFE systems.

"There was supposed to be a computer at every seat; you could play games, all controlled by menus," recalls Rogozinski. "But when we took delivery, [the system] was not functioning as originally defined. What the supplier promised, and what we were looking for, greatly exceeded the technology of the day.

"So, we decided to evaluate systems for our other widebodies, including future 777s, based on reliability. We wanted to be competitive, but we wanted to offer more reliable systems," she adds. United decided to order the B/E Aerospace (now Sextant In-Flight Systems) System 2000, an older, distributed system that offered multiple-channel video at every seat.

As with other airlines, United faced the pitfalls of complex systems that require much electrical power. Seats in United’s premier class–which provide electrical power, phones and laptop hookups–require their own electronic box, and the resulting "power draw" impacts the need for cooling. The issue is compounded when you add interactive and VOD systems, says Rogozinski. So, to equip economy sections of its 747-400s with IFE, United is talking to a company that proposes a power supply for all systems that is housed in one electronic box.

United handles its own IFE maintenance and admits its technicians encountered a steep learning curve. Making the curve steeper is the fact that, traditionally, cabin equipment has been considered a lower priority than flight critical avionics.

The world’s largest air carrier, United, has the largest number of IFE-equipped aircraft in the world. Ninety-five percent of its fleet has some form of cabin entertainment-although much of that is simply audio entertainment in its narrowbody fleet. Beginning last May, United installed in-seat video in premium class of all its widebodies and also in coach class in its widebody international aircraft, except in 747-400s, where weight proved to be a limiting factor.

United has had most of its Boeing 777 and 767 IFE systems installed at a modification center run by the Tramco Division of BFGoodrich, located across from Boeing’s Everett, Wash., facilities, and its 747s outfitted at Mobile Aerospace, Mobile, Ala.

Air Canada also performs its own IFE maintenance and has set up a "help line," in which cabin crews can call for technical support. Managed by Air Canada technicians, the service solves 50% of the airline’s IFE problems now, Chown says, who has engineering responsibility for the entire cabin, not just entertainment systems.

Air Canada uses distributed in-seat IFE systems provided by Matsushita and Sextant, and more recently, Sony’s Passport audio-video on demand (AVOD) system on Airbus A340s and A330s. (Sony is in the process of being acquired by Rockwell Collins.)

The airline says it experienced some problems with spare parts and lead times with the Matsushita system several years ago, but Chown believes the IFE supplier has restructured and turned around its support effort. He further admits that the new Sony system, which Air Canada helped develop as a lead customer, is complex and has had some problems, but he remains a firm believer in the future of video-on-demand.

"I really support VOD. There is nothing better," Chown asserts. "But you need support to do it.

"The problems included those with computers, and with flash drive memories in media server units, necessitating a switch to hard drives," he explains. "A program is underway to upgrade the software.

"The system is not as good as we all dreamed it would be, but it is audio-video on demand–really the only one out there now," Chown claims.

He reports that Air Canada plans to install in its new B767s Matsushita’s new 3000 system, scheduled to be available this autumn. "We’re trying to take some initiative, some leadership, but not get stuck."

Air Canada has in-seat (personal) video in the business class of all its international widebodies. Economy sections are provisioned for the Sony VOD system, but a decision to install it is pending.

"Part of spending money [on VOD systems] is to be able to support them," says Chown. "We have crews out there that have a lot of jobs to do on the aircraft, and running video isn’t one of them. So, from a design standpoint, we try to make [the system’s support] as simple as possible."

While working with Matsushita and Sony on state-of-the-art IFE systems, Air Canada, too, currently relies on the tried-and-true B/E Aerospace (Sextant) system. "It’s just a distributed system, but it plugs away," says Chown.

Air Canada also is looking at an audio-on-demand system produced by Transdigital Communications Corp. of Brea, Calif., for its aircraft without in-seat video.

Both Boeing and Airbus play an active role in supporting increased reliability of IFE systems through their supplier relationships and industry activities. They do so even though their influence in IFE is limited; some 80% of the cabin entertainment systems are buyer furnished equipment (BFE), i.e., provided directly to the airline customer by the IFE suppliers.

Still, the OEMs offer their customers a "catalog" of IFE options as factory-furnished equipment. "We install the systems and integrate them into the aircraft systems, making sure they are operable and are certified," says Boeing’s Kirkland.

"We recommend systems that work well in our aircraft," adds Mark Luginbill, communications manager at Airbus. "But if the airline wants another system, we will work with them to make sure the installation works. It’s in our best interest make sure the IFE system works in our aircraft."

Boeing has quality assurance representatives at its IFE suppliers, "making sure their processes meet our quality standards," Kirkland says. At times, Boeing also will have an engineering contingent on site, helping the IFE producers develop a new system and establish requirements.

"We work with IFE manufacturers to assure ease in the installation," says Longinbill, "and we’re working closer and closer with them to coordinate the maintenance of their systems."

In that same vein, Boeing established its newly-named Boeing Airplane Services (BAS) customer support organization. In response to a plea from some airlines, BAS offers support of Boeing aircraft in the field and helps coordinate and communicate between the supplier and the airline. "We will offer any kind of support or reliability enhancement the customer wants," Kirkland says.

Next month, we publish part two of our coverage on IFE support and initiatives by the cabin entertainment providers. 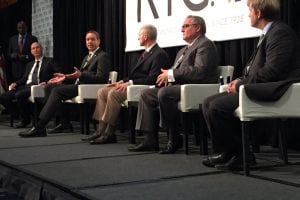