As you read this report, general aviation (GA) pilots in Alaska are receiving one of the best tools the U.S. Federal Aviation Administration (FAA) has ever granted them: real-time weather reports in their cockpits. The Alaskan pilots, participating in FAA’s Capstone program as part of Safe Flight 21, are the first to benefit from this new service, which should be available to all U.S. GA pilots by year-end.

This safety-enhancing data, delivered in text form, is also free.

FIS-B is to transmit at 31,500 bits per second (31.5 kbps). To assure adequate bandwidth for the FIS data link (FISDL), the FAA granted each company two 25-KHz VHF frequency channels–from 136.425 through 136.500 MHz. The contracted firms are responsible for building the ground infrastructure, providing a data radio, and delivering the free weather information. They also will use the FISDL to offer to aviators a menu of "for-pay" services.

"FISDL is designed to provide coverage throughout the continental U.S. from 5,000 feet AGL [above ground level] to 17,500 feet MSL [mean sea level], except in areas where this is unfeasible due to mountainous terrain," according to the FAA. "Aircraft operating near transmitter sites will receive useable FISDL signals at altitudes lower than 5,000 feet AGL, including on the surface in some locations, depending on transmitter/aircraft line-of-sight geometry.

"Aircraft operating above 17,500 feet MSL may also receive useable FISDL signals under certain circumstances," says the FAA. The agency inserted this language, plus other operational information on FISDL, in the Airman's Information Manual this past February (in section 7-1-10).

The advent of weather in GA cockpits is one result of several cooperative projects between the FAA and the National Aeronautics and Space Administration (NASA). They include the Advanced General Aviation Transport Experiment (AGATE), the Aviation Weather Information (AWIN) effort within NASA’s Aviation Safety Program, and the FAA’s Safe Flight 21 program.

As participants in AWIN and AGATE, ARNAV and NavRadio are confident that they can deliver the FAA’s FIS-B service. Their head-to-head competition for FIS-B customers has begun.

The seeds for AAN were planted in the 1980s, when ARNAV integrated its GPS receivers and a satellite data link to track fleets. ARNAV subsequently switched its data link to VHF and struck paydirt in 1993 with an FAA contract for a vehicle-tracking system at Denver International Airport.

Also in 1993, ARNAV obtained a contract with Erlanger Medical Center in Chattanooga, Tenn., to provide a two-way, flight-following data link for Erlanger's airmedical helicopter. ARNAV delivered an area network of VHF towers and the helicopter avionics. Erlanger gained flight-dispatching/following, plus the capability to use non-precision GPS approaches at some remote-site heliports. Today, about 100 airmedical helicopters use ARNAV’s data link system.

In 1994, the Civil Air Patrol tested ARNAV’s flight-following data link in Pennsylvania, and the FAA tested it in Alaska. Then in 1996, the FAA chose ARNAV’s data link system to test Free Flight concepts during the Summer Olympic Games in Atlanta, Ga. The project, Heli-STAR, used ARNAV’s data link in lieu of radar for low-level air traffic control. The data link also delivered weather, text messaging, and a cockpit display of traffic information (CDTI) for all participating aircraft.

By 1997, ARNAV gained FAA approval to broadcast real-time weather data, in text and color graphic formats. The service, WxLink, was launched in late 1997, delivering METARs, AWOS data, AIRMETs, SIGMETs, PIREPs, forecasts, and graphic displays of Doppler weather radar (NEXRAD). WxLink’s most notable customer is the state of Virginia, which inaugurated in 1998 state-wide, free delivery of WxLink text and graphical weather to all aviators.

"We plan to announce initial operating capability of the FIS-B service in Anchorage, Alaska, and in Virginia in May," Hamner says. "The contract allows us to initiate FIS-B using VDL Mode 2 or any FAA-approved architecture, of which there are two: ARINC’s ACARS and ARNAV’s AAN. We are offering FIS-B over our current infrastructure, which transmits at 9,600 bps, then will move to VDL Mode 2, which transmits at 31,500 bps, when it becomes available."

ARNAV’s current infrastructure includes the towers and a national communications center co-located at ARNAV’s headquarters in Puyallup. Two pieces of equipment are needed to receive FIS-B: a data radio and an MFD. ARNAV’s FIS-B avionics are FAA-certified and available.

"Data sent from the center is received in the cockpit via ARNAV’s DR-100 data radio, which is a low-cost [$1,495], FAA-certified black box with every frequency within the aviation band preprogrammed," Hamner explains. "It automatically tunes to the correct tower. If new frequencies are awarded, that is no problem, because the box will tune to the correct frequency. As the VDL Mode 2 towers become established, the DR-100 can be sent back to ARNAV for an upgrade to include the VDL Mode 2 radio.

"The other piece of equipment needed in the cockpit, the MFD, doesn’t have to be an ARNAV product," says Hammer. "We have an OEM developer’s kit available so other MFD manufacturers can assure their product is compatible with the DR-100."

Both displays, which are moving map-based, can be integrated with other avionics, such as BFGoodrich’s Wx500 Stormscope, Ryan TCAD, or engine monitoring systems.

Besides the free FIS-B text information, ARNAV will broadcast two free graphic weather products. Transmitted with lat/lon georeferences, these are overlaid on the MFD’s flight plan and mapping data.

"Each product is available at various map scales–from the whole United States down to 100 nm and from flight level 390 to the surface. The scale is pilot-selectable.

While ARNAV has the operational jump on bringing weather to the cockpit, Honeywell undeniably has advantages in its corporate size and avionics breadth. Also a provider of data link weather into airliner cockpits, Honeywell clearly made a very smooth move by acquiring NavRadio last summer just as the FAA awarded the FIS-B contract.

Through its participation in AGATE and AWIN, NavRadio has successfully tested its data link system. Besides uplinking weather, NavRadio also is working on an intriguing system to "downlink" weather at part of its AWIN work. Called Electronic-PIREPs (E-PIREPs), the concept uses a multifunction probe on the aircraft to gather such data as air temperature, dewpoint, icing encounters, turbulence indicators, and aircraft altitude and heading. The data would be transmitted via the data link and then relayed to national weather centers for compilation into weather reports, which can be uplinked to other pilots.

With NavRadio now in its family, Honeywell is racing ahead with its FIS-B system and expects to launch its network this September.

"Honeywell’s WxSight is our FIS-broadcast network," explains Dan Barks, director of Honeywell’s business and general aviation marketing. "It uses VDL Mode 2 to transmit at 31.5 kbps. That translates into being able to do a full composite radar picture in less than 10 seconds. As to refresh rate, every five minutes, we get a new picture from our weather sources and transmit it to the cockpit."

WxSight will broadcast text weather free, with other products, like graphic weather displays, Special Use Airspace status, and NOTAMs information, available for a monthly fee.

Honeywell will establish about 220 ground stations, comprised of a two-foot (0.61-meter)-square box containing NavRadio’s VDL Mode 2 transmitter, a small satellite dish, and a satellite data link. The boxes will be placed at strategically selected locations. Honeywell is calling upon its nationwide network of distributors to host the ground station sites.

"Data is transmitted by ground stations, and aircraft

will need a VDL Mode 2 radio to receive it," says Barks. "Our product is the Bendix/King KDR 510 data radio.

"The aircraft will also need something to display the information, typically a multifunction display," he adds. "Our plans are to use an open architecture, so that the data can be displayed on other manufacturers’equipment." (Honeywell’s FIS-B MFDs are the Bendix/King KMD 150 or the new KMD 550 and KMD 850.)

The FIS-B data link is giving Honeywell a great opportunity to showcase its avionics-integration strengths and bring other safety-enhancing products to GA cockpits.

For example, the satellite link in Honeywell’s FIS-B transmitters will enable its new Bendix/King WingMan Services. To be operational by December, WingMan will offer the following services via satellite data link:

WingMan requires an MFD and the KDR 110 data link transceiver, which allows two-way transmissions (as opposed to the WxSight’s KDR 510, which is a receive-only radio).

IHAS includes the KDR 110 data link transceiver, an enhanced version of the KMD 150 MFD. The display has a moving map, with extensive aeronautical and terrain database, and a KT 73 data link transponder.

Through the KT 73, IHAS can deliver a traffic information service (TIS) similar to TCAS, but at a far less costly rate. Picking up transmissions from the FAA’s new network of 118 secondary surveillance radars, the KT 73 detects all transponder-equipped aircraft within +/-1,200 feet and 5 nm of the aircraft, then displays on the MFD the distance and bearing of other aircraft. If other aircraft have altitude-reporting transponders, Honeywell’s TIS will also display that altitude and whether it is climbing or descending. (The TIS component of IHAS can be purchased separately. In fact, Honeywell plans to make available by 2001 an upgraded version, using the KMD 550/580 MFD and the KT 73 data link transponder.)

To add terrain avoidance to IHAS, simply plug in Honeywell’s new Bendix/King KGP 560 EGPWS (enhanced ground proximity warning system), which was to be certificated in May. Similar to the Mark V/VI/VII/VIII family of EGPWS for turboprops and jets, the KGP 560 is designed for piston and light turbine aircraft.

Priced at $10,000, the KGP 560 interfaces with an MFD and uses aircraft position and a terrain database to create a color-coded display of terrain relative to the aircraft’s altitude. It sounds an alert about a minute or more in advance of an impending collision with terrain.

As is clear from the new offerings from ARNAV and Honeywell, the FAA’s FIS-B contract does far more than broadcast weather to the cockpit. The key is the data link, which brings with it the myriad capabilities of the wireless communication industry.

Given the quantum leaps in capability and safety new data link technology will bring to all cockpits, we can’t help but ask standards-writing committees to work a bit faster. 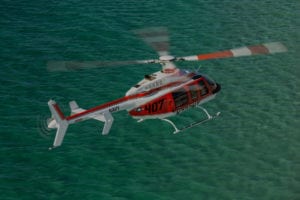