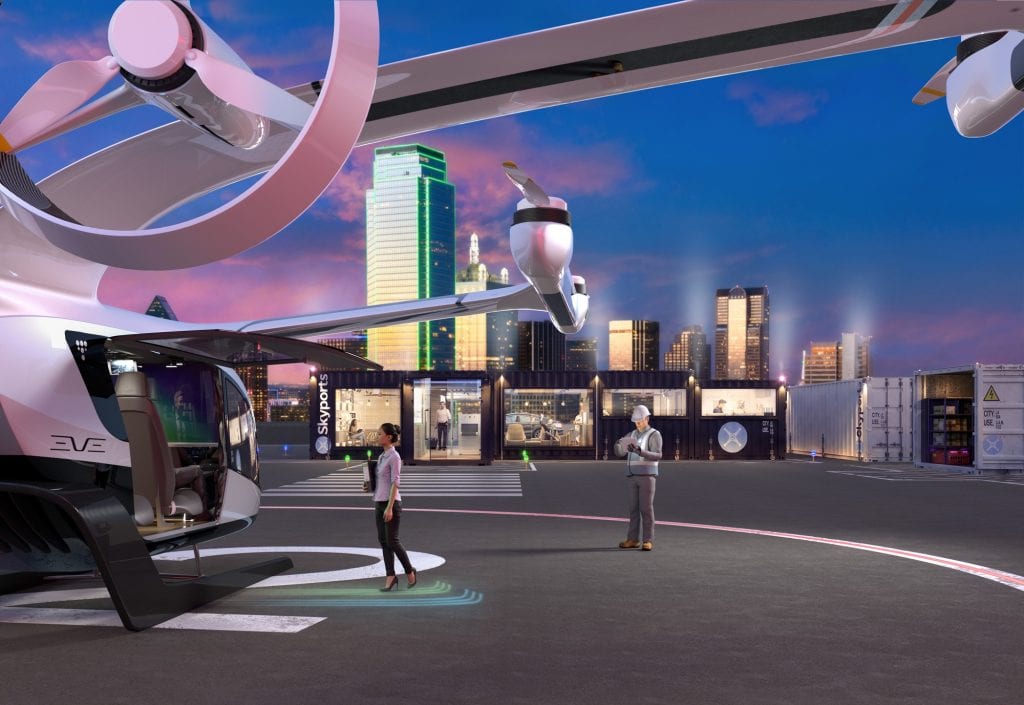 Eve and Skyports have formed a partnership for eVTOL operations in Asia and the Americas. (Eve)

A new partnership between Eve Urban Air Mobility and Skyports is aiming to advance the adoption of electric vertical takeoff and landing (eVTOL) aircraft operations in markets in Asia and the Americas, Eve announced in a June 21 press release.

As part of the agreement, the two companies will create a concept of operations to inform operational procedures and vehicle and services development, according to the release. The concept of operations will be developed using Eve’s eVTOL, urban air traffic management (UATM) software, and UAM services.

“In transition to a low carbon economy, the aerospace industry depends on disruptive innovation to create a more sustainable future,” André Stein, president and Chief Executive Officer of Eve, said, in a statement. “With urban air mobility, we have a unique opportunity to co-create vertiports, vehicles, and operation, designing a new and optimized mobility ecosystem from the ground up. We are thrilled to have Skyports in this journey to develop UAM solutions in Asia and the Americas, bringing us a step closer in providing commuters and travellers [sic] with an entirely new, zero-emission, experience.”

The partnership will also include a market readiness exercise and vehicle concept of operations study in Brazil that Skyports will lead, according to the release.

“Our partnership with Eve paves the way for rapid innovation in UAM, accelerating innovation to meet the growing demand for eVTOL services,” Duncan Walker, Chief Executive Officer at Skyports, said in a statement. “We are looking forward to the expanded partnership, unlocking new opportunities in this fast-growing market.”

The relationship between Eve and Skyports developed in 2020 and the companies have previously worked together on a concept of operations for Airservices Australia and in the UK, according to the release.

Eve announced partnerships with Helisul Aviation and Halo as well in the past month.