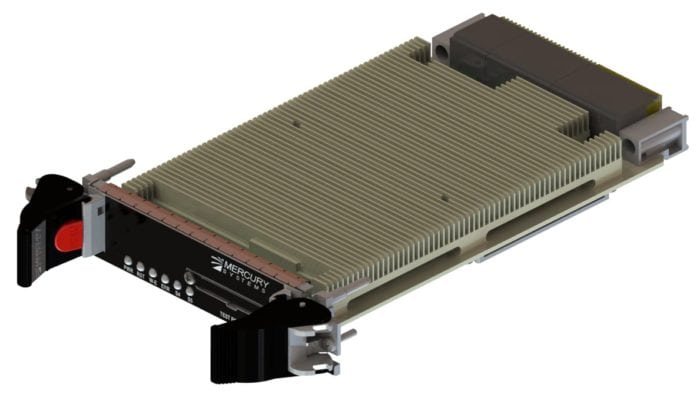 By integrating the FPGA and carrier functionality into the same board, Mercury eliminated the FPGA processing and carrier boards from what typically would require a three-circuit-board setup.

“When you look at today’s unmanned systems, the type of future machine learning and artificial intelligence applications that the prime OEMs want to achieve are going to require this type of form factor,” said Yablonski.

Wafer-stacking and system-in-package (SiP) miniaturization technologies are featured on the new blades, along with a mezzanine expansion site to keep the size, weight and power of the blades within an optimal range.

Mercury Systems has been seeing increased interest from the OEMs and military domains it supports to deploy embedded computing that can support processor intensive machine-learning and artificial-intelligence applications, said Yablonski. The designers also focused on including a connector that could support a wide variety of applications, including connection to a chassis or a graphics processing unit (GPU), he added.

The LDS3517 also features system-security engineering and cyber-hardening and has been ruggedized for military applications. Mercury describes this as a modified off-the-shelf-plus (MOTS+) technology. The company is taking commercial-off-the-shelf (COTS) hardware and ruggedizing it for the military environment.

“Security is in big demand right now,” said Yablonski. “As we shift into supporting these more advanced applications, security in the software drivers, securing that embedded environment is a major focus for us right now.”

Ike Song, VP and GM of mission systems for Mercury, said that keeping safety and security both in mind is a fundamental value to Mercury and something Mercury looks for in companies whose products they'll integrate.

Some of the new missions that could be supported by the LDS3517 could include advanced on-platform electro-optical/infrared (EO/IR) and EW cognitive processing, said Joe Plunkett, senior director and general manager for sensor processing solutions at Mercury Systems.

The U.S. Defense Advanced Research Projects Agency’s (DARPA) RF Machine Learning Systems program could eventually use the board for its research around digital, programmable radio frequency (RF) equipment and cognitive EW technologies for the future.