ATR is evaluating the use of the ClearVision enhanced vision system in low visibility conditions. The French OEM took a prototype ATR 600 aircraft to Guernsey in June for final testing of the system.

ATR selected Guernsey because the location often sees heavy fog due to its location within the English Channel between France and the U.K. Pilots from the local Guernsey airline, Aurigny, also participated in the tests as the company is interested in how the system could benefit their operations.

In 2017, Aurigny paid more than $1 million as a consequence of fog-related forbidden landings; primarily on hotels to accommodate re-routed passengers, according to ATR.

ClearVision is an optional upgrade offered by ATR with the new Standard 3 avionics package on its 600s. The  different ClearVision options for ATR pilots, including a head mounted visor worn by pilots. There is also a second option to combine the head mounted display visor with a synthetic vision system, or a third where a combined vision system combines both enhanced and synthetic vision into the head worn display. 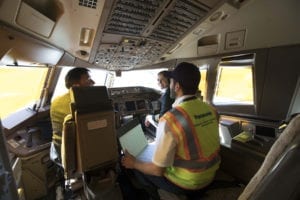