This project is a partnership between Northrup Grumman, the U.S. Army Prototype Integration Facility and Redstone Defense Systems. A contract was awarded in 2014 to Redstone, and Northrop Grumman provided the new avionics suite. The upgrade replaces old analog gauges with digital electronic instrument displays. Northrop Grumman says the upgrade is one of the most advanced avionics solutions the Army has.

The goal of the program is to modernize the Army’s entire fleet of UH-60Ls through cost-effective cockpit upgrades. The UH-60V solution is aligned with the Future Airborne Capability Environment (FACE) standard, complies with FAA and EASA global air traffic management requirements and is compliant with safety-critical avionics standards. Add in that it’s nearly identical to the Sikorsky UH-60M pilot-vehicle interface, the system could travel across military and civilian airspace while allowing for common training and operational employment.

On the civil side of the market, Rogerson Kratos recently flew a modified Black Hawk with a digitized cockpit for the first time. That modification also comes complete with open architecture capability and replicates UH-60M pilot-vehicle interface. 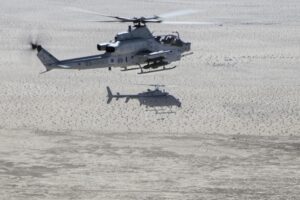