[Avionics Magazine 06-23-2016] The Flight Safety Foundation (FSF) has released a new investigative study that identified immediate, mid-term and long-term safety benefits from the introduction of space-based Automatic Dependent Surveillance-Broadcast Out (ADS-B Out). FSF's report, "Benefits Analysis of Space-based ADS-B,” deems the introduction of the technology as a global surveillance system for aviation can provide enhanced safety for oceanic operations, reduced separation between aircraft and a new option for remote regions of the world where surveillance today is lacking. Globalstar's concept of operations for space-based ADS-B. Photo: Globalstar.
Space-based ADS-B uses the same surveillance technique as ground-based ADS-B, which relies on aircraft broadcasting their identity, GPS position and other data to ground automation systems that then relay the information to Air Traffic Control (ATC) within a designated airspace. Since 2010, two companies, Aireon and Globalstar, have emerged as the aviation industry's main providers of space-based ADS-B.
Aireon has redesigned traditional ground-based ADS-B radio receivers into space-grade receivers on the Iridium Next satellite constellation, which Aireon claims will allow for global surveillance using the 1090 MHz ADS-B signals emitted by aircraft equipped with 1090 MHz configured ADS-B transponders. Globalstar, in collaboration with ADS-B Technologies, also has had its ADS-B Link Augmentation System (ALAS) air traffic management system flying since 2010. ALAS is capable of space-based ADS-B operations support for both 1090 or Universal Access Transceiver (UAT) 978 MHz, which is only an option at lower altitudes within the continental United States. The rest of the world's Flight Information Regions (FIR) that already have ADS-B or are in the process of deploying ADS-B, use 1090 MHz.
Immediate Benefits
One of the biggest immediate benefits that FSF's report finds is that the introduction of space-based ADS-B can reduce separation standards for aircraft flying in oceanic airspace using the new surveillance technology and standards established by the International Civil Aviation Organization's (ICAO) Separation and Airspace Safety Panel (SASP). According to FSF, SASP conducts mathematical and collision risk modeling to assess and report on separation standards using a combination of Performance Based Navigation (PBN) requirements for aircraft operating along an Air Traffic Service (ATS) route, instrument approach or designated airspace, and the digital aircraft communications technology ANSPs use in that airspace.
Currently, the minimum separation standards established by SASP for oceanic airspace where traditional surveillance and direct Very High Frequency (VHF) radio communications are not available, is 30 nautical miles (nm) of lateral and longitudinal spacing between aircraft.
"SASP is about to change the 30 nm lateral standard of Required Navigation Performance (RNP) 4 to 23 nm, and there are new RNP 2 longitudinal standards soon to be finalized. These standards will come at a cost to both operators and ANSPs. It will require operators to pay for an increased message reporting rate, additional flight crew training and, in some instances, aircraft certification fees. In addition, ANSPs will have to invest in upgraded conflict probing tools. ANSPs that have committed to space-based ADS-B will not need to invest in this capability," the FSF report noted.
FSF interviewed members of the ICAO SASP, who anticipate that the use of space-based ADS-B in combination with existing communications systems can lead to a 15/15 nm standard. The panel expects to require 12 months of data to analyze and validate the newly proposed standard, but has told FSF that the modeling and validation can be complete by 2018.
The FSF report also notes immediate benefits can be derived through space-based ADS-B for enhanced global flight tracking, reducing aircraft position errors that occur near the boundaries of two different Flight Information Regions (FIRs) and reduced emissions and fuel burn.
Mid-Term Benefits
The report sees space-based ADS-B in the mid term as providing a generational leap in air traffic surveillance technology for countries that never introduced some of the legacy radar technology that is still in use today in North America and many European countries.
Additionally, FSF's report notes the use of space-based ADS-B can also achieve greater interoperability between ANSPs in different regions as well. The deployment and acceptance of space-based ADS-B by different ANSPs around the world will provide a "a global surveillance 'blanket' that will allow any region or country to immediately work collaboratively with adjacent countries to introduce regional interoperability programs," FSF notes in the report.
FSF also interviewed experts who believe space-based ADS-B can improve strategic planning, contingency management and operational situational awareness in airspace where there are designated conflict zones or volcanic ash clouds. Often in these situations, reliable surveillance is unavailable, so space-based ADS-B could provide the area with sufficient surveillance capability without installing an ADS-B ground station but rather just by pulling the signals off of the aircraft and making them available to airlines and ANSPs affected by that airspace.
FSF also seeks more research on the impact that space-based ADS-B can have on reducing Controlled Flight Into Terrain (CFIT) and improved services for Visual Flight Rules (VFR) aircraft.
Long Term Benefits
Through the introduction of space-based ADS-B, and its expected global surveillance coverage, a common global surveillance database would be made available to all countries around the world. This would allow for organizations such as ICAO to share and analyze a global traffic data set and from that, identify and initiate new or enhanced global safety improvement programs, FSF says in the report.
The growing proliferation of commercial Unmanned Aircraft System (UAS) operations is also noted as a potential long term benefit through the use of space-based ADS-B. Specifically, FSF notes that a key safety issue for commercial UAS applications is the need to precisely identify the position of the UAS. While the FSF report does not fully explore the potential safety and efficiency benefits of space-based ADS-B to support commercial UAS activity, it does fail to mention that the majority of small UAS being used for those applications today are not equipped with (and not mandated for equipage) ADS-B 1090 MHz or 978 UAT transponders.
Finally, the report also notes a long term potential benefit for space-based ADS-B will be to stimulate consideration for the review of traditional Communications, Navigation and Surveillance (CNS) requirements for achieving Future Air Navigation System (FANS) compliance.

"It would not be unreasonable to anticipate that ICAO may consider how space-based ADS-B may support the CNS requirements framework, as ADS-B is already a globally recognized surveillance technology. This presents a new paradigm and safety performance enhancement opportunity for oceanic and remote (non-surveilled) operations," the report notes.

Dassault Falcon 50 to Use Universal Avionics 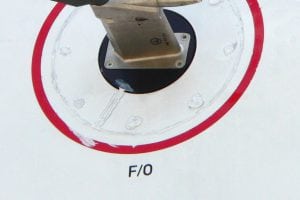