[Avionics Today 09-18-2015] Hawaiian Airlines Executive Vice President and Chief Financial Officer (CFO) Shannon Okinawa outlined the island carrier’s fleet modernization strategy over the next several years during a presentation at the Imperial Capital 2015 Global Opportunities Conference in New York on Thursday. The airline is nearing the end of an Airbus A330 fleet delivery schedule that began in 2010, retrofitting the interiors of its Boeing 717 fleet, and preparing to start integrating a fleet of Airbus A321neos and A330-800neos over the next five years. Hawaiian Airlines aircraft. Photo: Hawaiian Airlines.
Okinawa said the airline has been profitable every year since 2007, and the addition of the Airbus A330s to its long-range flying fleet has also provided stable fuel efficiency performance.
“We’re just at the tail end of the delivery schedule for A330s, we have three A330s deliveries in 2015, delivery of three in 2015 and one in 2016, and that will end our delivery cycle for our A330s. While we have this slight pause in our fleet growth, we are focused on maturing the new services that we started at the beginning of the decade and really building the foundation and getting our balance sheet ready for our next spur of growth, which will start in 2017 to 2018 with our A321s deliveries,” said Okinawa.
Hawaiian’s fleet modernization strategy in the near term involves an introduction of new Airbus aircraft and some innovative upgrades to existing Boeing aircraft. The airline is currently retrofitting the interior configurations of its 717 fleet to add more load capacity on inter-island routes, and Okinawa also sees some opportunities opening up in North America once the A321 deliveries begin in 2017.
Along with the influx of new Airbus aircraft, Hawaiian’s fleet of Boeing 767-300s are currently flying with Cobham Satcom’s Aviator SwiftBroadband satellite communications systems to enable the transfer of Aircraft Communications and Reporting System (ACARS) data messages over SwiftBroadband, as well as flight deck safety voice and IP connectivity. Updates on flight operations involving those aircraft should be available in early 2016.
During the presentation, Okinawa said the airline will begin retiring its 767s within “the early part of the next decade.”
“We provide infrastructure for the state and, at this point, this entity is not expected to grow. It is a very stable mature market that we don’t expect significant growth, but there are still some things that we can do. We have begun retrofits of our interior configurations of our Boeing 717s which fly these routes which gets us to a standard 128-seat configuration which adds about five to 10 seats. We are sort of organically gaining one new aircraft through this retrofit program,” said Okinawa.
“Looking forward we’ll focus on our new growth opportunities with our 321s which will mostly do West Coast flying to allow those 330s to then continue our international growth strategy. So, at that point, our growth will be much more moderate than what we saw at the beginning of the decade, but we’re still looking forward to additional growth,” she added.
On the carrier’s route structure, Okinawa told investors that the airline has a 90 percent market share for inter-island flying in Hawaii, and that 50 percent of its overall passenger revenue comes from flights to North America, with another 25 percent coming from international routes. That’s a 15 percent increase since 2010, when just 10 percent of Hawaiian’s operations were on international routes.
The airline expects that international growth trend to continue too, despite experiencing a slight decline in demand this year from flights to Australia.

“We’re quite happy with international in general, we had expected at the beginning of the year to see some demand softness in Japan and Australia. Japan is doing really well; that demand softness never really occurred. Australia is a little bit different, we do see some impacts on the currency on demand as well as the translation to U.S. dollar,” said Okinawa. “We’re happy with our mix … we do have a number of mature stable routes, we do have a number of developing routes. Usually when we start a new route we expect those routes to take 2 to 3 years to get to maturity, which is a level of profitability that is good enough to sustain itself; we don’t use any particular routes to subsidize other routes or entities. At this point we’re still happy with our long-term international strategy.” 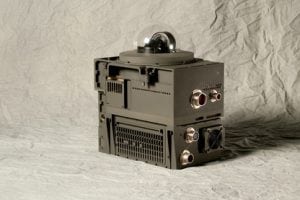 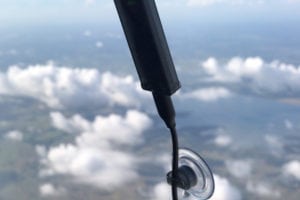 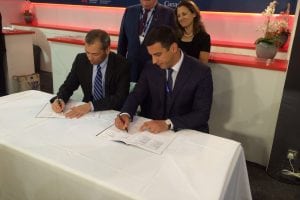