“While we’ve had products on many other aircraft, such as the Sikorsky S-76 and the AC352 and many other helicopters, this is the first time on the AC312E/C where we will provide not just the avionics, but also the displays, flight navigation display systems and communications and surveillance, as well,” Walker told Avionics Magazine.

Under the terms of the contract with HAIG, signed in the first quarter of 2015, Rockwell Collins will provide the CNS systems based on its popular Pro Line 21 integrated avionics suite. The aircraft will perform Search and Rescue (SAR), Emergency Medical Service (EMS) and general-purpose transport missions across China’s challenging airspace environment..

“It’s quite a unique operating environment in China,” Walker explained. “You have a vast area, very flat terrain with lots of cities and you need a reliable aircraft to deploy and respond to emergency situations. In the west, there lies an operating environment where you start to get toward the Himalayan Mountains. This means operators will be flying in quite high altitudes, 4,000- to 5,000-meter altitudes. One of the key requirements by Harbin was to be able to operate in those high altitude domains, which are very extreme.”

To address these challenging operating environments Harbin will be able to modify what Walker calls Rockwell Collins’ “plug-and-play” solution to configure the aircraft as the company sees fit for the individual helicopter’s particular mission. With initial delivery of the avionics suite to HAIG occurring in late 2015 to meet the first flight schedule, Walker notes the fast time to market was also an important aspect of the sale for the Chinese company. The Civil Aviation Administration of China (CAAC) is expected to certify the aircraft in 2017.

Over the next five years, Walker expects the Chinese market will provide big opportunities for avionics manufacturers.

“China is one of the highest growth markets in the world and therefore a high growth market for avionics as well, and it has been for the last few years,” said Walker. “By the end of this year, I understand there will be around 800 helicopters operating in China, and in the next four to five years that will grow up to about 1,500. While this is a small pool compared to North America, where there are about 9,000 aircraft, and Europe, where there are about 8,000 aircraft flying, the growth rate in China is going to be two to three times that of the overall growth market across the world.”

While recent stock market volatility and currency devaluation of the Chinese yuan against the U.S. dollar may have some amount of short-term impact, Walker expects strong growth to continue in the long term.

“Despite some fluctuations that you’re seeing in China’s market — the macroeconomic effect that is impacting China’s market at the moment — we believe that this is probably short-term pressure. Helicopter sales are long-term investments and capital acquisitions for the majority of the operators, and they look to the long term,” said Walker. “The market is largely underserved at the moment. You’ve got huge demand but there are only 800 aircraft here but I think it will continue to grow in line with the five-year plan the government has put in place. In the next one to two years you’ll see a bit of a slowdown, but in the next 5 years you’ll see steady growth.” 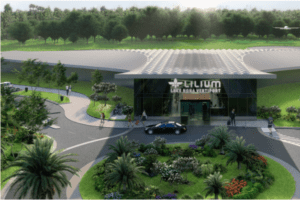