[Avionics Today 04-21-2015] Raytheon Company has received a $103 million contact from the FAA to field the newest element in a space-based system that aims to make air travel safer and more efficient. The Raytheon-supplied system will be a key feature of the FAA's Wide Area Augmentation System (WAAS), which improves the availability and accuracy of GPS signals to enable use by commercial and general aviation aircraft.

The company will develop a payload to be incorporated into a new geostationary (GEO) satellite and two associated ground uplink stations to support the WAAS system within U.S. airspace. WAAS significantly improves GPS accuracy from 100 meters to about two meters, enabling more direct flight routing, precision landing approaches and access to unimproved airports and remote landing sites without dependence on ground-based infrastructure.

The WAAS GEO 6 payload, which is slated for launch in 2017, will be hosted aboard a commercial host satellite in a Geostationary Earth Orbit (GEO) where it receives processed signals from the GEO 6 ground stations and then re-broadcasts them to user aircraft. The FAA operates three WAAS GEO satellite payloads at all times to ensure continuous system availability. The GEO 6 system, along with GEO 5 — awarded to Raytheon in 2012 — will replace two WAAS GEO payloads that are approaching the end of their service leases. The system will enter its 10-year operational phase in 2019. 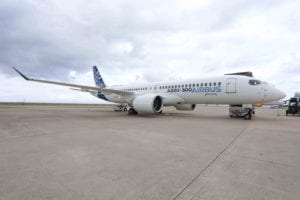