[Avionics Today 10-30-2014] Navigating the vast arena of NextGen technologies, procedures and regulations has proven a somewhat daunting task. The FAA, however, looking to provide a realistic roadmap for the program, released a three-year prioritization report earlier this month in an effort to help airports, airlines, Air Traffic Controllers (ATC) and the travelling public see the benefits of the program now, rather than later.

The NextGen Priorities Joint Implementation Plan, formed in collaboration with industry partners and organizations such as the National Air Traffic Controllers Association (NATCA), focuses on accelerating implementation of the procedures and technologies that will have the biggest impact on improving the efficiency of the National Airspace System (NAS). Over the next three years, the schedule of the NextGen program will focus on four main categories: surface operations, Multiple Runway Operations (MRO), Performance-Based Navigation (PBN) and data communications (DataComm). According to the plan, the FAA will look to institute Multiple Runway Operations at 28 of the busiest airports in the NAS, and PBN procedures will be implemented at three key metropolitan areas — Northern California, Atlanta and Charlotte.

“We’ve been working closely through the NextGen Integration Working Group to identify locations and scope the work,” said FAA Deputy Administrator Michael G. Whitaker in a speech at the NextGen Advisory Committee meeting earlier this month. “Perhaps the most important thing to come out of our collaboration is that we’ve forged a plan with industry for these key NextGen priorities, reducing the risks to implementation and assuring we can deliver benefits to the traveling public,” he continued on to say, referencing the working groups set to identify where industry and government should focus NextGen efforts and spending.

Achieving all of the goals of the three-year timeline will rely on government and industry collaboration in the working groups that are advising the FAA on how to accelerate implementation of NextGen capabilities that bring the biggest benefits to the NAS.

“We’ve gone several years building procedures with no real benefits associated with them,” said Jeff Woods, NATCAs Optimization of Airspace and Procedures in the Metroplex (OAPM) study team lead and NATCA representative to the project management office in an interview with Avionics Magazine. “The FAA has now shifted their focus and they’re becoming smarter about how they design and implement these procedures by creating work groups. This process makes sure that the proponent’s idea is coming in, we’re vetting it and makingsure this is something we can attach some benefits to.”

This includes looking to where NextGen procedures have already begun to offer benefits, such as Wake Turbulence Recategorization, which allows a higher volume of aircraft to fly within a given airspace by grouping them more optimally based on wake turbulence characteristics rather than weight class. Essentially saving time, fuel and generally making the airspace more efficient, evidence of which can be seen at the Memphis airport, which has seen throughput increases of 22 percent since implementing the new procedures, according to NATCA National NextGen Representative Melvin Davis.

The new plan looks to implement recategorization at nine new airports within the next year, with the process already started in Atlanta, where Whitaker says they are already seeing good results. “We implemented wake recat there on June 1, 2014. After 90 days, Delta Air Lines is reporting a 2.3-minute reduction in taxi out times and a 14 to 24 percent reduction in departure queue delays. In a hub the size of Atlanta, these are significant numbers,” he said.

But implementing these and other procedures at high density airports, such as Atlanta and the other two airspaces scheduled for metroplex redesign in the next three years (Northern California and Charlotte), won’t be easy.

“The benefits are obviously on a much larger scale at a larger metropolitan airport. The one thing it’s revealing, though, is some of our other decision support tools are lagging; time-based flow metering is one of them,” said Woods. Time-based metering allows ATCs to manage aircraft in congested airspace more efficiently by smoothing out irregularities and delivering a more consistent flow of traffic down to the runway, according to the FAA. While time-based flow metering has been implemented at 20 en route centers to date, ATCs at Atlanta and other large metroplexes are holding out for this, and tools like it, that can help them manage the high traffic airspace.

“NextGen is going to be tougher at heavier density levels and higher complexity levels, but it’s going to be more valuable there. So what we have to do is just make sure we get it right,” said Davis.

To mitigate these potential difficulties, the three airports looking to implement airspace redesign will do so on a phased implementation basis — adding new procedures every 56-day cycle — rather than the “big bang” approach that officials took with the Houston redesign, according to Woods.

“When we first started metroplex we were able to lay out the 36 month schedule and do it in a way to avoid some of the other big projects like [En Route Automation Modernization] ERAM,” Woods said. “When sequestration and furloughs hit it basically forced us to be in competition with some other programs. Atlanta and Charlotte are a prime example of that and we’re being delayed right now because they need to get ERAM implemented.”

However, even with detailed plans in place and experienced officials at the helm to help steer implementation, funding and staffing are already beginning to present problems.

“We’re very comfortable with the FAA’s plan … and about achieving the priorities as stated. But from a congressional side — from a funding side — you look at the very near future and, less than 12 months out, the FAA reauthorization is going to come up and roughly concurrent with that you see the sequester coming back,” said Davis. “Those types of unstable funding scenarios cause major problems when you’re trying to modernize.”

With sequestration and budgeting always peeking over their shoulders, it’s hard to put plans in place and stick to them. But all parties involved are hoping this is just the beginning of a larger effort, one that will take much collaboration, but also deliver great benefits.

“The environment that we’re in right now with NATCA, the government and the industry, the way we’re working together to not only identify the issues but get in there and come up with a solution, in all my years working airplanes I’ve never seen the environment the way that it is right now and it just doesn’t get any better than this,” said Woods. 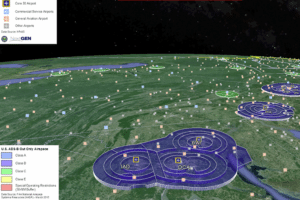 Report: ADS-B is a Cyber Risk to US Military Aircraft