[Avionics Today 08-13-2014] Gulfstream opened this year’s Latin American Business Aviation Exhibition & Conference (LABACE) by noting “remarkable growth” in the region’s bizjet market. The business jet manufacturer opened the conference by announcing its fleet in Latin America has grown by nearly 70 percent since 2009. The company has its in-production fleet — the Gulfstream G650, G550, G450, G280 and G150 — at the annual air show in Sao Paulo.

“I am very proud to say that one of every four business jets based in Latin America is a Gulfstream,” said Larry Flynn, president of Gulfstream. “That figure translates to nearly 180 aircraft. Five years ago, we had 105 aircraft here. Such remarkable growth, in a relatively short amount of time.”

Mexico has the largest Gulfstream fleet in Latin America, with nearly 80 aircraft based there, but Venezuela also has a notable fleet, with more than 30 Gulfstream aircraft currently in operation. The company’s popularity is also evident in Brazil, where the Gulfstream in-country fleet has nearly tripled, going from 14 to 40 aircraft over the last five years. Nearly half of the large-cabin business jets based in Latin America are manufactured by Gulfstream, including 30 percent of the large-cabin jets in Brazil.

The demand for Gulfstream aircraft in Latin America was the catalyst for establishing a company-owned maintenance facility in Sorocaba, Brazil, near São Paulo in June 2012. The service center is located at Bertram Luiz Leupolz Airport and supported operators during the recent FIFA World Cup in Brazil. 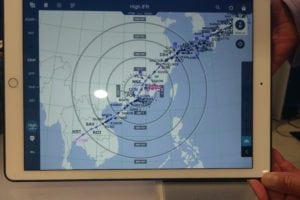