Automatic Dependent Surveillance–Broadcast (ADS-B) technology central to NextGen airspace management can enable Unmanned Aircraft Systems (UAS) to cue their ground operators or alter their own flight paths to avoid collisions. In April, the All Weather Sense and Avoid System (AWSAS) developed by R3 Engineering (R3E), of Lusby, Md., used ADS-B data to steer one Navy TigerShark UAS away from another over the Yuma Proving Ground in Arizona without operator intervention. The Naval Air Weapons Center Aircraft Division at Patuxent River, Md., plans a follow-on Cooperative Research and Engineering Development Agreement (CRADA) with R3E to further explore the benefits of AWSAS and re-broadcasting fused information via ADS-B links.

“The going-forward plan is to integrate radar target data into the computer that is in the box so that we can have non-cooperative or non-participating target data and avoid them the same as an ADS-B target,” said R3E Chief Technology Officer Richard Healing.

FAA will mandate ADS-B Out on most aircraft by 2020 to broadcast on-board information every second including altitude, aircraft number, and vertical air speed, and horizontal and vertical velocity relative to the ground. The GPS-accurate data will be used by ground controllers, and by other aircraft with ADS-B In capability either through 978 MHz Universal Access Transceivers (UAT) on aircraft below 18,000 ft or 1090ES MHz transponders above. On an unmanned platform, AWSAS collects three incoming ADS-B messages from the other aircraft to determine target track and define a protected zone shaped like a hockey puck. “The protected zone around that aircraft is determined by what it’s doing,” said Healing. “The zone around our aircraft is determined by what our aircraft is doing. The idea is not to let those two hockey pucks touch each other.”

The AWSAS demonstration computer tracks 24 simultaneous contacts. Avoidance algorithms divide each calculated conflict into two sequences. The first early-detection sequence tells a Ground Control Station (GCS) pilot what he needs to do to avoid the traffic. If the pilot commands the wrong maneuver or ignores the guidance, the second sequence commands the UAS autopilot directly to fly its own avoidance maneuver. In the Yuma demonstration, AWSAS waited 70 seconds to initiate the autonomous maneuver. “Up until that point, the system would tell the pilot on the ground to turn left or right,” says Healing. “The pilots never really give up control... The pilot can always override a maneuver initiated by the system.”

The AWSAS computer chooses from a library of separation maneuvers to avoid conflicting traffic without steering into new conflicts. R3 engineers programmed maneuvers tailored to different UAS missions. A 360-degree turn, for example, resolves the calculated conflict and returns a notional surveillance aircraft to its ground track. “You still need to come back and do 100 percent coverage,” said Healing. “You pick up the trail where you left it.”

Depending on programmed preferences, AWSAS could alternatively slow the unmanned aircraft down or speed it up, or turn left or right and later rejoin the flight path to its destination. Unlike the climb-or-descend advisories generated by the Traffic Alert and Collision Avoidance System (TCAS II), AWAS maneuvers avoid altitude changes. “They involve using gas,” notes Healing. “In addition to the separation of two aircraft, we want to keep the cost to a minimum.”

The ability to navigate unmanned aircraft through civil airspace shared with manned traffic has powerful implications for current government and potential commercial UAS users. Last year, General Atomics Aeronautical Systems Inc. (GA-ASI) and U.S. Customs and Border Protection flew a Guardian UAS with a BAE AN/DPX-7 IFF transponder including ADS-B In/Out capability plus standard transponder modes. ADS-B-Out performance was verified by the FAA Technical Center in Atlantic City, N.J. The same test demonstrated ADS-B In capability when 1090ES data was received by the transponder and re-sent to the ground station. The test did not include any encounters with cooperating ADS-B aircraft.

Since the 2012 flight tests, GA-ASI has made ADS-B capability part of the Guardian’s operational flight code. GA-ASI and FAA plan to fly a proof-of-concept Sense And Avoid (SAA) system next year on a Predator B integrating ADS-B 1090ES In/Out, a Due Regard Radar, and TCAS to verify ADS-B targets. “There is still a lot of work to do in order to say for sure what will be required for SAA, but I believe everyone in the community agrees that ADS-B will play a major role,” GA-ASI engineer Brandon Suarez acknowledges. “Even after 2020 when ADS-B-Out will be mandated in certain classes of airspace, there will be many airspace users that will not be equipped, and if a UAS wants to fly in those areas, it will need a way to detect those non-ADS-B aircraft.”

FAA acknowledges ADS-B may be useful to send and receive some of the surveillance information that a UAS could use to avoid collisions with other aircraft. However, FAA also cautions ADS-B alone is not likely to be sufficient. RTCA Special Committee 228 is developing minimum performance standards for Detect and Avoid systems and will consider the use of ADS-B. Separate from ADS-B functionality is the need to develop airworthiness standards that will allow Unmanned Aircraft Systems to earn standard Type Certificates and airworthiness certificates. In addition, FAA says current operating rules must be analyzed and updated to ensure UAS operations are predictable for air traffic controllers and other operators in U.S. National Airspace. Once updated, ADS-B rules and certification requirements will apply equally to manned and unmanned aircraft. Integration of the optional ADS-B In technology on the UAS would also give GCS operators the same weather and traffic information available to pilots of manned aircraft.

ADS-B and TCAS already provide Due Regard layers of protection on the big Navy MQ-4C Triton UAS, cuing the Air Vehicle Operator to maintain safe separation from civil aircraft. According to the Naval Air Systems Command, the current Triton does not include automated avoidance capability, but the system architecture is designed for growth. The Navy canceled the planned Triton Due Regard radar and is talking to Northrop Grumman about alternative SAA solutions. In contrast to the 32,000-pound MQ-4C, most Unmanned Air Vehicles impose tighter space, weight and power constraints than manned aircraft. The miniaturized AWSAS is designed for Department of Defense Group 2 and larger Unmanned Aircraft Systems. NAVAIR reports there are currently no funded plans to integrate ADS-B in the Navy’s Small Tactical UAS or the FireScout unmanned helicopter.

In 2009, the Office of Naval Research and the Defense Safety Oversight Council awarded an AWSAS development contract to R3 Engineering. R3E is a technology development company and called upon Appareo Systems in Fargo, N. D., to build AWSAS hardware.

“It was our design team that put the design together,” recalls Healing. “We put some software in and began downloading data.” In 2011, R3E began AWSAS tests in Florence, Ariz., on a large radio-controlled aircraft without an autopilot. “What we were doing their was testing our ability to send and receive a correct ADS-B signal from other aircraft.”

Follow-on AWSAS tests on a Piper Seminole from the University of North Dakota showed the dual-band AWSAS could identify 15 to 20 aircraft in the area.

“The ADS-B message is very robust; it has lots of information on it,” notes Healing. The AWSAS box weighs less than 1 pound but records its own position, altitude, and courses, and data from other contacts. All information can be downloaded for analysis. AWSAS also stores terrain data; locations of wires, towers and tall buildings; and virtual obstacles including no-fly zones. Initial avoidance maneuver tests with AWSAS in Newfoundland on a research UAS in 2012 showed the system could command an autopilot to change flight path.

The Naval Air Systems Command (NAVAIR) tasked R3E to integrate the system on the Group 3 TigerShark UAS made by Navmar Applied Sciences Corp. in Warminster, Pa. The NAVAIR Special Surveillance Program office rushed the 400-pound Tiger Shark to combat theaters in 2006, and later versions continue to fly in Afghanistan. Initial AWSAS tests on the TigerShark in 2012 confirmed the sense-and-avoid box could command avoidance maneuvers through the Piccolo autopilot. The Piccolo from Cloud Cap Technology in Hood River, Ore., (now part of UTC Aerospace Systems) is used on a range of unmanned aircraft and designed to interface with UAS payloads and other external devices.

Tests with two TigerSharks at Yuma Proving Ground in December 2012 began with the AWSAS “avoider” aircraft on the ground towed up and down the runway while the ADS-B-Out “intruder” flew overhead at various intersecting angles transmitting on 978 MHz. The Piccolo autopilot in the ground aircraft deflected control surfaces to show how it would respond to an ADS-B participating target on a collision course.

TigerShark GCS operators quickly learned to fly intercept profiles in simulations, but real collision courses posed unacceptable risks to the expensive unmanned aircraft. “Pilots normally fly them like Golden Eggs,” said Healing. “We were asking these guys to put these two different aircraft into a deliberate intersection point at same time.” He explains, “Tests in the air were very effective, but for safety and sanity, we maintained 1,000 feet vertical separation.”

The two UAS pilots programmed courses, speeds and altitudes, then hand-flew their TigerSharks to starting point tracks. Once the test pilots initiated their programs, the TigerShark autopilots flew the programmed paths. With the altitude component of the track disabled, the AWSAS “avoider” calculated an impending collision and warned the operator 70 seconds from intersection. Without pilot intervention, AWSAS triggered a 2- or 3-minute circular turn left or right to let the conflict traffic pass and returned the “avoider” to the turn starting point. Five days of successful tests included 140 intersections, including one instance where the “avoider” pilot, doubting the autopilot, seized control of the maneuvering aircraft and proved GCS operators still had complete authority over their UAS.

Subject to Navy approval, NAVAIR reports the follow-on CRADA will integrate AWSAS into the NAWCAD AIR-5.4 Unmanned Aircraft System Integration Lab (UASIL) at Patuxent River. The UASIL simulator environment can be stimulated by either live or recorded flight tracks supplied by the Atlantic Test Range. The Range Data Distribution System will tap highly accurate radars and other sensors to provide virtual non-cooperative targets in simulated airspace.

Ground-Based Sense And Avoid (GBSAA) simulations would lead to test flights with AWSAS on a piloted aircraft likely in 2014. The test system fusing ADS-B and GBSAA data would generate avoidance recommendations to be followed or disregarded by the pilot. Manned test flights could lead to an SAA sensor integrated with AWSAS on an unmanned aircraft. Radar is a more appealing ADS-B adjunct than infrared or electro-optical sensors. “This is basically good in almost all weather conditions that are flyable,” said Healing. “We are ordering a small radar to be installed on a TigerShark UAV. Actually, it’s a real, cool idea because the radar is quite small and lightweight the whole weight of the system is about 10 pounds. If we can successfully detect and track non-cooperative targets, whatever they may be, we can translate the radar output into ADS-B format.” He adds, “ADS-B is going to make a difference. There are efforts underway to make sure that we are not vulnerable to spoofing the GPS.”

R3E designed AWSAS with an open architecture and can provide Interface Control Documents to tie the system to different unmanned platforms, autopilots, and avoidance software. Around 30 systems are being tested by NAVAIR, the ONR, and Memorial University of Newfoundland. “The idea is if this becomes a certified design or capability, we’d license it to others to use it,” says Healing. 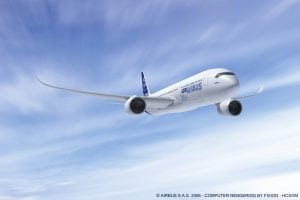 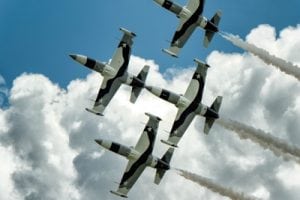