During the test, which was conducted at the former Naval Base in Argentia, Newfoundland, on Aug. 10, R³’s All Weather Sense and Avoid System (AWSAS) installed on a research UAS, with no external command or control inputs, commanded the UAS’s auto-pilot to depart from its programmed flight path, execute an internally computed maneuver to avoid a potential collision, and then return to the original planned flight path when well clear of the intruder.

ADS-B messages received and processed by the AWSAS’ internal computer indicated the aircraft was on a collision course with another ADS-B-equipped target. The AWSAS’ embedded Sense And Avoid (SAA) algorithm analyzed the flight tracking data; determined that a potential breach of the aircraft’s “collision volume” was imminent; determined an optimum collision avoidance maneuver; and sent commands directly to the autopilot, the company said. The UAS’s auto-pilot responded to the commands, turning the aircraft away from the intruder; and, when clear of the conflict, returned the aircraft to its preprogrammed flight path. This entire sequence was autonomous, with no command or control inputs from outside the unmanned aircraft.

The flight test series is scheduled to expand with testing later this year in Restricted Airspace that will incorporate non-cooperative target data from sensors such as radar and EO/IR into the AWSAS’ SAA process. 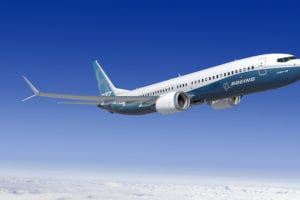