The WAASS sensor –– consisting of a wide area imager called “Kestrel” and a spotter camera for close-up images –– was tested by the DHS Science and Technology Directorate (S&T), and was created in partnership with DHS’s U.S. Customs and Border Protection (CBP) to assess the operational value of WAASS technology toward strengthening U.S. border security. This system was studied for its ability to detect, identify and track illegal activity along the southwest border.

Mounted on a Raven Aerostar aerostat, the Logos Technologies’ ‘Kestrel’ sensor — working in tandem with a Wescam imager to scan city-sized areas — was operated by U.S. Customs and Border Protection (CBP) Agents, assisted in identifying more than 100 illegal attempted entries and alleged illicit activities in progress along the surveyed area over the course of the one week trial period.

“The U.S. Border Patrol must adopt new technologies rapidly identify cross border threats so resources can be deployed appropriately,” said Nogales Border Patrol Station Patrol Agent in Charge, Leslie Lawson. “Integrating new technology into our mission is an essential part of managing risk on the border. The Border Patrol is open to new methods that will assist in leveraging our border enforcement efforts.”

“Wide-area imagery has potential in DHS applications. With the technology showcased here, we were able to see activities happening in different parts of the city at the same time,” said Dr. John Appleby, Program Manager, DHS S&T’s Borders and Maritime Security Division. “We could increase situational awareness in the field and the quality of operational responsiveness, all the while maintaining the ability to re-wind imagery for forensic analysis and assess the constant-state capability provided by an aerostat platform.”

DHS S&T will continue a series of similar tests to identify other candidate systems, including other platforms and sensors, to verify performance and provide tailored recommendations regarding system acquisition. Candidate systems will also be screened for potential application to disaster relief and emergency management situations. 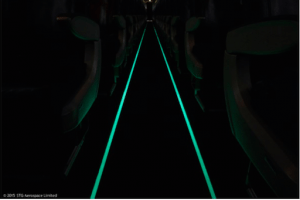 Icelandair to Equip with STG Lighting