Cassidian, an EADS subsidiary based in Germany, said its LTR 400 family of transponders received EASA certification. The company said the equipment, which is suitable for the identification of military aircraft as well as for use in civil air traffic control, is thus among the first in Europe to achieve this platform-independent approval.

“This approval to an especially standardized procedure improves access to the worldwide market for our identification systems. We are thus helping to optimise safety in civil and military air traffic,” said Bernd Wenzler, CEO of Cassidian Electronics. “It saves platform manufacturers the costs and risks of specific approvals for different types of aircraft.”

The LTR 400 can be used for both civilian air traffic control and military applications to identify friendly units. This unit operates to the latest civilian air traffic control standard, Mode S “Enhanced Surveillance”. The LTR 400-A is particularly suitable for use on board helicopters and unmanned aerial vehicles, according to the company. This equipment has already been ordered to equip Eurocopter’s EC 635 helicopter. 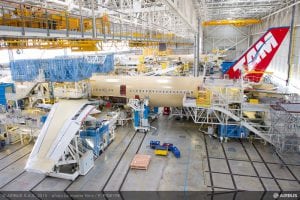 TAM’s First A350 XWB One Step Closer to Delivery