The proliferation of requirements to monitor unsafe conditions, and to monitor engine performance and aircraft fuel efficiencies are driving demand for new data acquisition systems within civil and military aviation.

To satisfy these requests, manufacturers have developed equipment to monitor hard landing events so that fleets of fractionally owned aircraft can be safely and cost effectively monitored for potentially damaging landings. They have also delivered data recorders with integrated quick access recorders (QAR) and health usage monitoring systems that record key maintenance parameters and identify required maintenance rather than relying on periodic checks and inspections.

Recent high-profile crashes, including the loss of an Air France Airbus A330 in June that crashed en route from Brazil to France, make these capabilities even more vital to airlines. Developers of these systems face challenges, including collecting, storing and analyzing the data, in addition to the ever-present push for equipment to be smaller, lighter, less expensive and easier to install and operate.

In July, Airbus launched a study for reinforcing flight data recovery, including extended data transmission for commercial airliners, so that in the event of accidents, critical flight information can still be recovered. "We will now study different options for viable commercial solutions, including those where our experience with real-time data transmission from our own test aircraft could support the further development of such solutions," said Tom Enders, president and CEO of Airbus.

"This creates the need to include a broader range of interfaces, driving up cost and complexity in a market that demands lower prices and more simplicity in avionic integration," said Schmutz.

Technologies such as wireless- and IP-based data collection methods are being examined as ways to reduce the staff effort necessary to collect aircraft data. IP-based equipment with integrated Web servers provide simple point-and-click configuration, diagnostic and download capabilities. These systems also help operators more easily configure their data collection equipment themselves for the various aircraft in their fleets.

"The challenge is matching the requirements of customers with technology that is equally as good as they’re used to, but to raise that bar," said Patrick Cassaday, executive vice president of KineticSystems of Lockport, Ill. KineticSystems designs and manufactures PXI, cPCI, VXI and CAMAC data acquisition products and services.

"Sometimes the trick is to introduce a product with enough interfaces to be useful to the industry, but to still be compact, cost effective and useful," said Schmutz. L-3 has a Micro QAR, a 6-ounce recorder designed for use in commercial and military aircraft with solid state flight recording systems. It records multiple ARINC 429 and ARINC 573/717 inputs with USB or Ethernet interfaces.

"As a result, we continue to expand the capabilities of these equipment types to handle different and more complex aircraft interfaces, and in many cases we can configure various existing acquisition cards to satisfy a customer need without detailed development," he said.

For the future, Schmutz sees a diminishing need for dedicated QAR as mandated flight recorders become capable of providing much larger data stores and offer wireless download capabilities. Another solution designed to lessen the burdens associated with data acquisition is the use of portable systems that aren’t mounted in the airplane but are instead carried on and off as needed.

"If you don’t have to have flight-certified equipment with all the safety related requirements, then you can have a person carry the equipment aboard, operate the equipment and connect to the data that needs to be recorded," said Rodger Hosking, co-founder and vice president of Pentek, based in Upper Saddle River, N.J. "During flight, he might be capturing data for short-term use related to qualification of a new radar or communications system."

Hosking said it is his experience that certain military customers are willing to consider that type of temporary requirement if it saves money and/or saves time.

"We are talking with customers who work in a traditional, by-the-book mode, and also customers who are trying to be clever about getting the job done when there is a need for a temporary, short-term, qualification-type test where the equipment is simply recording data from the hardware that is being tested," he said.

Because of certain advantages that solid-state recording devices have over magnetic devices, and the industry is inexorably moving in a direction away from rotating platters of magnetic material and toward solid state drives (SSD). The main advantage of SSD is they have no moving parts and are therefore less susceptible to vibration and shock as compared to magnetic devices. "Drives do represent the long pole in the tent for airborne applications because of their sensitivity to vibration and shock," Hosking said.

At this point, SSDs have data capacities only one-third to one-half that of magnetic media. The other factor limiting the industry’s widespread use of SSD technology is the number of read-write cycles possible with the technology.

"There is definitely a concern for the number of read-write cycles that solid state drives can endure because the silicon device wears out," said Hosking. "Solid state devices are 10 to 100 times poorer than a magnetic drive."

Depending on the application, though, the paucity of read-write capability may not be a problem.

"If I’m only going to fly 50 missions over two years in a UAV or a missile, then that number won’t be an issue," Hosking said. "But if you’re using it to collect data from an operating system on an airborne computer then you might find the use of solid state disks would be inappropriate."

Clearly, there are roles for both magnetic and solid states devices in today’s data acquisition environment. Both could be used simultaneously depending on the tasks they are given.

"There are two different disk environments: one for the operating system, which gets thrashed hard, and a Drive B where you keep the data," said Hosking. "Those files are not accessed as often or as hard, so solid state drives could be a good choice for recording."

Pentek is expanding its line of RTS real-time data recording and playback systems with a new product dubbed RTS 27XX, which has an architecture that combines both solid-state and magnetic media in a rack-mounted system.

Industry observers expect solid-state recording media will eventually become the drive of choice for all aerospace applications in the not-too-distant future. The industry is waiting for the commercial electronics market to solve the problems for it. Just like avionics manufacturers now depend on the electronics industry for the latest advances in displays, so too are companies that design data acquisition hardware depending on manufacturers like Hitachi, Samsung and Transcend to come up with next-generation SSD solutions.

Over the last six months, both Apple and Dell started to offer optional SSD for the computers, and SSD technology is particularly attractive for devices like portable digital assistants.

"People want small PDAs and computers to be robust enough to be dropped and withstand vibration," said Hosking. "They do offer some nice benefits for portable applications."

One of the technologies that SSD manufacturers have developed to address the read-write issue is called "wear leveling," a software application that permits the recording of data across the entire drive rather than writing over files already in place.

"For an ISR application, manned or unmanned, an air vehicle will fly over a region and survey every radio transmission in that region," Hosking said. "With the explosion of cell phone technology there is a tremendous amount of data to be recorded, and it won’t be getting any less with broadband wireless.

"There is a driving need for these types of recording products, especially those with a small form factor for UAVs," said Hosking. He said Pentek plans to introduce in 2010 a portable system that includes a 2 ½-inch notebook-sized drive.

"Customers want higher bandwidth, more channels, lower cost. As technology gets better, we will deliver those things and coupled with solid state drives we will eventually get densities of 2 terabytes on a 3 ½-inch drive. We’ll be able to pack a lot of storage in a small place."

Avionics Magazine’s Product Focus is a monthly feature that examines some of the latest trends in different market segments of the avionics industry. It does not represent a comprehensive survey of all companies and products in these markets

Following are some recent developments announced by manufacturers and suppliers of data acquisition systems.

* ACRA Control, based in Hollywood, Md., in June released KAD/ADC/126 and SSR/ADC/126 wideband analog modules (photo, right). The company said these four-channel analog to digital converter modules extend the reach of the company’s data acquisition and mission recorder analog bandwidth up to 25 KHz. ACRA Control’s product line also includes KAM-500, an airborne digital data acquisition system made up of one or more chassis and an array of acquisition and output modules.

* FLYHT AeroMechanical Services, of Calgary, Canada, in June said it completed testing upgrades to its Automated Flight Information Reporting System (afirs), allowing the "smart" black box to continuously stream GPS position and aircraft parameter from the aircraft to the ground.
The system provides an automated link between onboard avionics including GPS and the FDR, the Iridium satellite network and a ground-based Web server that automatically routes messages to any designated recipient within seconds.
"This capability is not only valuable in improving responses to in-flight issues, but in the rare case where an aircraft goes down, this data stream can provide immediate insight into the exact flight path and possible cause of the accident," said Richard Hayden, president of FLYHT AMS.
The company said the system is certified by Transport Canada, FAA, EASA, and CAAC (China) for use on more than 30 aircraft models. Currently, 31 operators in six continents have contracted for afirs.

* Curtiss-Wright Controls in May was awarded a $22 million contract by Sikorsky Aircraft to develop and supply the data concentrator units (DCU) for the CH-53K heavy-lift helicopter under development by the U.S. Marine Corps.
The system consists of two DCUs that will receive and provide various avionic and air vehicle discrete, digital and analog inputs for monitoring, passing through data and controlling various CH-53K subsystem components. 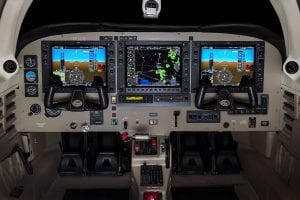