Rusty Roberts was named director of the Georgia Tech Research Institute (GTRI) Aerospace, Transportation and Advanced Systems (ATAS) laboratory. The laboratory is one of two units based at the Cobb County Research Facility near Dobbins Air Reserve Base.

The appointment followed eight years of service by Roberts as associate director for business development in GTRI’s Information Technology and Telecommunications Laboratory, 12 years as program manager in the Systems Development Laboratory that was merged to create ATAS, and 10 years as an officer in the U.S. Army Signal Corps.

Roberts is vice president and executive committee member of the International Test and Evaluation Association. He started and now leads a GTRI-wide test and evaluation initiative that brought together the Joint Systems Integration Command and the Defense Test Resource Management Center.

He has worked with U.S. government officials to establish requirements for testing of electronic countermeasures against surface-to-air missile threats and has been able to provide solutions developed by GTRI.

Wysong most recently served as vice president of Engineering, Materials and Planning at United Airlines, where he led engineering, supply chain and fleet management operations for the carrier and oversaw 600 employees.

Previously, he served as vice president of Strategic Planning and Budgets for United’s technical division, based at San Francisco International Airport. Wysong also held the position of vice president of Revenue Management at United’s Chicago headquarters.

Prior to joining Elbit Systems of America, Carter served in a number of high-level positions in the White House, the U.S. Senate and the Department of Defense. He is a former Deputy Assistant Secretary of Defense, Legislative Affairs, and former senior counselor to the Coalition Provisional Authority for Legislative Affairs in Baghdad.

Most recently, Carter was president of Commonwealth Consulting Corp. He is a major general in the U.S. Air Force Reserve, with 10,000 hours as a military and civilian pilot.

Michael O. Hulley was named CEO and president of Navtech Inc., of Waterloo, Ontario. He also joined the company’s board of directors.

Hulley came to Navtech from Tata Consultancy Services, where he was a senior partner responsible for expanding the travel, transportation and hospitality sectors of the business. Prior to this position, he was CEO of LeisureLogix, where he led the company through its product launch.

Navtech’s products include aeronautical charts, navigation data solutions, flight planning, aircraft performance software and crew planning solutions. Many of its products can be configured as part of an electronic flight bag solution.

He is responsible for developing and implementing corporate business strategies and partnerships for the North and South American aviation markets, as well as providing cross-business divisional leadership and support for "high impact" projects.

AD Aerospace, Cheshire, U.K., appointed Rob Nash as its new Business Development Manager for the EMEA region. He will support new and existing customers in Europe, the Middle East and Africa with the "FlightVu" line of aerospace video camera systems.

FlightVu equipment is STC’d on a range of commercial airliners and is available as buyer furnished equipment on Boeing production aircraft.

AD Aerospace also named Shoukry Shokralla regional sales representative for the Middle East and North Africa, to be based in the United Arab Emirates.

Phil Boyer, former president of the Aircraft Owners and Pilots Association (AOPA), joined the board of directors of Aspen Avionics, based in Albuquerque, N.M.

Boyer served 18 years as president of AOPA, a not-for-profit organization representing 400,000 aircraft owners and pilots. He is Aspen’s first outside director, joining six investors and company executives on the board.

As a director, Boyer will help guide the company through its next stages of growth.

Crane Aerospace & Electronics, Lynnwood, Wash., announced the appointment of Ron Kato as vice president of Global Sourcing and Manufacturing. (A photo of Kato was misplaced in the March 2009 issue. — Ed.)

Kato is responsible for operations and strategic sourcing for the company’s Aerospace Group sites in Lynnwood, Burbank, Calif.; Elyria, Ohio; and Lyon, France.

Kato joined Crane Aerospace & Electronics in 1997 as Northwest Regional Business Manager for Hydro-Aire. He most recently was vice president and general manager of Crane’s Burbank site.

Jones joined Crane in 1984 as a market analyst for ELDEC, one of the companies that comprise Crane Aerospace & Electronics. He most recently served as vice president of the Sensing & Utility Systems business for the Aerospace Group.

A 10-year employee of Electronic Cable Specialists, Beutel will support TrueNorth dealers in the Midwestern United States, where he will be responsible for promoting the company’s executive-class Simphone airborne telecom systems and forthcoming Simphone Global Broadband system to dealers, completion centers, OEMs and aircraft operators.

Olivier Blain was appointed vice president of Corporate Communication with Eurocopter, reporting to CEO Lutz Bertling. He succeeds Laurence Rigolini, who is taking over new management responsibilities as vice president within the subsidiaries and participation directorate of Eurocopter.

Blain, 44, has served in several senior positions in public affairs and corporate communications with major international companies such as Intel, Hewlett Packard, Schneider Electric and British American Tobacco. He most recently served as vice president and director of Public Affairs, Communications and Corporate Social Responsibility for Coca-Cola Enterprise

Last December, the EADS board of directors decided to integrate the Military Transport Aircraft Division with Airbus, and to create Airbus Military in charge of all military transport aircraft. The new entity will manage the reorganized A400M program, the Airbus aircraft derivatives market, and the light and medium transport aircraft segment.

Ureña-Raso is a technical aeronautical engineer, graduated from Madrid University and Paris ESSEC business school. He has headed major programs, including the FLA (later A400M), serving as chief procurement officer. He was appointed head of industrial strategy of Airbus in 2006 and has headed the company’s Power 8 restructuring program.

Edwards previously was a systems engineering manager and technical program manager for EFW Inc., an electronics supplier to the defense industry. He also served as group project engineer for Nissan Research and Development.

Prior to joining StandardAero, Kelley managed marketing and communications functions for corporations including Raytheon Missile Systems and Health Net of Arizona.

StandardAero appointed Mary Ellen Keegan to the position of vice president, Contracts, based at its Component Services facility in Cincinnati, Ohio. She is responsible for legal support of all contract activity, including negotiation and review of sales, purchase, and lease agreements for the business sectors.

Prior to joining the company, Keegan served as counsel for financial transactions to GE Engine Services in Cincinnati.

Brunson has 35 years of management experience with L-3, Loral and its heritage companies. In 2007, he was named senior vice president of corporate strategy and development. Prior to that, he was president of L-3 Communication Systems-West in Salt Lake City. 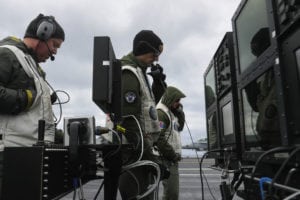 Cover Story: ADS-B On The Ground