Dow-Key Microwave, Ventura, Calif., has released its 3-GHz bypass switch. The panel-mounted switch can be used to bypass low noise amplifiers or filters in the event of a failure. Visit www.dowkey.com.

Digitran, Rancho Cucamonga, Calif., has introduced a line of miniature rotary switches for helicopter flightdecks and electronic instrumentation. The 67 series of switches has a low post-panel depth and fewer internal components. Visit www.digitran-switches.com.

Smartsoft, of Bodoe, Norway, has released two new versions of its weight and balance software for mobile phones. Flight WTK 2.0 and Flight WTK Lite allow users to perform these calculations on a mobile phone in as little as 40 seconds, Smartsoft says. Visit www.smartsoft.no.

NavAero of Chicago has introduced an integrated, Class 2 electronic flight bag (EFB) for commercial, corporate and general aviation, priced at less than $5,000. The new t-Bag C22 EFB features a 1.6-GHz Intel Pentium M processor, which outpaces Class 2 competitors, the company claims. The central processing unit (CPU) also features a 40-Gbyte hard drive, a 512- Mbyte memory and 2 Mbytes of cache memory. The CPU is sealed and passively cooled, so there are no moving parts within the unit that could lead to failure.

The t-Bag C22 also incorporates navAero's t-Pad display, which comes with a standard 8.4-inch active matrix liquid crystal display (AMLCD) color screen with 600-by-600 pixel resolution. An optional 10.4-inch AMLCD display with 768-by-1024 pixel resolution also is available. Both screens are touch-sensitive for inputting commands and include brightness control and an on/off buttons on the front of the unit. They are sunlight-readable for cockpit use and dimmable for nighttime flying.

Geotest-Marvin Test Systems Inc., Irvine, Calif., has announced its line of 3U PCI universal time interval counters, the GC22x0 series. The GC2210 measures frequencies up to 225 MHz, the GC2220 measures up to 1.3 GHz, and the GC2230 measures up to 2 GHz. All counters in the series have an internal clock source and support an external reference source. The GC22x0 series can be used to measure frequency and time intervals, and can be used with automatic test equipment systems. Visit www.geotestinc.com.

AIM GmbH, Freiburg, Germany, has introduced a monitor tap for avionics developers and airline operators that uses avionics full-duplex switched Ethernet (AFDX) and ARINC 664 networks. The fdXTap connects to a personal computer through a USB 2.0 interface and can be used to tap into AFDX and ARINC 664 networks to monitor the traffic between end-systems and switches. The small box contains two bus interface units that run 600-MHz Xscale processors and an IRIG-B time code generator/decoder. Visit www.aim-online.com.

From VXI Technology, Irvine, Calif., comes a new high-voltage digital input/output (I/O) module, the VT1802. The single-slot VXIbus module provides 120 single-ended or 60 differential channels that can be defined as inputs or outputs by the user. The output groups can be programmed to 28-volt or 73-volt levels. The company claims that the VT1802 is the ideal module for multiple-channel I/O applications that need to source up to 140 milliamps per channel and that it exceeds the capabilities of any other I/O solution on the market. Visit www.vxitech.com.

Radstone Embedded Computing has announced two upgrades to its GBX16 managed Gigabit Ethernet switch. It now incorporates, as standard, Internet protocol version 6 (IPv6) and is available with a rugged, 12-port optical expansion board (OXB) as a build option. IPv6 capability, which replaces the currently used IPv4, is obtained through a software upgrade that expands available IP address space (128-bit addressing) and allows the switch to classify and use IPv6 packets. The OXB was added to provide additional support for long-distance and electrically noisy networking applications. The updated GBX16 is the first fully rugged, fully optical and fully managed Gigabit Ethernet switch, Radstone claims. Visit www.radstone.com.

AirCell has added automated flight tracking capability to its airborne telecommunications systems. Once an AirCell satellite tranceiver and lightweight tracking controller are installed in the aircraft, users on the ground can track the position of the flight in real time, using AirCell's Flight Explorer software on any Internet-enabled PC. Tracking is accomplished through the use of AirCell's Iridium-based satcom systems, which allow the planes to be monitored anywhere in the world. The aircraft's GPS position is automatically transmitted through the satellite network at intervals selected by the user. Visit www.aircell.com.

Wencor, Springville, Utah, has unveiled an in-flight entertainment (IFE) system. The digEsystem will offer airline passengers a variety of in-seat entertainment options, including audio and video on demand. The IFE system is one-third the weight of a traditional installation and consumes one-third of the power. It features an 8-inch liquid crystal display (LCD) with touchscreen sensitivity to allow users to navigate content options. The digEsystem also comes with a 60-Gbyte hard drive and an 802.11a wireless network for content updates. The front of the unit provides a credit card reader for payment and a USB 2.0 port for optional use of keyboards, memory sticks or control devices for games. Visit www.wencor.com. 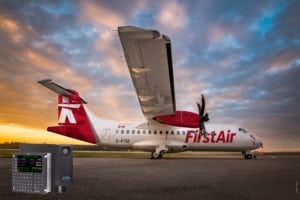 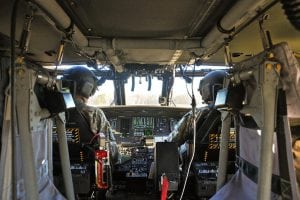 Last Week in US Defense Photos