[Avionics Today 07-02-2015] During a symposium at the European Parliament, "Disappeared Aircraft in a Connected World: Urgent Call to Action," members of the European Parliament (MEPs) called for action by the International Telecommunication Union (ITU). European Union (EU) stakeholders were asked during the symposium to remove regulatory barriers to the deployment of satellite-based flight tracking to help improve safety and surveillance of flight operations in remote areas.

While recalling the disappearance from radar of Malaysian Airlines flight MH370, which shifted the aviation industry's focus toward expanding aircraft tracking, MEPs discussed an issue that the industry will be focused on in November at the 2015 World Radiocommunication Conference. According to a statement released by the European Parliament, that issue is the guarantee to aviation of radio spectrum to support satellite-based flight tracking. At the conference in November, the 191 member states of the ITU will review global allocations of radio spectrum, including the 1090 MHz frequency band that the aviation industry would need in order to facilitate the type of satellite-based aircraft tracking capability discussed during the Parliament's symposium on June 30.

At the symposium, MEP and parliament’s rapporteur of the Single European Sky II+, Marian-Jean Marinescu, alongside several colleagues, released a draft text of a resolution to the European Parliament, urging member states of the European Union to support the required ITU "treaty modification" necessary to allocate spectrum, protecting the satellite-based tracking network from interference. In resolution’s draft text, the European Parliament calls on the European Commission and Council to "ensure the European Union and its member states support the required treaty modification in November 2015," as a result of officials "observing that ground-based solutions cover less than 30 percent of the globe, and a planned satellite-based solution will enable global coverage."

In February, Brennan's IAA signed an agreement with Aireon to manage their global emergency air tracking service, Aircraft Locating and Emergency Response Tracking (ALERT), which will be provided as a public service to ANSPs across the globe beginning in 2017 when Aireon's space-based ADS-B network becomes operational. Aireon CEO Don Thoma told Avionics Magazine he was encouraged to hear European officials pushing to support the type of capability Aireon is looking to provide when its space-based ADS-B network becomes available in 2017.

"The specific issue were working here is that the 1090 MHz frequency band is already allocated a special priority that is associated with providing safety of life services," said Thoma.

"1090 is used for a number of different things, including secondary radar for ADS-B on the ground basis and when those allocations were made many years ago, they were never anticipating a space-based system being put in place. The allocations as they were made within the International Telecommunications Union spectrum tables protects it for aircraft to ground communications, transmission of signals from aircraft to the ground, from the ground to the aircraft and between two aircraft. It was never, at the time, anticipated to have a space-based system so they never protected it or put the allocations in for it,” Thoma added

“One of the key actions under way between the aviation communication and radio spectrum community has been to extend that protection from the current allocation to space. And considering that space-based ADS-B is a receive-only system, it’s a minor issue, there’s really no technical concerns on that," he said.

While the radio spectrum issue will ultimately be voted on in November, during the last World Radiocommunication Conference in 2012, the International Air Transportation Association (IATA) released a position paper that effectively supported exactly what the members of the European Parliament expressed support for during the symposium yesterday.

"Airspace is becoming more complex and the demand for frequency assignments and hence spectrum allocations is increasing. Whilst some of this demand can be met through the improved spectral efficiency of new radio systems, it is inevitable that existing allocations may need to be broadened or additional aviation spectrum allocations sought to meet this demand," IATA stated in its 2012 position paper.

ITU sets the agenda for the World Radiocommunication Conference three years in advance however, and as Thoma mentioned, during the previous conference the member states had not anticipated the availability of a space-based ADS-B system. 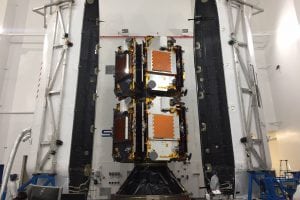