[Avionics Today 05-29-2015] African aviation has, for years, been plagued with a lack of infrastructure, an insufficient aviation safety culture, and disease- and conflict-related restrictions on airspace that limit travel routes. Rady Fahmy, executive director of the African Business Aviation Association (AfBAA), feels many of those views are outdated, however, and hopes a new study by the two-year-old organization will change perceptions and encourage investment in biz av across the continent.

“Africa has changed immensely over the last decade and there are very few areas now where it is unsafe to fly. There’s an outdated view of what Africa is, full of conflicts and wars; that is the old Africa,” said Fahmy.

But the continent still faces significant challenges in terms of infrastructure, including a lack of Fixed-Based Operators (FBOs), Maintenance, Repair and Overhaul Facilities (MROs), and Air Traffic Control (ATC) facilities. Safety and cost issues, such as insufficient funds for aircraft financing and high airspace and airport fees, are also preventing immediate growth. Fahmy is hoping, however, that the AfBAA can work with operators and both international and local authorities to bolster Africa’s business aviation community.

“The first rule of business, if you are going to represent this business, and if operators and buyers are going to invest in this continent, then the first thing they need is a reliable source of information about what exists and what will exist in terms of sentiments,” said Fahmy, noting that this centralized database of information is missing in Africa. “Africa, unlike other continents, lacks a unified organization such as the FAA or Eurocontrol that has data of what exists. There are bits and pieces everywhere, but it is incomplete — there are areas that are completely dark and we don’t know what’s going on.”

Working in close collaboration with Jetnet iQ, AfBAA set out to collect this singular set of data through research that analyzed the continent’s economic growth, the current business aviation fleet size and makeup and, for the first time, compiled information regarding what routes the aircraft were flying. The researchers also collected information through surveys distributed to operators, MRO facilities, fueling services, aircraft financing corporations, and all other areas of industry that make up the aviation ecosystem.

“We understand that Africa lacks many of the advancements of infrastructure —infrastructure meaning legal, software, air traffic control, airports, everything,” said Fahmy. But with an economy that is projected to grow at a rate of 5.1 percent Gross Domestic Product (GDP) over the next 10 years, according to the 2014 IMF Economic Outlook Database, it’s likely that business aviation will pick up right alongside it.

“The expected utilization of the aircraft in the current fleet is going to be higher,” said Fahmy, pointing to the survey, which reflects that the aviation industry expressed a “pessimistic” view near term but an optimistic one just two years out. “That gives us telltale signs that things are moving positively,” he added.

The report also turned up proof that the concentration per aircraft for High-Net-Worth Individuals (HNWIs) was similar to that of North America, although in much smaller numbers, of course.

The AfBAA also conducted the first research related to flight routes in the continent to track where business operators were flying and found that well over the majority of aircraft are flying internally.

“This is the first time that we understand that 72 percent of flights land back in Africa. This is also a very telling sign for manufacturers, operators and it’s a very helpful indication of what aircraft are required for Africa,” said Fahmy. The high concentration of internal flights also means that the area has the potential to spurn more commercial aviation as well, according to the AfBAA director.

Before the industry can pick up dramatically, however, there are still plenty of issues authorities within the African Union have to address. Safety culture being the largest concern operators reported in the survey.

“With the exception of the older aviation countries I would say that safety culture is one of the toughest and most important issues that we are working on,” said Fahmy, noting that countries with long standing aviation traditions, such as Egypt, have infrastructure and safety regulations well in place. He stresses a closer relationship between the African Union and local aviation authorities to close the security gap and insists that the continent can’t simply take a “broad-strokes” approach to setting regulation in countries within the continent.

“Safety, as we understand, is a culture, it’s not just about the regulations; you have to work on a culture to start with and to do that you need the standards from an international perspective, but you have to work with the local civil aviation authorities and the local solutions and find out what’s the best solution for that area,” he explained.

Aging aircraft also pose a problem for business aviation operators across the continent. The study turned up 507 business jets and 829 turboprops, totaling 1,336 aircraft across the entire continent, although Fahmy notes that without a centralized system it’s hard to call the number exact. And with the average age of aircraft in the fleet sits at 19-and-a-half years, new aircraft will have to begin coming in to revitalize the fleet.

Despite these issues, the AfBAA is confident the country will see positive growth going forward, although growth in the short term may be stalled by falling oil and gas prices. In the long term, however, Fahmy believes the report is the first step in fostering growth across the continent.

“If you look out toward five to 10 years, we see plenty of growth and not only in the business aviation fleet but also in all supporting industries. You’ll see more MRO’s being present, spare parts and depots being put in Africa, we’ll see more professionals being employed. It’s going to hit on several positive points,” said Fahmy. “The time to invest in Africa is now.” 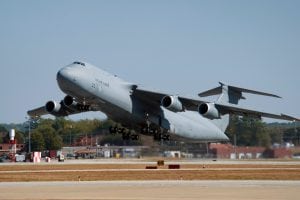