ATG vs. Satellite: Gogo CEO Speaks to the Future of Connectivity

[Avionics Today 12-12-2014] Gogo’s success with its Air-to-Ground (ATG) network hasn’t convinced the company to stay safely in this comfort zone; instead, it has prompted the in-flight Internet service provider to expand to satellite. This was the sentiment CEO Michael Small shared with investors at the UBS Global Media and Communications Conference earlier this week. Small believes ATG just isn’t cutting it anymore, despite hundreds of upgrade contracts for its three-times-faster ATG-4 service, and the announcement that Gogo will provide its ATG network to an estimated 250 American Airlines regional jets.

“An air-to-ground solution by itself is no longer competitive,” Small said, continuing on to address the evolution of the In-Flight Connectivity (IFC) market as it progresses to be an ever more global industry. “It used to be that regional coverage was competitive in the wireless business on the ground and then all of a sudden it had to be national coverage. Even with the U.S. fleet, they fly to the Caribbean, they fly to Hawaii, they fly to Mexico. If connectivity is transformative to aviation you can’t afford to have it most of the time; you have to have it all of the time. So a high percentage of planes will be satellite.”

While Gogo’s ATG network led to much of the company’s success — it has now won contracts to provide connectivity to about two-thirds of the North American fleet —satellite can offer the constant connectivity that ATG can’t guarantee. The company is backing up its desire to move to satellite by focusing its forthcoming efforts on developing and promoting the upcoming 2Ku offering, which it believes can deliver both faster and more reliable connectivity when it becomes available in 2016.

“Going from 3 [mbps] to 10 [mbps], that’s a tripling. In jet engine standards that would be astounding,” said Small, speaking to the recent upgrades Gogo is providing through its ATG-4 network offering. “But we need to go a lot further than that so we are actively working on 2Ku … We have the path to 100 mbps with satellite with 2Ku. We are actively now figuring out how to get those same kinds of speeds with an air-to-ground solution.” Gogo has received FAA certification to install its Ku-band satellite equipment on Delta Airlines Boeing 777-200ER aircraft just last month, with installations on Delta’s fleet already slated for completion in 2016.

But Gogo’s satellite sentiments are something of an outlier. Earlier this year, Inmarsat’s President of Aviation Leo Mondale said the satellite company sees ATG as the future of connectivity in Europe.

“There’s just no comparison,” Mondale told investors at a conference in September. “When you start from the ground you can split the frequencies and focus the energy much more than you possibly can from 35,000 km up in space. It wasn’t easy for a company with satellite DNA like Inmarsat to convince ourselves that this is the right solution, but if you’ve got the traffic density, there is no doubt about it.”

Inmarsat has cited Gogo’s success as the reason the company has moved to build ATG in Europe, but with primarily ATG-provider Gogo suggesting the technology is a thing of the past, it’s hard to know which way the market is going.

“It seems like the collective wisdom is that ATG will have a place in the in-flight connectivity market, but then you have Gogo — the only actual ATG provider — saying that satellite is the future,” said Andrew Spinola, vice president at Wells Fargo Securities. “I don’t know which technology will win, but it certainly seems likely to me that ATG will have a place in Europe and probably the U.S., as well.”

Much remains to be seen in the way of the future of the connectivity market. Despite the direction, however, each company is moving forward to develop faster, more efficient and, above all, more reliable connectivity.

“Getting more bandwidth to planes is transformative,” Small said, speaking on ways the industry will move forward. “Getting into the connected aircraft and how that platform is and how we open it up in a twisted way to all the aviation ecosystem, that’s transformative.” 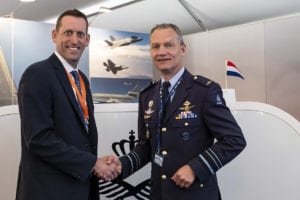