Editor’s Note: How Secure? How Isolated?

How isolated should pilots be while in the cockpit? Put another way, how aware should pilots be of activities in the cabin area behind them? This has been a key question ever since regulatory authorities mandated locked and hardened cockpit doors, following the terrorist hijackings of 9/11.

The regulatory community offers a mixed bag of guidance regarding cabin surveillance, as we report in our story on page 34. Several countries have mandated the installation of closed-circuit TV (CCTV) systems in the cabin, but most of the world, including the United States and Europe, has not explicitly required video monitoring--although the U.S. Federal Aviation Administration reportedly plans soon to issue a notice of proposed rulemaking that covers cabin surveillance. Most agencies have published only wording to the effect that pilots must have some means of viewing the cabin area next to the cockpit door. The range of systems the airlines have thus far installed runs the gamut, from a mere peephole on the hardened door to a multicamera CCTV system that shows the entire cabin area.

The German aircraft support organization, Lufthansa Technik, has proposed perhaps the ultimate step in cabin surveillance. It has developed a wireless handheld device that allows pilots to view the aircraft interior behind the cockpit, even while in the toilet. It makes sense, given the fact that a terrorist or hijacker could accost a pilot coming out of the lavatory just as easily as accosting him as he exits the cockpit. With a Palm Pilot-like device showing imagery from a camera outside the toilet, a pilot can safely open the lavatory door and return to the cockpit.

And what if the terrorist or hijacker is skulking in an unlocked toilet, waiting to assault an unsuspecting crewman while entering? Lufthansa Technik has an answer for that scenario, too, proposing an infrared sensor that would detect body heat to indicate whether the toilet is occupied.

No airline has, as yet, ordered these security components, according to a Lufthansa Technik official, and some persons may believe such extensive cabin monitoring would be overkill. But there are airlines that have taken the initiative to make the cabins in their aircraft more secure--and they have quite wisely gone beyond peepholes.

Tom Anderson, senior vice president-technical operations and aircraft programs with the low-cost carrier, JetBlue, believes the airlines should have considered installing CCTV in their aircraft prior to Sept. 11, 2001. He believes the flight crew should be aware of any threat of terrorism, hijacking or air rage, or know if a passenger is seriously ill--not an uncommon occurrence. JetBlue has installed multicamera systems in its fleet of Airbus A320s. Its pilots monitor the CCTV imagery on screens identical to those in the cabin, where passengers can view live TV, another unique JetBlue feature.

"In fact, we leverage our LiveTV system by pumping the Weather Channel into the cockpit," says Anderson. "So in addition to monitoring the cabin, the pilots take a strategic look at the weather."

Is there a marketing advantage to providing greater security? Anderson claims his airline does little to inform passengers of onboard security, other than to place a notice on the cockpit door that says the cabin is being monitored. "But I think there is an advantage in that the passengers [reading the notice] may feel safer and more secure and that we're not cutting costs in this area."

The cost of cabin surveillance is why many airlines--most notably cash-strapped U.S. carriers--have delayed the installation of CCTV--and may well continue delaying until they are mandated to equip. However, the airlines that have equipped their fleets have no doubt regarding the wisdom of their decision. Anderson believes the use of CCTV is long overdue. Says the British Airways official, "It's something that had to be done."

Avionics Magazine has expanded its editorial staff. Now working with senior editor Charlotte Adams and myself is our new associate editor, Matt Matarozza. An experienced journalist, Matt came to us after a stint in the financial community. With his expertise, we look forward to producing an even better Avionics Magazine. 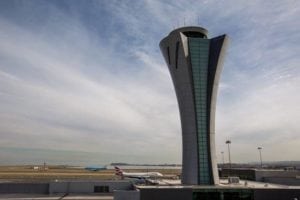 Should the US Ban In-flight Calling?