Outlook 2004: Ready for a Resurgence?

Will we soon see the overlap of a resurgent civil aviation market on a strong military aviation market? Such doubly good fortune could occur. Signs of recovery and optimism are emerging.

For several years the airlines, especially the U.S. carriers since 9/11, have been on a financial slide. Business aviation, too, has lost momentum after a peak year in aircraft deliveries in 2001. The slump in these two avionics-intensive markets has delivered a "double whammy" to the aerospace electronics industry. The one bright spot has been the military market, which probably will continue to grow.

However, 2004 may mark the beginning of civil aviation’s economic recovery. In the air transport arena, the SARS epidemic appears to be in check, and the U.S. economy appears to be rebounding. Two years after the U.S. stock market bottomed out in October 2002, the Dow Jones Industrial Average gained 32 percent and the Nasdaq composite index soared by 70 percent. Economies around the globe are expected to follow the U.S. lead, boosting both the air transport and business aircraft markets. The chance of another large-scale terrorist act, of course, remains in question, and such an incident would nullify any industry forecast.

Compiling information from various sources–primarily from the analyst and consulting group, Frost & Sullivan (F&S)–Avionics Magazine offers its annual outlook of the avionics market, influenced by the total aviation market. Generally, we found that it is not time to pop the champagne cork yet, but there are positive indicators.

Overall, F&S forecasts the annual growth rate in the worldwide commercial avionics market to reach 6 percent by 2007. Annual revenues will rise from $4.99 billion to $5.88 billion between 2002 and 2007. Broken down by system types, the landscape looks as follows:

Implementation of CNS/ATM (communication, navigation, surveillance/air traffic management) continues to drive modernization of the air transport fleet, although in the current economic environment, airlines will equip to modernize only if the equipage provides a fairly quick (within a year) return on investment. The technologies to watch, according to F&S, are data link communications, automatic dependent surveillance-broadcast (ADS-B), and 1090 extended squitter (ES). Data link communications will accelerate in Europe this year, with carriers preparing to participate in Eurocontrol’s Link 2000+ program. In addition, a growing number of ADS-B applications are being discovered by the Federal Aviation Administration’s (FAA’s) Capstone program in Alaska and ongoing activities among U.S. air cargo carriers. And 1090ES was a key topic of discussion at the 11th annual Air Navigation Conference held last year in Montreal. "Parts of the world have decided to use Mode S [1090] with extended squitter, and they wanted to make it known that perhaps it should be the global choice for the ADS-B data link," says an International Civil Aviation Organization (ICAO) official.

Mandated equipage has sustained, and will continue to benefit avionics manufacturers and installers, too. For instance, all civil operators that choose to fly in flight levels (FL) 290 to 410 must be mindful of the near universal application of reduced vertical separation minimum (RVSM). Domestic RVSM (DRVSM) requires equipage that safely allows vertical separation of 1,000 feet (instead of the previous 2,000 feet) in the FL 290 to 410 airspace over the United States by Jan. 20, 2005. The U.S. follows Europe, the North Atlantic, Asia-Pacific and other parts of the world in adopting DRVSM.

Some 95 percent of the air transport fleet is already RVSM-compliant, according to Michel Merluzeau, principal analyst with F&S. But he estimates that only about 25 percent of the approximately 6,500 business jet aircraft that require equipment upgrade in the United States is compliant, and that could cause a capacity crunch for the shops providing RVSM upgrades.

FAA has established new mandates for TAWS, as well. The agency requires that all turbine airplanes that are configured for six or more passengers, manufactured before March 29, 2002, and used in Part 91 and Part 135 operations, must be equipped with a class-B TAWS by March 29, 2005. Part 135 aircraft of comparable age that seat 10 or more passengers must be equipped with a class-A TAWS by that date.

Given the 2005 deadline and the $300,000-and-up price tag to upgrade an aircraft with TAWS and for RVSM, service centers in the United States should enjoy a busy and lucrative year in 2004.

On the horizon, aircraft operators required to have emergency locator transmitters (ELTs) on board should be mindful that in 2009 the 121.5-MHz ELTs must be replaced by the much more accurate, satellite-based 406-MHz units. Acknowledging that the satellite-based ELTs are more expensive, Merluzeau maintains that operators should be buying 406-MHz units now. "The aviation industry, and users in particular, need to be educated of the 406 ELT’s benefits."

The recovery’s full effect is not expected this year, however. In March 2003 FAA revised its forecast of air transport’s growth. Rather than predicting that passenger traffic would regain pre-9/11 levels by fiscal year (FY) 2004, the agency now believes the recovery will occur no sooner than FY 2005. In turn, this could cause a delay in acquisitions and upgrades for up to two years.

Still, anecdotal evidence indicates that the recovery will come to the airline industry soon. For example, United Airlines recently posted monthly profits and expects to emerge from Chapter 11 bankruptcy early this year. And China Airlines posted record third-quarter profits in late 2003–evidence that the SARS epidemic may be under control.

But perhaps more dramatic than the air transport market’s recovery is its restructuring. Aircraft and avionics manufacturers face a much different air travel landscape from the situation several years ago.

"The mainline airlines have dramatically shrunk over the past two years, while regional airlines and low-cost airlines have continued to expand," according to a study of the U.S. air transport market conducted for the Regional Airline Association (RAA) by Raymond James Associates. The RAA study observes that the main carriers have "turned to their regional affiliates to provide market presence where the mainline jets no longer operate profitably," and regional aircraft "now account for 20 percent of the domestic [U.S.] seats flown."

The study predicts 10 percent growth in the worldwide regional jet market over the next decade, handily offsetting the 5 percent decline in regional turbo-prop aircraft. It foresees the regional jet share of air transport market to nearly double over the next decade, from 11 percent to 20 percent. F&S predicts that aircraft deliveries to regional carriers worldwide will grow from 391 in 2003 to 502 in 2008, a 28 percent increase.

Low-cost carriers (LCCs) represent another bright spot in air transport. Experts predict that growth of the LCC market in Europe will exceed that of traditional carriers by more than four times. And plans are moving forward to construct a third airport in Chicago, largely to serve LCCs.

Traditionally, growth in the LCC market has left little positive impact on the in-flight entertainment (IFE) industry, but that, too, may change. In fact, LCC carrier JetBlue is now joined by Frontier Airlines, Delta’s new Song airline, and Canada’s WestJet in providing live onboard TV. Establishing longer non-stop routes, long-time LCC Southwest Airlines may find it must follow suit.

In terms of new aircraft sales, both Airbus and Boeing have predicted long-term growth of about 5 percent. This accounts for a doubling of the number of airline passengers in 15 years and a tripling in 23 years, according to a Boeing forecast.

As the stock market steadily climbs and fractional ownership grows (albeit at a slower rate), the business aircraft market would appear to be poised for resurgence in sales. Honeywell Aerospace, in its annual Global Business Aviation Outlook, predicts robust growth in the market, with some 7,700 new business jet aircraft worth more than $115 billion being delivered by 2013. The Teal Group also predicts strong growth in the business aviation market beginning in 2006, but is less bullish. It foresees fewer than 6,100 new bizjets sold at a total worth of $98 billion. Looking as far ahead as 2021, Rolls-Royce projects 14,670 bizjet deliveries, 40 percent of which will be replacement aircraft.

Rolls-Royce cites the new entry-level jets–the Raytheon Premier 1, Cessna CJ1 and 2, and the Sino Swearingen SJ30-2–as major contributors to business aviation’s growth. In addition, the expense of meeting RVSM and TAWS mandates probably will convince some corporate aircraft operators to replace their planes with new ones.

Business aviation represents a distant second to the air transport market, with just a 15 percent share. Nevertheless, bizjets remain the pioneers of many new systems, as is evident in the growing interest in infrared sensors for enhanced vision, often presented on a head-up display.

The business aviation sector accounted for some $739 million in avionics sales in 2002. F&S believes that figure will climb to more than $946 million by 2007, representing a 5 to 6 percent annual growth rate.

F&S predicts anemic growth in avionics sales for the general aviation (private aircraft owner) sector. It foresees a minor increase in revenues, from $466 million in 2002 to just $471 million in 2007. Despite an improving economy and the introduction of new aircraft, such as the Cirrus SR20 and Lancair Columbia 300, private aircraft owners "are going to be more careful in today’s geopolitical and economic environment," says Merluzeau. "Job security and just the general feeling of security are factors."

Multiple factors are driving the military aviation market’s growth, according to F&S. Avionics manufacturers are expected to benefit from the new generation of combat aircraft–F-22, Rafale, Eurofighter and Tiger–over the next several decades. They also will benefit from global air traffic management (GATM) upgrades; the increased application of unmanned air vehicles (UAVs), which are redefining systems architecture and C4ISR requirements; and emphasis on data communications, or data sharing, and bandwidth in a network centric warfare environment. (C4ISR stands for command, control, communications, intelligence, surveillance and reconnaissance.) F&S now forecasts a $3.5 billion market by 2006.

A niche market to watch is special operations, says Merluzeau, and it could change military acquisition. "Military leaders are saying, ‘we have a mission–now what do we need to accomplish the mission,’ and avionics companies will have to respond faster to the defense community, especially to the special mission people," he advises.

"You will see a lot of standardization of avionics in the military," Merluzeau adds. The standarization "will be cross-service and even cross-country." Further evidence of the standardization trend rests in the fact that "trainer aircraft are including avionics that duplicate the systems in the front-line aircraft," he says.

Growth in military aviation is expected to extend beyond Europe and the U.S. "Asia will see a strong arms race unmatched since World War II," says Merluzeau. "Japan is re-arming–it’s a big market–and Taiwan is still equipping, and China is leaning toward modernizing its military because it has a lot of 25-plus-year-old systems and is far from being combat capable against the U.S. miliatary, for example."

Merluzeau believes the Chinese feel a sense of urgency to modernize after the U.S. takeover of Iraq. "Realizing that a country can be taken over with just 70,000 men on the ground was a wakeup call for China," he explains. "They witnessed the advantage of air superiority and C4ISR information dissemination." 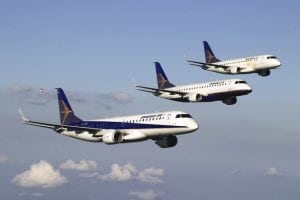 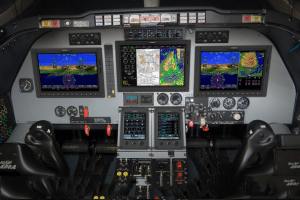