As everyone knows, the success of radio frequency (RF) applications depends as much upon the antenna as upon the electronics behind it.A new satellite-based airborne communications network developed by ARINC Inc., for example, seeks to introduce "true" broadband connectivity to the corporate jet market. ARINC will be the service provider; ViaSat will build the ground equipment and, in partnership with Rantec Microwave Systems, will provide the avionics. SES Americom, an investor and partner in the service, will provide the Ku-band satellites.

The airborne antenna is a two-way, stabilized dish designed for mounting in the tail pod of large business aircraft. The 11.5-inch- (29.2-cm) diameter, mechanically steered antenna stays pointed at the satellite, maintaining communications connectivity while the aircraft is maneuvering at high speeds. It will be the first single-aperture, receive/transmit Ku-band antenna to be commercially available for business aircraft, according to Bill Sullivan, managing director of integrated systems for ViaSat. It also employs an innovative feed design to meet stringent RF requirements. When combined with ViaSat’s proprietary waveforms and access techniques, the unit meets the system-level requirements needed to operate such a small antenna in the Fixed Satellite Service band.

The access techniques, based on ViaSat’s ArcLight very small aperture terminal (VSAT) product, can support "a few hundred" aircraft with each satellite transponder. While the SKYLink system is designed to support up to 10 megabits/sec (Mbits/sec) in the forward link (ground-to-aircraft) and 512 kilobits/sec (Kbits/sec) in the return link (aircraft-to-ground), it will initially be operated at 3.5 Mbits/sec and 128 Kbits/sec, respectively.

ARINC expects to have production avionics equipment available in September and to initiate SKYLink service in North America the following month. Current plans are to expand the service into the North Atlantic and over Europe, as interest grows.

Gulfstream is the launch customer, and ARINC flight-tested a receive-only version of the system on both a Gulfstream G-IV and a Cessna Citation X aircraft last year.

The design received Federal Communications Commission experimental approval for development and test, and a permanent FCC license has been requested. Web browsing and virtual private network connectivity will be possible at "reasonable speeds," and SKYLink will be more like a cable modem or DSL line, compared with the Inmarsat Swift64 service’s (64-Kbit/sec) dial-up-equivalent speeds, Sullivan says.

Video conferencing and live, Internet streaming video also will be possible, using SKYLink premium services, says Bob Thompson, ARINC’s director of broadband services for SKYLink. The antenna also can be used with a satellite TV receiver. At the present time SKYLink will not compete directly with Inmarsat, he says. "Our coverage is currently the continental United States, but we will be rolling out the service on a global basis." A voice component also is expected, using a voice over Internet protocol (VOIP) application.

On the military side, there is interest is antennas mounted on small unmanned air vehicles (UAVs) that could provide reconnaissance and target identification in difficult areas such as urban terrain. UAVs also could function as communications relay or electronic warfare platforms. A recent broad area announcement (BAA) from the Defense Advanced Research Projects Agency solicited ideas on antenna concepts for UAVs and other vehicles, to implement high-bandwidth data links and networks.

One candidate for multifunction data link antenna applications is geodesic cone phased array technology. This approach has been demonstrated by EMS Technologies in a shipboard directional jamming application. Scalable to platform and gain requirements, the design would be less complex and expensive than comparable two-dimensional, planar phased arrays, says Mike Guler, principal engineer for EMS’ antenna unit in Atlanta. Fewer feed points and a less complex feed network structure would be required for the same task. "The novel part of the antenna is the high diversity of beams it can produce," precisely controllable in azimuth over 360 degrees, Guler says. Full hemispheric coverage is possible in a smaller package than would be required by a planar array. The system also supports adaptive nulling and difference patterns for anti-jam and target tracking, respectively. And multibeam and control characteristics make it suitable as a data link hub or comm relay, mounted on the belly of an aircraft or UAV. The approach targets the need for high-bandwidth dissemination of sensor and command and control data in light and inexpensive antenna solutions.

In the UHF satcom niche, EDO Corp. has developed a conformal patch antenna, measuring 14.5 inches (36.8 cm) on a side and 2.5 inches (6.4 cm) deep, less than half the size of comparable UHF devices. The 12-pound (5.4-kg), omnidirectional cavity radiator design will be the first operational UHF satcom antenna on a strike aircraft, the company claims. EDO’s customer, Alenia, is buying the C196 products for installation on Italian Air Force Tornados.

There is also interest in low-cost, proven data and voice communications links for UAVs and small aircraft, using commercial Iridium and Global Star satellites. Lockheed Martin has flight-tested an Iridium antenna developed by Sensor Systems on an F-16, demonstrating both voice and data applications. The 3.5-inch-diameter (8.9-cm) antenna, weighing only 6 ounces (168 grams), is conformal to the fuselage. It transmits and receives over the Iridium frequencies and receives on the GPS bands. Although not high-bandwidth, the link could provide UAV positioning data, flight plan redesignation and still images. Units are being used on military UAVs. Sensor Systems also is working with a military prime contractor to develop a multipurpose Iridium/Global Star antenna.

The military also wants to be able to control multiple UAVs from a single ground station. ITT’s Gilfillan Group last year operated a Ku-band, flat-plate, phased array antenna under an advanced concept technology demonstration program with the Naval Surface Warfare Center. The system, made up of two 12-by-12-inch (30.5-by-30.5-cm) array faces–one for transmit and one for receive–maintained two duplex links at rates of 274 Mbits/sec, as well as two duplex links at 10.7 Mbits/sec, simultaneously. 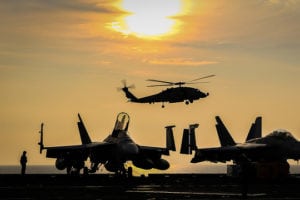 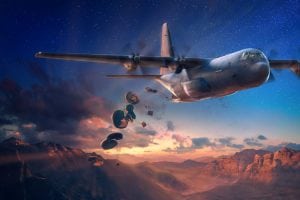