Safety in Avionics: The Dreadle Solution

The deadliest accident in the history of Italian aviation provides a grim reminder that the most dangerous part of any flight is not in the air. It is on the tarmac, where airplanes taking off or landing are commingled with airplanes taxiing, crossing runways or holding in position at the end of an active runway. Add night, rain, snow, fog or fouled-up communications and the hazard is enough to give pilots and tower controllers plenty of sweaty-palmed anxiety.

The operative term is "runway incursions," but many of the incidents are near- collisions. Ground surveillance radars can help forestall outright collisions, if controllers aren’t distracted and keep a sharp eye on their displays. However, a simpler, lower-cost solution could be developed, which guarantees audio alerts over the radio and is less susceptible to human error.

Ground surveillance radar was not available on the foggy morning of Sept. 8 at Italy’s Linate Airport near Milan, when many of the traditional elements of runway collisions were in play. A Cessna Citation II business jet taxied onto an active runway, invisible in the fog, smack into the path of an SAS MD-87 on takeoff. The MD-87’s nosewheel probably had just lifted into the air. The planes collided and the MD-87 veered into a nearby baggage-handling depot. All 110 passengers and crew on the MD-87, and the two pilots and two passengers in the Citation, were killed. The accident involved more than the total loss of life in both aircraft, as four ground personnel were killed, bringing the total to 118 dead. That toll made the accident, now under three separate investigations, Italy’s worst, surpassing the 115 killed when an Alitalia DC-8 slammed into a Sicilian mountainside near Palermo in 1972.

That 1972 accident was typical of the threat then, one so pervasive it acquired its own acronym: controlled flight into terrain (CFIT). With advances in ground proximity warning systems, the CFIT threat has been blunted. Runway collisions are fast becoming the No. 1 operational menace.

Authorities therefore have been looking to ground surveillance systems to track aircraft and vehicles at airports. An older ground radar at Linate had been decommissioned, but the new Aerodrome Surveillance Monitoring Indicator (ASMI), delivered in 1996 from Norway, had not been installed and put in operation.

One can imagine the plaintive pleading to the judge some months hence: "Yes, your honor, we’d planned to install it just before the next accident. We definitely had it. The old one never really worked, so we had to go for the newer one."

The magnitude of this wholly unnecessary tragedy puts a new dimension to the shopworn phrase, the "human comedy."

The ground radars, though, are not foolproof. A busy controller may not always catch the fact that a pilot has overshot a taxiway stop line. The radar is only as alert as the human eyeballs watching the screen. Furthermore, the Federal Aviation Administration’s primary anti-incursion warning system, the Airport Movement Area Safety System (AMASS), by design, provides collision warnings only to controllers, who would have to relay an alert to flight crews.

Another approach, an Automatic Dependent Surveillance-Broadcast (ADS-B) incursion alerting system, has a similar "attentional" limitation. The pilots must notice when they are making a mistake. According to this system’s descriptive literature, ADS-B will provide a moving map of the airport surface on a cockpit display and "trigger runway occupancy alerts."

All well and good, but ADS-B may be rather one-sided. The big jets might have it, but not necessarily the business jets, other general aviation aircraft, snow plows, maintenance and other service vehicles. The ADS-B approach conjures this pleading: "Your honor, I was looking at the screen to figure out why it was blinking–never saw that before–when something big hit us."

John Sampson, a onetime transport-category pilot, sees a simpler, more reliable approach, one that would warn over the radio of impending runway incursions simultaneously in the tower and in the cockpit. He calls it the Dreadle concept. The term is play on words, combining the "dread" of runway collisions with "treadle," a taxi-over actuator long used at Naval Air Stations to actuate the pass-through rinse racks when washing aircraft. The term speaks volumes.

"If each runway entry point or intermediate taxi crossing intersection had a treadle (weight-actuated) incursion alarm blatting out on tower and ground frequencies, each incipient incursion would immediately cause an attention-getting warbling tone and message," he explains. The alarm would alert pilots operating in the pattern, on ILS finals, taxiing, and lined up on the runway or rolling. "Any pilot who thought he’d triggered that audible alarm would immediately stop and check for the hazard aircraft," Sampson says.

"Vehicular traffic–sweepers, follow-me vehicles, catering vans, etc.–also would trigger alerts and themselves would be warned immediately of their infractions, working on the principle that all authorized vehicles will be radio-equipped and maintaining a listening watch," he adds.

The treadles would take the form of twin pressure-sensitive transducers placed a few feet apart and similar to traffic counters seen on highways. The treadles, associated logic circuitry and plumbing are not that daunting a technological challenge.

Why two treadles? Sampson explains: "Aircraft entering runways would trigger the warbler of an armed system by an A-to-B progression, and aircraft clearing the runway on taxi-in to the ramp would not, because they would represent a B-to-A progression across the treadles."

Sampson argues: "Because the problem is runway incursions, you have to put the burglar alarm on the runway access itself."

The treadle could be coupled to the high-intensity approach lighting (HIAL). The lights would pulse (rather than flash or hold steady) whenever an aircraft is cleared to line up for takeoff. This feature covers the case where a controller lines up an aircraft and then forgets about it while he’s trying to negotiate a departure clearance, Sampson explains. "The controller gets a call from another aircraft inside five miles on finals and clears it to land, forgetting that he’s got one aircraft lined up," he adds.

"Pulsing HIAL would simply tell the aircraft on finals in low-visibility operations that the runway was armed for takeoff, so a go-around should be anticipated. In normal circumstances, once the departing aircraft takes off, the HIAL lights would be returned to steady," says Sampson. He believes the pulsing light feature would also work "as a safety bolster in conditions of relatively good visibility."

Sampson suggests as a sensible adjunct to the Dreadle system that all aircraft be fitted with detector-operated strobe and landing lights which will automatically illuminate when the aircraft enters or crosses a Dreadle-armed runway, i.e., one that a pilot should not be entering.

"Many of us have infrared-detecting security lights at our homes that turn on when [we enter] the driveway," Sampson observes. "It’s not mind-blowing technology to imagine a short-range, treadle-activated transmitter that would illuminate aircraft strobes. This would add to the automated VHF radio broadcast of a "WHOOP, WHOOP, WHOOP" ululation the following message: "Dreadle alert. Caution. Unauthorized runway incursion."

The perpetrator would be lit up like a Christmas tree. Avoiding this sort of notoriety should keep pilots and controllers on their toes, averting the occasional accident.

Sampson estimates that a limited array of five paired treadles could have helped to prevent the loss of life at Linate. The beautiful simplicity of the Dreadle concept is that any incursion over an armed treadle pair triggers an immediate warning of an incursion over the radio. Most importantly, it is not reliant upon a busy tower controller monitoring a radar display.

In this respect, the postmortem of the tragic crash at Linate provides an opportunity. "Dreadle without delay" should be the call to arms for developing and deploying this viable solution to runway collisions. 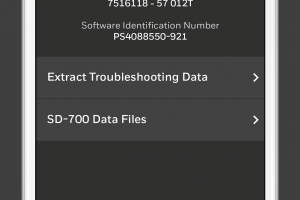 iPads and Next Generation Avionics Technology