KLM Royal Dutch Airlines CEO says the Netherlands-based carrier is still open to embracing innovation and new technologies amid the impact of the COVID-19 coronavirus on their airlines' operations. (Eurocontrol)

Elbers discussed a range of different topics during Eurocontrol's Aviation Hard Talks Oct. 15 webcast, two weeks after his airline submitted a restructuring plan to the Netherlands government for a loan of $3.4 billion Euros that includes a workforce reduction that will see KLM eliminate 4,500 jobs by the end of 2020. Recalling an incident in May 2011 where ash formed from an Icelandic volcano shut down hundreds of flights in European airspace, Elbers said that previous crisis events have lead to innovation and adaption to a new operational normal for the industry.

As an example, the volcanic ash incident forced the airline to invest more in digital communications after it saw how useful social media was for communicating updates to passengers with canceled flights. He expects the current pandemic to drive the adoption of new technologies as well.

"The call centers, they couldn’t handle the enormous volume of calls and social media was the way to communicate and it kick-started really our innovation and our digital trajectory towards communications with our customers," Elbers said. "If I see some of the challenges we have today in the field of sustainability, in the field of predictability, in the field of being agile with your company and to communicate your clients,  I think this will help new things like artificial intelligence, using things like bots for quick communications to our customers, so next to the crisis management, I feel we should embrace some of the technological advancements we have in order to build a better future for the industry.”

Elbers recently celebrated such innovation with the activation of a new robot system by KLM Catering Services (KCS) that will "reduce handling costs and make it easier to effect meal tray adjustments," according to a Sept. 30 press release. KLM has given little details on how the robot will operate other than Elbers mentioning the system will cut passenger meal production costs and adjust meal trays and is to serve as one of the airline's initial steps toward further mechanization of its catering services. 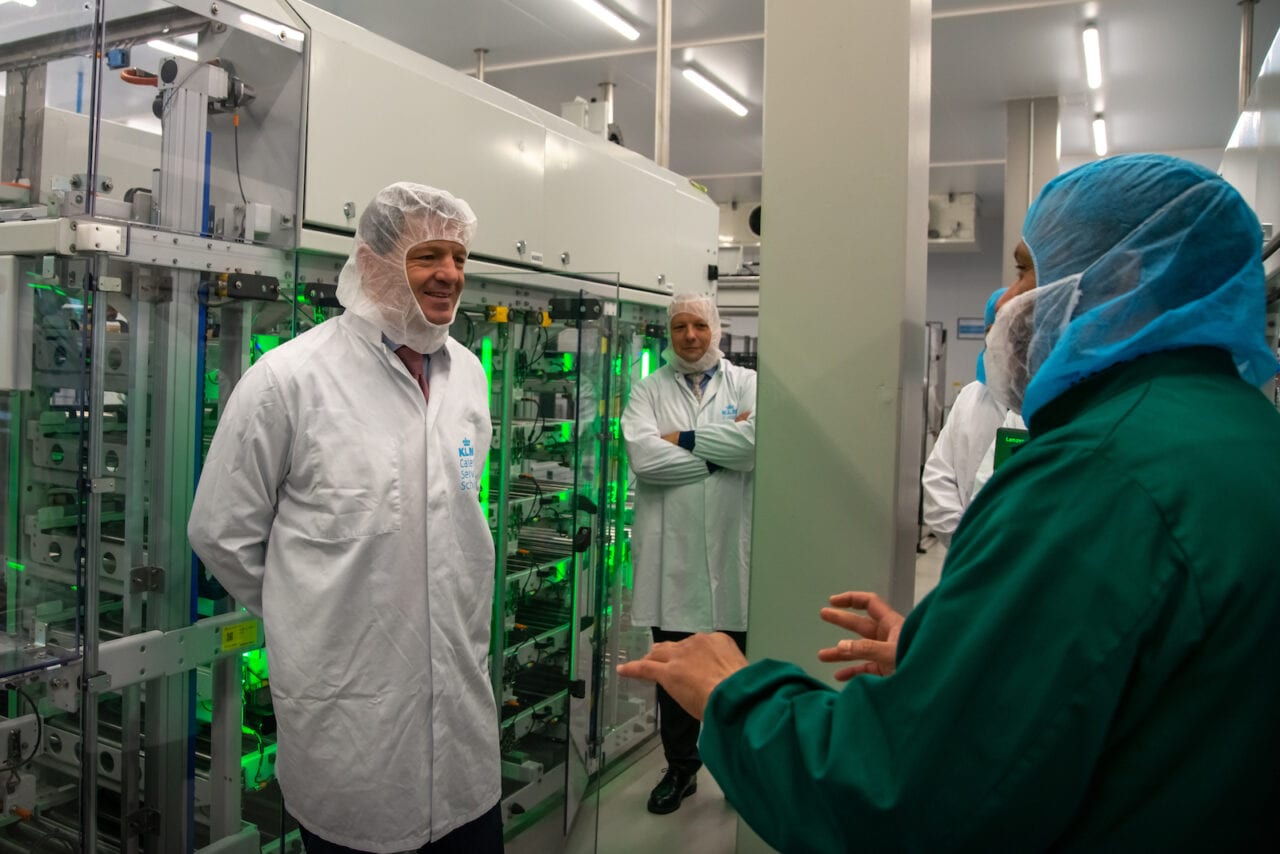 KLM's CEO celebrates the unveiling of a new robot system that is the airline's first initial step toward enabling more automation and mechanization into their in-flight catering process. (KLM Royal Dutch Airlines)

Throughout Europe, the number of positive COVID-19 cases are on the rise again, in what Elbers acknowledged as a second wave that is causing uncertainty regarding which individual countries passengers can or cannot travel to without being quarantined. The UK, Germany, Italy, Poland, and the Czech Republic, alongside other nations, have all recorded their highest-ever confirmed rates of positive COVID-19 infections in October, according to an Oct. 18 CNN article covering the region's challenge dealing with a rise in new cases.

Eurocontrol Director General, Eamonn Brennan, also gave an update on how the return of lockdowns in Europe is impacting air travel. European airline flight operations were collectively down 56 percent during the second week of October compared to the same period a year ago, according to Brennan.

"What's happening is that the second wave is hitting Europe, governments are taking actions, and this morning it was interesting to note that the European Commission was asking again for governments to act in a coordinated manner. We cannot get certainty into the industry until this happens," Brennan said.

Ryanair and Easyjet, the two largest low-cost carriers in Europe, have operated the highest number of flights in recent months, reflecting a trend that exists in the Asia Pacific, Middle East, and North American markets as well. The majority of air travel that is happening in Europe and elsewhere is primarily regionally on shorter haul mostly leisure routes. 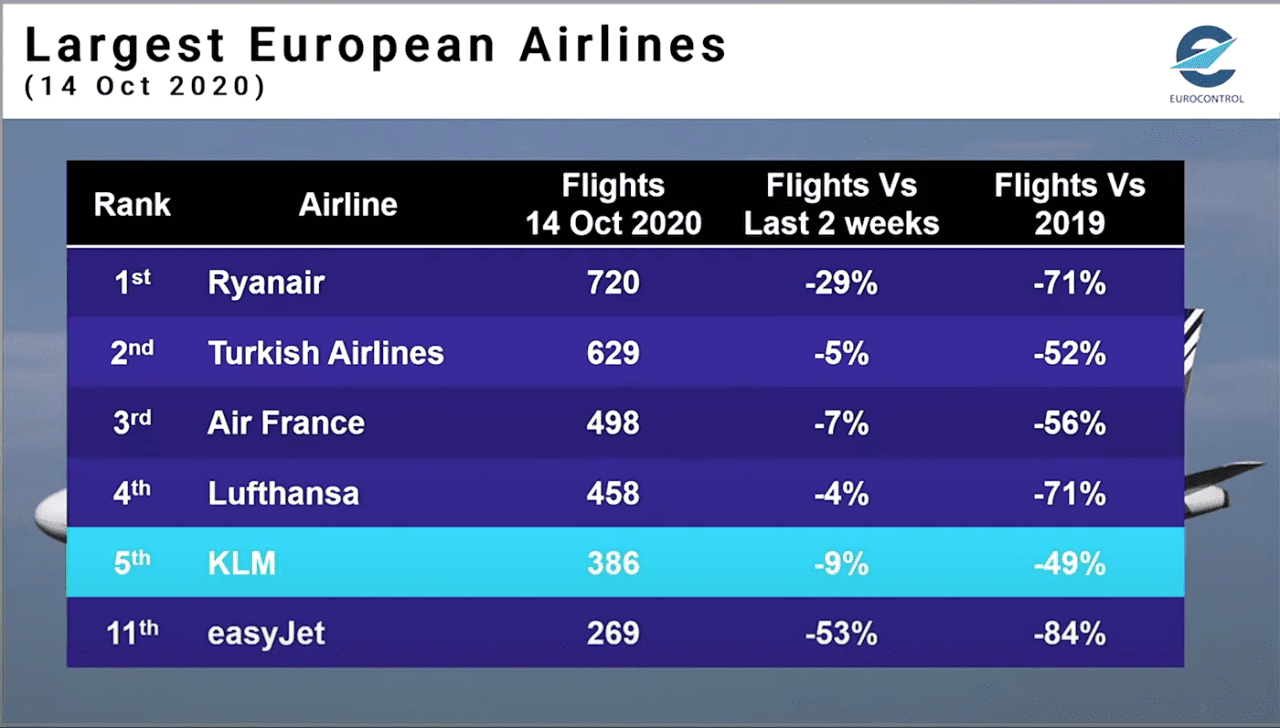 A snapshot of passenger traffic numbers for the some of the largest airlines in Europe. (Eurocontrol)

Elbers said this type of flying sets KLM up well for the future despite the workforce reductions and challenges to passenger demand they’re currently experiencing amid the second wave. Over the next decade, Elbers said he expects the long-term impact of COVID-19 to lead to increased consolidation among European carriers as well, but first the industry has to get back to normal operational levels.

“Every crisis in the past has lead to consolidation and innovation and new dynamics,” Elbers said.

“Probably Europe is lagging behind the U.S. about 10 years in terms of consolidation, well look at how the US looks today, you’ll probably know how Europe will look 10 years from now. There’s probably going to be a few large low-cost carriers and a few big systems like we see actually today already emerging with the Air France KLM group, the Lufthansa group the IAG group, and there’s going to be some new contenders or regional contenders in that system."

Boeing to Develop New Radio System for US Air Force