[Avionics Today 08-29-2016] General Aviation (GA) pilots flying solo could soon find themselves with a new kind of co-pilot: a virtual one. In an effort to enhance safety and reduce the workload for GA pilots, non-profit aviation organization MITRE has developed a set of digital capabilities, compatible with iPads or other tablets, that aim to act as a co-pilot for solo GA operators. According to MITRE, the Digital Copilot can respond to spoken commands, look up and provide information orally, as well as intuitively determine what the pilot is trying to do and respond by issuing notifications, alerts, and updates as needed, through a set of algorithms developed by MITRE engineers.

While MITRE, as a non-profit, cannot bring the application to market, they are currently working to introduce the capability to manufacturers with the hope it will be incorporated into existing or new Electronic Flight Bag (EFB) applications to enhance GA safety, which is currently lacking.

“There are many reasons why the airlines have a better safety record than general aviation; for example, many GA aircraft don’t have redundant equipment or multiple engines. Also, a large portion of GA pilots are flying recreationally, which means they tend to fly less often and have less overall experience. On top of that, the majority of the GA pilots are flying solo, which means they take on all the workload and don’t have a second pair of eyes to cross-check what they’re doing,” said John Helleberg, group leader of the human-centered flight deck research and engineering at MITRE’s Center for Advanced Aviation System Development, which aims to develop and provide the FAA and aviation industry with advanced technical capabilities.

According to the Joseph T. Nall report published by the Aircraft Owners and Pilots Association (AOPA), in 2013, the last year when complete data was available, there were a total of 1,185 general aviation accidents and 205 involved fatalities. While it’s difficult to find statistics that differentiate between single and dual-pilot operations, Robert E. Breiling Associates’ 2015 Turbine Aircraft Accident Review, found the accident rate for turbine aircraft certified for single-pilot operations is about 3.4 times higher with a fatality rate about 13 times higher, when compared to the rate of aircraft requiring two pilots.

“We recognized there was a need for an improvement to safety and our vision was to help pilots and that is what spurred the work toward the Digital Copilot,” said Helleberg.

The safety features in the Digital Copilot are mainly aimed around organizing and controlling the glut of flight, weather and navigation information pilots receive during flight.

“The GA pilot that is flying solo has to deal with the same amount of information as dual-piloted aircraft, but they have to deal with it by themselves. When they are flying, they have information related to where the aircraft’s position is relative to airspace or airports, known weather conditions, they have to be able to look up information about airports that they are departing from or flying to, as well as traffic frequencies, traffic pattern altitudes, special information relative to operations at that given airport, and more,” said Matthew Pollack, associate department head for ATM/CNS research computing capability at MITRE’s Center for Advanced Aviation System Development. “A single pilot has to receive the information, make sense of the information, and then make decisions based on that information all while having to maintain control of the aircraft.”

Pollack noted that the flight can become even more workload intense at certain times, such as when a pilot approaches the airport. The Digital Copilot capabilities rely on algorithms and databases of information to reduce this workload, determining relevant information and then releasing it at optimal times throughout the trip.

“Our goal was to develop a set of cognitive assistance algorithms so that the digital co-pilot would be able to anticipate what information the pilot needs and then provide that information to the pilot at the right time,” said Helleberg. For example, the Digital Copilot continuously monitors the flight’s progress toward the destination and can provide communication frequencies and relevant communication information at the appropriate time.

The Digital Copilot can also look up information on demand through voice commands.

“If the pilot wasn’t sure if the control tower would be open at their destination, they can ask the Digital Copilot if the tower will be open, and the Copilot will calculate how long it will take the pilot to get to the airport and use a database stored in the device to determine the correct answer,” said Helleberg, noting that this way the pilot doesn’t have to go digging through flight manuals or try to calculate the time en route to the destination.

While the system doesn’t require In-Flight Connectivity (IFC) or the ability to interface with avionics or other aircraft systems in order to function, Helleberg notes that the technology could certainly benefit from the extra information provided by these connections. However, it will be up to the manufacturers who eventually bring the technology to market to determine exactly how it is incorporated into EFB applications.

“The technology is not intended to stand alone and is not intended to be marketed as such. Really, the intent is to create these capabilities, investigate their potential benefit to safety and see them transferred to industry and incorporated by the developers of the electronic flight bags that are already on the market,” said Pollack.

Thus far, the technology has only been validated on GA flights through MITRE, which stresses this is just the beginning of the process to bring the technology to GA pilots.

“The intent is to make the technology available to industry partners that can then make those technologies available through their product. This is just the beginning of our outreach effort,” said Pollack. 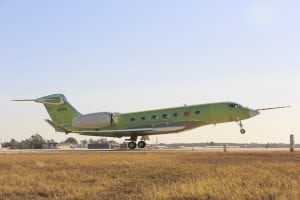