The boom is business aviation is expecting to continue through 2008 as a flood of new jets hit the market and robust international demand lifts the market, according to Honeywell’s annual business aviation outlook. The forecast, issued in conjunction with the National Business Aviation Association (NBAA) annual convention, projects delivery of about 14,000 new business aircraft from 2007 through 2017, generating industry sales of $233 billion. “Industry growth has moved into unparalleled territory,” said Rob Wilson, president, Business & General Aviation, Honeywell Aerospace. “2007 is a record year for the industry … order intake across most business jet categories remains very strong, with little discernable affect from recent stock market fluctuations and with backlogs exceeding two and one half years worth of deliveries, 2008 will likely be another banner year for the industry.” Year-to-date in 2007, the number of aircraft delivered is up almost 11 percent compared with the same point in 2006 and industry-wide sales are up just over 12 percent, according to Honeywell Aerospace. Year-to-date, 446 aircraft worth $8.3 billion were delivered. For the full year, Honeywell forecasts deliveries of more than 1,000 new business jets for the first time in history, up from 861 in 2006. Deliveries in 2008 are expected to exceed 1,300. 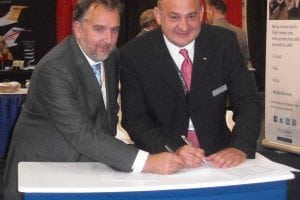